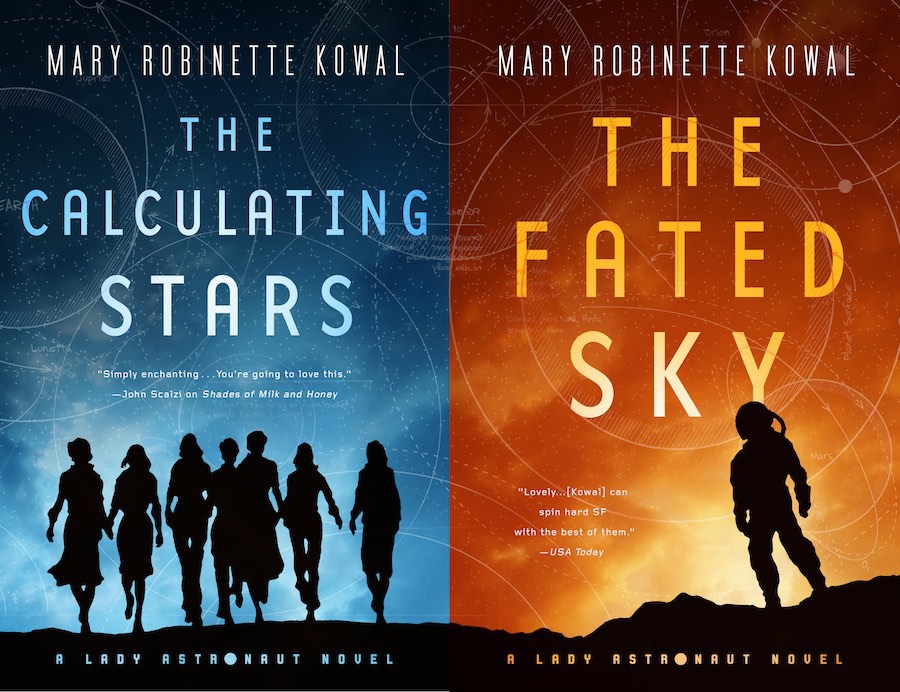 Mary Robinette Kowal’s “The Lady Astronaut of Mars” won the Hugo Award for Best Novelette in 2014 (after some shenanigans that caused it to be weirdly disqualified in 2013). All that — not to mention her other accolades, including multiple Nebula nominations for her popular Glamourist Histories fantasy series — helped make it one of the most talked-about SF stories of the last decade. Read the complete text at Tor.com.

“The Lady Astronaut of Mars” is the tale of Elma York, who led the expedition that paved the way to life on Mars, and the impossible decision she faces when she’s given the opportunity to return to space years later. Mary returns to the world of “Lady Astronaut” with her debut science fiction novel The Calculating Stars, available tomorrow from Tor Books. Fast on its heels is the sequel The Fated Sky, shipping in August. Tor.com offered us the following teaser back in September.

The novels will be prequels, greatly expanding upon the world that was first revealed in “Lady Astronaut.” The first novel, The Calculating Stars will present one perspective of the prequel story, followed closely by the second novel The Fated Sky, which will present an opposite perspective — one tightly woven into the first novel. Kowal elaborates: “The first novel begins on March 3, 1952 about five minutes before a meteorite slams into the Chesapeake Bay and wipes out D.C. I’ve been doing historical fantasy and I keep saying that this is historical science fiction, even though I know full well that ‘alternate history’ is already a genre. It’s so much fun to play in.”

Omnivoracious selected The Calculating Stars as one of 15 Highly Anticipated SFF Reads for Summer 2018, and just today the B&N Sci-Fi and Fantasy Blog picked it as one of the Best Science Fiction & Fantasy Books of July

Here’s the description for The Calculating Stars.

On a cold spring night in 1952, a huge meteorite fell to earth and obliterated much of the east coast of the United States, including Washington D.C. The ensuing climate cataclysm will soon render the earth inhospitable for humanity, as the last such meteorite did for the dinosaurs. This looming threat calls for a radically accelerated effort to colonize space, and requires a much larger share of humanity to take part in the process.

Elma York’s experience as a WASP pilot and mathematician earns her a place in the International Aerospace Coalition’s attempts to put man on the moon, as a calculator. But with so many skilled and experienced women pilots and scientists involved with the program, it doesn’t take long before Elma begins to wonder why they can’t go into space, too.

Elma’s drive to become the first Lady Astronaut is so strong that even the most dearly held conventions of society may not stand a chance against her.

Both books were edited by Liz Gorinsky and are available from Tor. The covers were designed by Jamie Stafford-Hill.

See all our latest coverage of the best new SF & Fantasy here.