Fire Watch was the first collection from Connie Willis, and it had a huge impact on the field. It came in second for the Locus Award for Best Collection in 1986 (beating out George R.R. Martin’s Nightflyers, Larry Niven’s Limits, and Viriconium Nights by M. John Harrison, and losing out only to Stephen King’s Skeleton Crew). Its publication announced the arrival of a major new talent.

Willis  published over half a dozen additional collections in the next 30+ years, including the Locus Award-winning Impossible Things (1994), the monumental 740-page The Winds of Marble Arch and Other Stories (2007), and the Locus Award-winning The Best of Connie Willis (2013), but I think it’s fair to say that this is probably still her most famous. 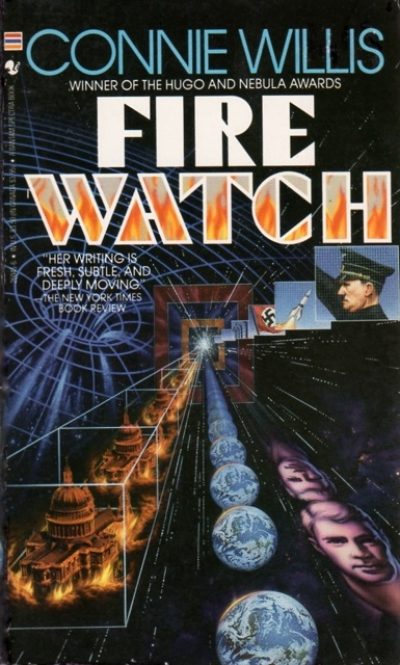 Still, I’m very fond of my 1998 reprint, mostly because of the stompin’ John Jude Palencar cover, which is brilliant. The inside flap includes a list of the other 9 Connie Willis titles Bantam Spectra had in print by 1998; across from that were one-sentence teasers for seven of the dozen stories contained within. 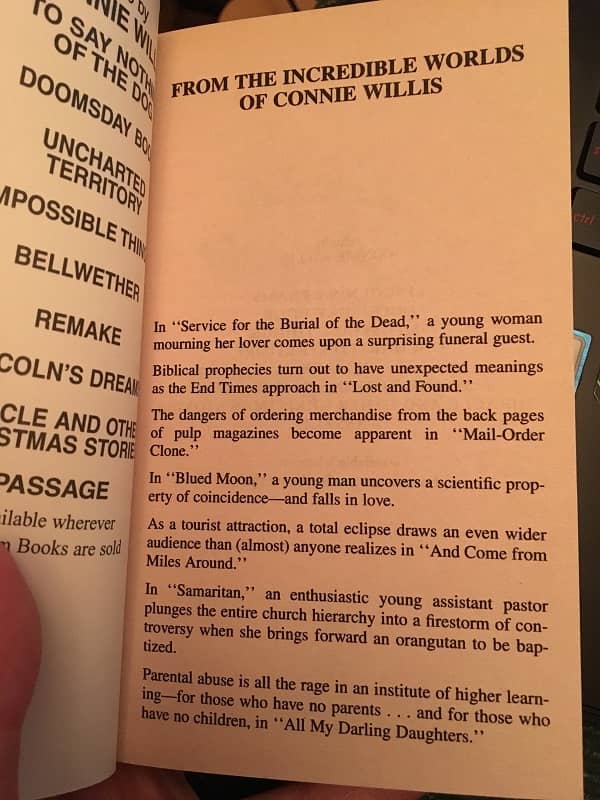 Inside flap, with story descriptions

This is a stellar collection of 12 tales, including the Hugo and Nebula Award-winning title story, “Fire Watch,” which features a time-traveling student and is set in the same milieu as her award-winning novels Doomsday Book and To Say Nothing of the Dog.

It also contains another Nebula Award winner (“A Letter from the Clearys”), one story original to the collection (“All My Darling Daughters”), and multiple award nominees. I’m embarrassed to admit that, aside from some Christmas tales and some scattered short stories, I haven’t read much Connie Willis, so I’m very much looking forward to reading this one straight through.

Here’s the complete TOC, with annotations on the various awards and nominations ‘n such.

Fire Watch was published in paperback by Bantam Spectra in April 1998. It is 272 pages, priced at $7.50. The cover is by John Jude Palencar.

“All My Darling Daughters” was set to appear in NEW DIMENSIONS, I believe, after Marta Randall took over the anthology from Robert Silverberg (I think they did one issue in collaboration), but the publisher killed the series before the book came out.

I forgot all about that! Which is embarrassing, because I wrote about the tragic fate of the last volume of NEW DIMENSIONS right here two years ago:

Several folks, including Robert Silverberg and Darrell Schweitzer, contributed fascinating stuff to the comments on that article, and reader dolphintornsea did some real leg work tracking down the fate of every story in the anthology.