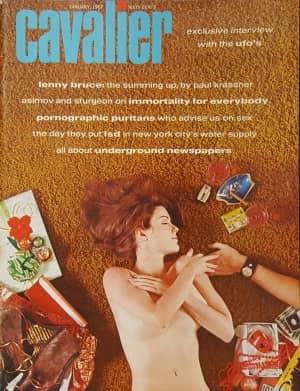 Tenn received a Nebula nomination in 1966 for the short story “The Masculinist Revolt” and his collection Dancing Naked: The Unexpurgated William Tenn was nominated for a Hugo Award for Best Related Work in 2005. In 2006, he received the Forry Award from the Los Angeles Science Fantasy Society (LASFS). He was one of the Pro Guests of Honor at Noreascon 4, the 62nd World Science Fiction Convention, held in Boston, MA.

“The Lemon-Green Spaghetti-Loud Dynamite-Dribble Day” was originally published as “Did Your Coffee Taste Funny This Morning?” in the January 1967 issue of Cavalier, a men’s magazine edited by Robert J. Shea. The same issue carried essays by Isaac Asimov and Theodore Sturgeon. The story gained its current title the following year when Tenn included it in his collection The Square Root of Man. In 1973, it was reprinted in German in Venus—Planet für Männer. Tenn included it, against his better judgement, in the NESFA Press collection Immodest Proposals: The Complete Science Fiction of William Tenn, Volume 1 and selected it for inclusion when Mike Resnick invited him to pick one of his stories for the anthology This Is My Funniest: Leading Science Fiction Writers Present Their Funniest Stories Ever. An audio version was produced for Drabblecast B-Sides #29 in 2013.

The story details a day in Manhattan where Leonard Drucker is awoken by a phone call from his girlfriend asking if he knows what is happening across the city. When he answers groggily, she hangs up after announcing that whatever is happening has happened to him too. In his trek to work, he finds a Manhattan that has gone crazy. Few people are acting normal or caring what is going on around them. Fires and accidents are rampant. Occasionally he sees people who are acting under their own volition, usually taking advantage of the chaotic, surrealist landscape around them.

In conversations with a looter and a dentist who are similarly unaffected by the insanity, Lennie comes to the hypothesis that everyone impacted in the city has drunk tap water and the few unaffected people haven’t had water. The dentist adds the idea that if someone had put LSD into the city’s water supply it could cause the results that they had both witnessed.

Overall, the story is slight, a puzzle for Leonard to figure out what has happened and why he wasn’t affected. It feels like it would have been an excellent story and an adaptation for Rod Serling’s The Twilight Zone.

I don’t think I’ve read that one, though I’m pretty sure I’ve got a copy of THE SQUARE ROOT OF MAN.

Pretty good day for interesting but not terribly prolific SF writers — besides Tenn, Richard McKenna and Kris Neville were born on May 9.

Does this mean (I hope) that we have many, many more years of Birthday Reviews to look forward to?

Gosh, I missed a lot of pretty significant writers!

But none of them wrote an Ace Double!

When is Kilgore Trout’s birthday?

A case could be made for Kilgore Trout’s birthday being either February 26 or November 11.