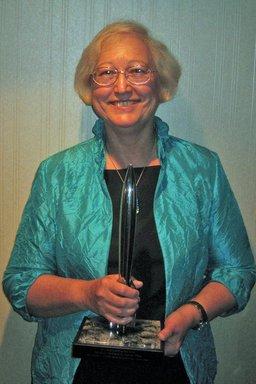 Connie Willis has a long tradition as an MC and presenter at the Hugo Awards. She was asked by Hugo Award MC David Gerrold to present the Campbell Award at this year’s ceremonies, and she publicly declined the invitation on her blog:

You may or may not have heard of the Hugo crisis currently facing the science-fiction community… Basically, what’s happened is that a small group of people led by Vox Day/Theodore Beale and Brad Torgerson took advantage of the fact that only a small percentage of Hugo voters nominate works to hijack the ballot… When I heard about this, I was sick at the thought of what they’d done and at all the damage they’d caused… But I didn’t want to speak out and refuse to be a presenter if there was still a chance to salvage the Hugo Awards ceremony…

But then Vox Day and his followers made it impossible for me to remain silent, keep calm, and carry on. Not content with just using dirty tricks to get on the ballot, they’re now demanding they win, too, or they’ll destroy the Hugos altogether. When a commenter on File 770 suggested people fight back by voting for “No Award,” Vox Day wrote: “If No Award takes a fiction category, you will likely never see another award given in that category again. The sword cuts both ways, Lois. We are prepared for all eventualities.”

I assume that means they intend to use the same bloc-voting technique to block anyone but their nominees from winning in future years. Or, in other words, “If you ever want to see your precious award again, do exactly as I say.” It’s a threat, pure and simple… In my own particular case, I feel I’ve also been ordered to go along with them and act as if this were an ordinary Hugo Awards ceremony. I’ve essentially been told to engage in some light-hearted banter with the nominees, give one of them the award, and by my presence – and my silence – lend cover and credibility to winners who got the award through bullying and extortion.

Well, I won’t do it. I can’t do it. If I did, I’d be collaborating with them in their scheme.

Read our summary of this year’s Hugo mess here, and Connie’s complete statement on the matter here.

Good for her! I wouldn’t want to be involved with this mess either.

A very sad situation. I feel sorry for the innocent people caught in the middle.

[…] Earlier today 11-time Hugo Award winner Connie Willis refused to present the Campbell Award at this year’s ceremonies, saying “If I did, I’d be collaborating with [Vox Day and his followers] in their scheme.” […]

[…] Hugo Award winner and frequent award presenter Connie Willis put it well, I think, when she refused to take part in presenting the Hugo presentation this year, […]