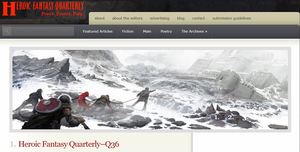 Each month I sit down with the hope of reading nothing but good, solid sword & sorcery fiction. I may read all over the place most of the time, but I do the roundups to get a fix of the stuff that inspired me to blog in the first place. When I open the electronic covers and start reading, I want swords, wizards, warriors, big honking monsters. The basics.

When I finally sat down to read this month’s batch of stories for the roundup, I felt as if I was being deliberately messed with by everyone. There were a few applicable stories, but for the most part, what I read could have been found in the confines of other, less genre-affiliated magazines. It’s not that any of the stories were bad. In fact, they were quite good. They just weren’t heroic fantasy and that’s what I was looking for. Maybe it’s just that I’m getting old and cranky, maybe I’m just a dope, but I was not an especially happy S&S reader this month.

Heroic Fantasy Quarterly, the gold standard by which I judge even the superlative new Tales from the Magician’s Skull, let me down. Issue 36 has the usual complement of three stories and three poems. I don’t dislike any of them, but I only like one of them.

“More Blood Than Bone” by E.K. Wagner is not the one I liked. The issue of who is entitled control of natural resources and who gets to wield the power they confer is couched in a nautical tale starring a sea monster, a naturalist, and a sorcerous aristocrat.

Divided into several sections, each commences with an entry from The Bestiary of Tierence Stillson, Esq.. In the first section, Tierence herself appears on the deck of a ship hunting the dangerous haukfin, in order to gain a better, up-close understanding of the creature and one of its teeth, a source of great magical potential.

This sea-faring creature is of gigantic proportions, easily matching the length and girth of the Ngimbian ships which stalk the haukfin in its lair. Found to live hundreds of miles off-shore any civilized isle, the haukfin inhabits the coldest depths of the water. It rises to the surface only to feed or to hunt the sailors. The jaws of the haukfin unhinge like that of a large snake and it has teeth like razors. Any one of these teeth is the size of a man’s hand—or larger—and many sailors use these teeth, if they are so lucky as to have one, to carve themselves good-luck totems. Fine ladies and gentlemen also collect these carvings to display in their halls and parlors.

Printed in Half-shine Square, at the sign of R. R. Quires

The prose, sentence by sentence, is quite good, and there’s a solid sense of the world and culture, but not of the character. Despite the excerpts, despite her actions in the story, she remained a blank figure, and in the end I felt a little more lectured to than entertained.

Rebecca Brinker’s “Lady and the Dwarf” is a clever reconfiguration of Snow White and the Seven Dwarfs. It explores themes of lust, devotion, and betrayal, at the same time whipping up a backstory for the original fairy tale.

Once, in a forest, there lived not seven but one dwarf. He was a hard industrious man who had an affinity for the earth and a talent for finding ore. It did not matter what kind of ore: copper, silver, gold, the Dwarf could find it all, but lived simply and was content. Until, one day, a woman lost in the forest happened upon his cottage.

It’s written to read like an actual fairy tale, which I liked very much. While there’re some bits more obviously adult-themed than in a typical Brothers Grimm story, it still has the voice and stylistic flourishes of one of them. It’s a thoughtful story, but it is most definitely not heroic fantasy.

“Canvas Tears” by Steve Rodgers is the story I liked, both on its own and as heroic fantasy — even though it’s not really heroic fantasy. Years prior, three soldiers made themselves great powers using a magical substance called rainpaste, and came to be known as the Renegade Three. The rainpaste also drove them mad. Fearing their fellow soldiers would steal the substance, they killed them all. Their insanity also led to the absolute destruction of the kingdom of Bentara. Eventually, they were driven from power. Since then, two were killed. Now one, Sparhall, remains, and two of his victims have come to the town he’s hiding in with a daring plan to expose and kill him.

The writing is solid, if not as good as in the other two tales. What elevates it above both of them is the character of Amis and the weight of the history that drives him. Rodgers imbues them with credible emotional substance and in turn the story has some actual heft. While it feels like it is part of a bigger tale, it manages to stand well on its own, something I do prefer a short story to achieve.

The poetry is the poetry. From the very beginning I have considered myself a poor judge of it, and that opinion still stands. Nonetheless, try, I must.

Gary Every’s “The Great Bear God” fills us in on what ancient secret lies under the soil of modern Russia. Mostly I liked it, but a few lines felt too modern, and jostled the poem in a way I found disruptive.

“Chase of the Blue” by S.K. Naus inverts a standard fantasy trope: the princess rescued by a prince. A mighty woman warrior, Majesta, rescues a prince, Joplin, from a wizard’s dungeon. Nothing in it spoke to me.

In the final poem, “What You’ve Become” by Gretchen Tessmer, it seems as if the unnamed subject of the narrator’s words is a someone who has changed over the years into something dark and awful. There’s too much information and not enough emotion. Until the last line, which I found potent, I was unmoved by this poem as well.

Swords and Sorcery Magazine has always been a hit-or-miss affair, and this month’s issue, #75, is a perfect example. One story is meh and the other very good — or at least, I enjoyed it a lot.

In “Enough to Matter” by Jamie Lackey, beauty, as in our world, is a marketable commodity. Unlike ours, it is transferable. Lilybet gives her slight, almost unnoticeable amount of beauty to her already attractive sister, Kiahna, to make her more desirable. It’s an interesting take on sisterly devotion and finding one’s own path, but there are no swords and the sorcery feels more psychological than mystical.

“The Penitent” by Harry Piper has few real surprises (and one great one I should have seen coming, but Piper’s bit of misdirection was so direct it misdirected me. Kudos to you, sir!), but it’s a good story. The heroes, brothers Llew and Rhodri, are swords-for-hire who have just arrived in a nameless walled town on the outskirts of a land ravaged during a past war against a necromancer.

They hire on to escort a monk into the danger zone. He’s had visions of someone in need of penance still living out there and the local bishop has decided he needs protection. For a larger sum of money than they’re used to, the brothers take the contract.

There are some great moments in Piper’s story, particularly one involving the unwanted attention of a small horde of the animate dead. Based on that scene alone, Piper, who has never been published before, is a writer I’ll be keeping an eye open for.

That’s a wrap for this month. Maybe there’ll be more real sword & sorcery next time out. One can hope. Still, both these magazines are free and “Canvas Tears” and “The Penitent” are both more than worth the little bit of your life they require to read. So go read ’em.

Next week I’ll be starting my reread of Glen Cook’s Black Company series. I’ll read the original three books — The Black Company, Shadows Linger, and The White Rose — plus The Silver Spike, all in a row, then continue on with the rest later in the summer. If you haven’t read them already, I recommend giving them a shot now and following along with me.

Thanks for the review of HFQ #36. Glad that you liked the writing, but I’m a little sorry that the stories didn’t speak to you more!