I inhaled deeply, my phantom nostrils flaring in pleasure as a pungent blend of brimstone and exhaust fumes filled my nonexistent lungs. Home — the perfect place for me, Daemon Grim, the Reaper, Satan’s personal enforcer. This was my kind of place, and I loved it here. But I suppose that was understandable, as I was top of the food chain.

According to Wikipedia, “Bangsian fantasy is a fantasy genre which concerns the use of famous literary or historical individuals and their interactions in the afterlife. It is named for John Kendrick Bangs who often wrote it.” And that is what the Heroes in Hell series is all about.  Now, while the identity of Andrew Weston’s character, Daemon Grim, remains a mystery, that’s all part of the fun: who was Grim in life? What famous or infamous person from earth’s history was he, and how did he become Satan’s personal enforcer?

Hell is, as Weston states in his dedication, “the best playground — ever!” And that’s true indeed, for writers, and for us readers. This is Weston’s second novel in Janet Morris’ Heroes in Hell Universe, following closely on the heels of his Hell Bound, published in 2015, which I also reviewed for Black Gate. This second novel from this best-selling author is a real mind-blowing trip through the dark, dangerous and various levels of the infernal Afterlife.

The plot has enough twists and turns to make a roller coaster jealous as a psychopathic angel and fugitive from injustice named Grislington (now known to a select few as Angelus Giseldone) causes a hell of a ruckus when he escapes from his prison in the Black Keep. Grislington’s flight from the Keep involves the loss of the Sword of Celestial Arches, a relic missing since the time of his escape. The sword was given to him by He Who Cannot Be Named: in other words, God. But this is no ordinary sword: it’s a mighty talisman which can open a portal to nearly any location in manifold levels of reality. Daemon Grim and his cadre of Hell Hounds are assigned the task of finding the sword before it falls into the wrong hands. And if this deranged angel Grislington has it or knows where it is, there’s no telling what havoc he might cause, should he choose to go on a rampage.

Meanwhile, the unlikely duo of Frederic Chopin and Nikola Tesla attempt to orchestrate the Reaper’s doom. These two are also on the hunt for Grislington’s more-than-magical sword, while Thomas Edison works on ideas stolen from Tesla. This has one upside: Tesla has been spared the painful punishment he’d suffer if he had managed to build on his designs. Not so for poor Chopin, whose fingers break every time he starts playing the piano. Now they’re hiding from Grim and his Hounds: Nimrod the Biblical king; Charlotte Corday, the angel of the assassination who murdered Jean-Paul Marat, a key figure in the French Revolution; and Yamato Takeru, a ninjutsu master. Reliable intelligence from the Devil’s Children suggest that they had amassed an unspecified number of multi-phasic rift generators, also known as “teleport orbs,” sophisticated devices that can open an entrance to any level of hell. What with Erra, the Babylonia God of Plague and Pestilence, and his Seven Sibitti warriors still running rampant, messing with sheolspace and changing the landscape of Infernity that started in last year’s edition of Heroes in Hell — Pirates in Hell — the Hell Hounds, have enough to keep them busy for eternity. Throw in a huge and wonderful cast of characters that includes Doctor Livingston, Queen Isabella, and Marie Tussaud, who’s known as Madame Two-Swords, and Hell becomes even more of a madhouse than it already is.

Chopin and Tesla are playing a clever little game with Grim, leaving notes at the scenes of their crimes to tease and aggravate him. And this is part of the fun of Hell Hounds, a novel filled with horror and action and character drama, and not without a great sense of humor and a wealth of puns and word-plays. Hell is certainly a madhouse, so imagine yourself as an inmate in one of Hell’s most notorious madhouses, and you’ll get some idea of what Grim and his Hell Hounds are up against, and what you’ll encounter between the covers of this devilishly clever novel. 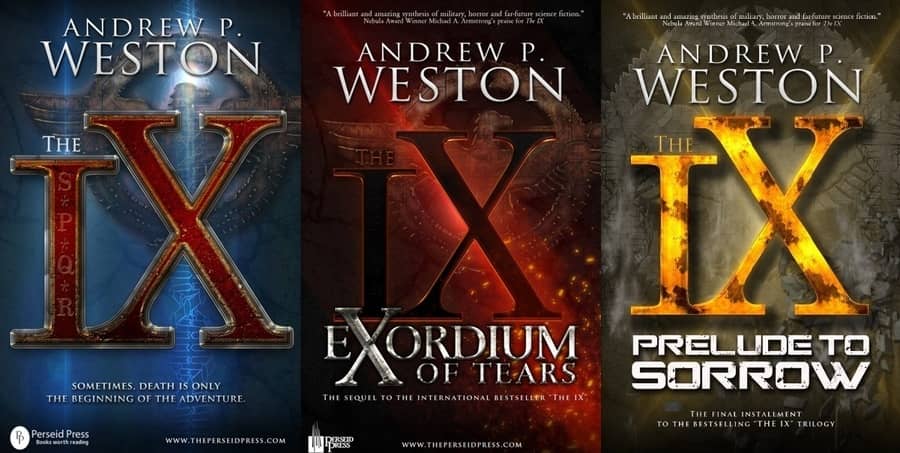 Grim himself is a likable enough chap, a character we can relate to. For all his power and the dangerous weapons at his disposal, he is one of the most polite, well-mannered and well-spoken Hellion assassins you’re likely to meet anywhere in Hell. Armed with a combination of hellish magic and infernal science, he can also speak telepathically with his team mates, the Hell Hounds. He’s dogged and relentless, and yet not invulnerable. For all the times he emerges from a fight with nary a scratch, he often ends up getting knocked around. This adds nicely to the film noir ambience of the story. Grim is very much cut from the same cloth as Sam Spade, Philip Marlowe, Mike Hammer and James Bond. In one early scene, Daemon Grim even gives us a bit of a description of himself:

Last time out, I had allowed myself to become distracted and had ended up chasing my own tail, I had been screwed — twice — and members of my own personal retinue captured and hurt. His Infernal Majesty had seen fit to empathize by augmenting my powers far beyond what they were, but at the same time he had blocked my ability to return to corporeal form. That’s why Satan’s Reaper now had to slink around everywhere without a face and encased within a living suit of palladinium armor. I might possess a huge pair of golden balls in sight of all and sundry, but I wasn’t exempt from the satanic consequences of failure.

As for his specialized team, his Hell Hounds, they’re sidekicks right out of an old war movie. They remind me of Nick Fury’s Howling Commandos, and Sergeant Rock’s Easy Company. They’re a fun lot, each very much his and her own character; their sense of humor and the way they interact with one another adds a level of gritty realism to the story. And they get the job done, too. You don’t want to mess with this wild bunch. What they come up against, who they must tangle with, and how they manage to do it is one of the joys of this novel.

Hell Hounds is a well thought out and intricately plotted story with so much going on, so many interesting characters, concepts and ideas that this review would be novel-length if I described it all to you. But then, Weston has already done that is this wonderful novel that crosses genres more often than that infamous chicken crossed the road. Horror, heroic fantasy, swords and sorcery, mystery, hard-boiled crime, science fiction… you’ll find all of these and more in Hell Hounds, a novel that can be enjoyed on its own, or in the greater context of the Heroes in Hell Universe. Weston delivers on this one with all the power of a brimstone-fueled pitchfork!

Joe Bonadonna’s last article for Black Gate was his review of Errol Flynn: The Life and Career, by Thomas McNulty.

We loved Joe Boadonna’s defining review of Hell Hounds. Joe connects Hell Hounds to its roots in multifarious facets of literature and history. We’re delighted to say there’ll be another Andrew P. Weston Hell novel, after the forthcoming Lovers in Hell and including a taste of Hell’s Gate. Until then, keep your pitchfork hot lest the Sibitti take you.

Thank you, Sacred Bander. Always a most excellent pleasure to read and review a Hell novel.

Thank you Black Gate & Joe Bonadonna for the ‘glowing coals’ review – much appreciated.