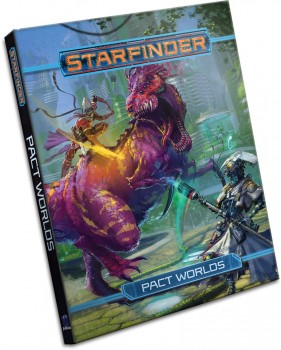 The Starfinder RPG allows for literally a universe full of original settings, giving Gamemasters the opportunity to create their own worlds and societies as the basis for their games. For those who like working with a framework of existing source material, though, the Starfinder development team has done a great job of presenting exactly the sort of rich, diverse system of planets, races, and societies that one could hope to find: the Pact Worlds.

Starfinder is set in the distant future of their Pathfinder RPG fantasy setting, after the dominance of magic and superstition has given way to science and technology (and, of course, technomagic). The planet of Golarion, the center of the Pathfinder fantasy setting, has vanished. In its place rests the massive Absalom Station, surrounded by the remaining planets of its solar system. No one knows what happened to Golarion or who built Absalom Station, due to a break in history known as the Gap.

The planets of the system have joined together with Absalom Station to form the Pact Worlds, a loose defensive alliance formed against external threats. These fourteen locations (not all are planets, as they include the Sun and an asteroid belt) get a couple of half-pages apiece in the Starfinder Core Rulebook, but the newly-released Starfinder Pact Worlds sourcebook (Amazon, Paizo) fleshes them out and provides a variety of related starship and player options for Starfinder characters. Both players and Gamemasters will find much to love about this newest installment in unfolding universe of Starfinder.

In the first chapter, “The Worlds,” each section provides not only a map or diagram of the world in question, but descriptions of the key locations within each world, and a new character theme related to the world, such as the Solar Disciple, the Tempered Pilgrim, and the Space Pirate. The section on the robot-populated world of Aballon describes 21 different locations, like the ancient city of Infinity, the 01 space station, and the megaplex forge Automatrix, and introduces the Roboticist theme for characters. Meanwhile, the gas giant of Bretheda has another 21 locations described, the Byssine Run within the swirling gas of the world, a variety of academic and research institutions, and the settlements on the various moons that circle the planet, before offering the Biotechnician theme.

Chapter Two is “Starships,” and introduces more options for players into incorporate into their party’s starship. First, there’s some elaboration on how The Drift – Starfinder‘s version of hyperspace – works to get ships traveling from planet to planet and star system to star system. Then the chapter details a number of new systems and expansion bays, such as a Brig or a Hydroponic Garden, that can be added to starships using the creation rules outlined in the Core Rulebook. Finally, there are three ships detailed that are related to factions presented within the book, such as the Aballonian robot-controlled ships and the druidic Xenowarden living starships. These 15 starships, ranging from tiny racers to gargantuan carrier battleships, provide a lot of variety to supplement the original set of ships already available.

The “Supporting Cast” chapter offers some staple character templates, such as cultists, street gang members, Hellknights, and security forces. There are a total of 18 character stat blocks included in this chapter, as well as some additional information to help create NPCs for various factions. 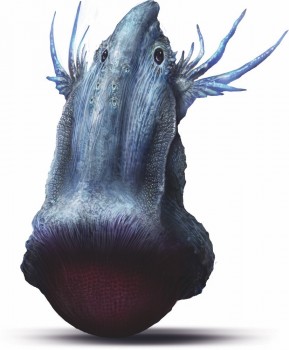 For players instead of GMs, the final chapter of “Player Options” will be of particular interest. It includes 6 new archetypes, including those for Star Knights of various types, a Divine Champion, and a Starfinder Data Jockey. Players looking for new feats, spells, and equipment will also find ample new options available. There are also 6 new races detailed, with the winged Strix and the exotic Bantrids (shown to the right) among the options. There is a near-undead race called the Borais that still has its soul and maintains a trait based on the race it originated as and SROs (“sentient robotic organisms”) are a nice choice for those who want to play robots with souls instead of the Androids outlined in the main book.

The setting and related information presented in Pact Worlds covers a broad range, though it doesn’t go into as much depth as the material presented in the Dead Suns Adventure Path. Those running or playing the game will definitely want access to the options presented.

The only thing I was hoping for, but found missing, was that the equipment section didn’t include any new vehicles. (I hope to find this included in the upcoming Starfinder Armory) Also, for those who play in the Starfinder Society organized play, since the Additional Resources document hasn’t been updated yet as of this writing, it’s unclear which of these options will be legal for use in the Starfinder Society games.

Disclaimer: A complimentary copy of Pact Worlds was provided to the author for review purposes.