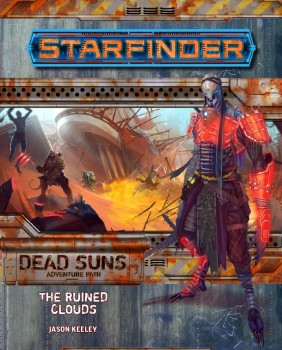 Last fall, the game publisher Paizo began releasing their line of Starfinder products, taking their Pathfinder setting into a distant science fantasy RPG setting. In addition to the main Starfinder Core Rulebook (Amazon, Paizo), they also began releasing the Dead Suns Adventure Path. With four of the six Dead Suns books now out, it’s about time to look back on what they’ve released to see what all the series has got to offer for fans looking for material.

Paizo’s Pathfinder Adventure Path books have long been a staple of the company’s product line. It provides a broad campaign of adventures across six 92-page books, each released on a monthly schedule. In addition to the adventure, each book contained setting, culture, and religious information, a Bestiary supplement, and original fiction.

Dead Suns continues that tradition in their Starfinder campaign setting, with the only significant difference in format being that these books are released on a bi-monthly schedule, so it takes a year to release the full Adventure Path as opposed to the two Adventure Path schedule for Pathfinder. Starfinder is on a less aggressive production schedule than Pathfinder, without associated Player Companion or Campaign Setting resources released monthly, so the Adventure Path provide supplements to the two hardcover Starfinder supplements slated for release each year. (The Alien Archive was released in the fall, and the Pact Worlds setting book is slated for release this month.)

As the first Starfinder Adventure Path, Dead Suns is a planet-hopping quest through the Pact Worlds, as the players get their own starship and begin following the clues across planets, running afoul of massive corporations, space monsters, undead starships and necrotech, and the troublesome Cult of the Devourer, as they uncover the secret behind a lost superweapon.

Even if you don’t go through and run the adventures exactly as written, there’s ample plot and setting material to give a Gamemaster plenty to lean on as they develop their own adventure. Personally, the one thing I’d like to see is some Starfinder fiction, because the world is so rich and involved I find myself lamenting the lack of a Starfinder line of novels. At present, though, Dead Suns doesn’t include chapters of fiction.

Here’s a breakdown of the information available in the books:

Incident at Absalom Station (Book 1 of 6)

The final two books, releasing in April and June of 2018 respectively, will reveal more advanced technology from a lost alien civilization, a variety of new species, deck plans and details on a Devourer starship … and, of course, the conclusion of the Dead Suns campaign. You can pre-order through the Paizo website, including with a subscription that gets you the hardcover book and the free PDF as soon as they are available.

The Adventure Path is also fully compatible with the Starfinder Society Organized Play … but more details on that will have to wait for a future article.

More on Starfinder (and Related Articles)