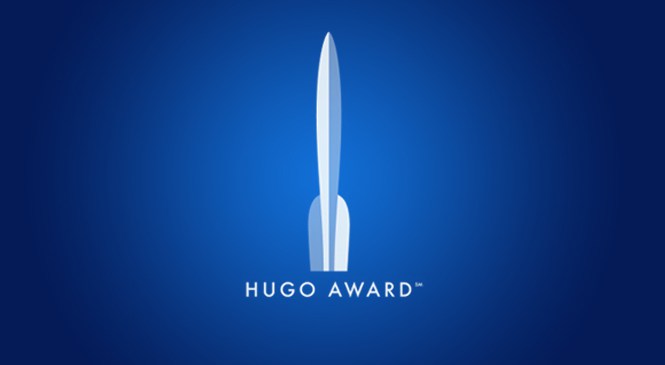 Holy neutron stars, it’s the end of March, and you know what that means…. it’s time to announce the finalists for the 2018 Hugo Awards! Doubtless most of you paid close attention to Rich Horton’s suggestions for the best science fiction and fantasy of last year, did a lot of heavy reading over the last four weeks, and thoughtfully cast your nominating ballots. Or maybe not.

But either way, it’s time to see who all your fellow voters nominated. Ready? Here we go.

The Books of the Raksura, by Martha Wells (Night Shade)
The Divine Cities, by Robert Jackson Bennett (Broadway)
InCryptid, by Seanan McGuire (DAW)
The Memoirs of Lady Trent, by Marie Brennan (Tor)
The Stormlight Archive, by Brandon Sanderson (Tor)
World of the Five Gods, by Lois McMaster Bujold (Harper Voyager)

This year Worldcon will also be awarding the 1943 Retrospective Hugo Awards, celebrating the best science fiction published 75 years ago, before the Hugo Awards existed.

The finalists for the 1943 Retrospective Hugo Awards are:

No savage ideological brawls? No crippling controversy? Just folks deciding what stories they think are most deserving?

Whatever is the world coming to?

My reading list for the summer just got a lot longer, but I’m looking forward to almost all of it.

> Whatever is the world coming to?

As expected, the “E Pluribus Hugo” amendment to the voting process seems to have effectively neutralized the slating process that the Rapid Puppies used to highjack the Hugo ballot for the last few years. Good riddance.