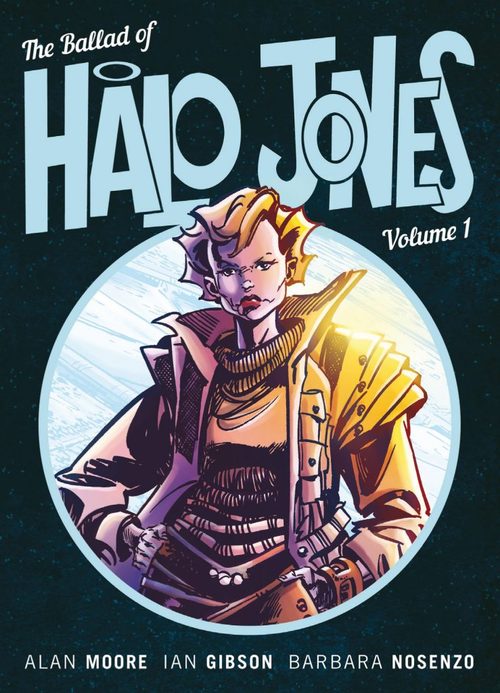 Talk long enough with people about the British comic publisher 2000AD and you’ll eventually get into a conversation about where The Ballad of Halo Jones fits in the ranking of Alan Moore’s work. A few people have said that Halo Jones is Alan Moore’s greatest work, and it is frequently called Moore’s unknown classic. 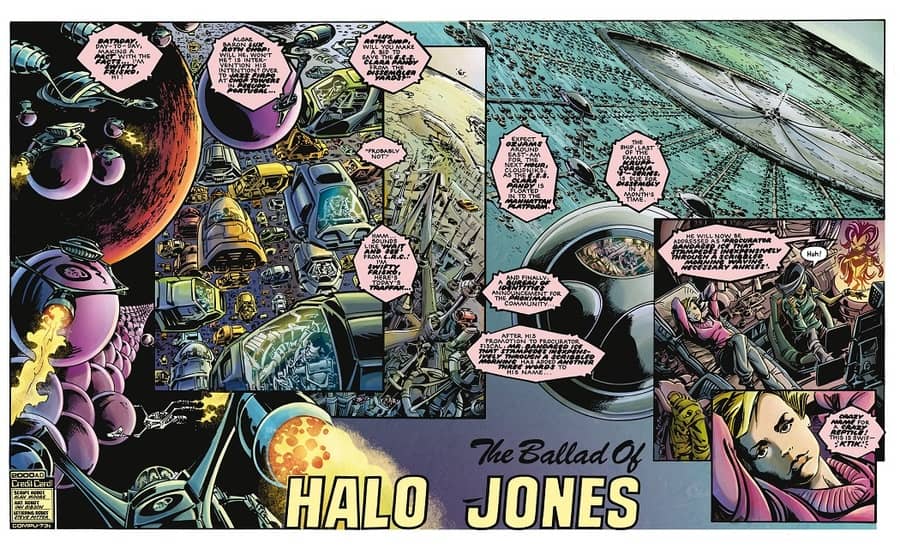 In 1984, while Alan Moore was already writing his famous Swamp Thing run, he teamed up with artist Ian Gibson in The Ballad of Halo Jones, the story of a teenage girl living in a poor floating hoop city with no possibility of a prosperous future, and quite probably a short life, due to the violence and crime and poverty where she lives. 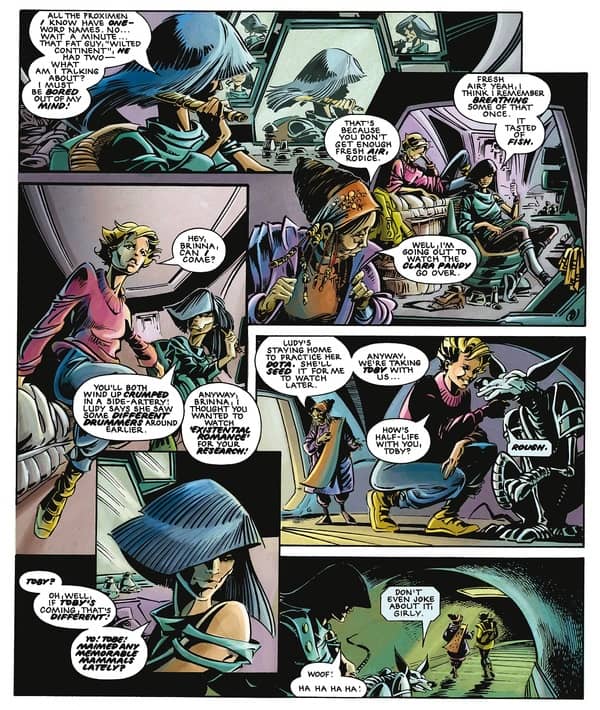 Alan Moore and Ian Gibson did the equivalent of three black and white graphic novels worth of The Ballad of Halo Jones over the next few years. The story is told in 5- and 6-page installments, as is typical of the story-telling in the weekly publication schedule of 2000AD. This type of highly serialized story-telling is fascinating to read, as it requires a dense style bereft of wasted story beat and despite this, each mini-chapter, complete with inciting incident and three acts, reads really briskly. 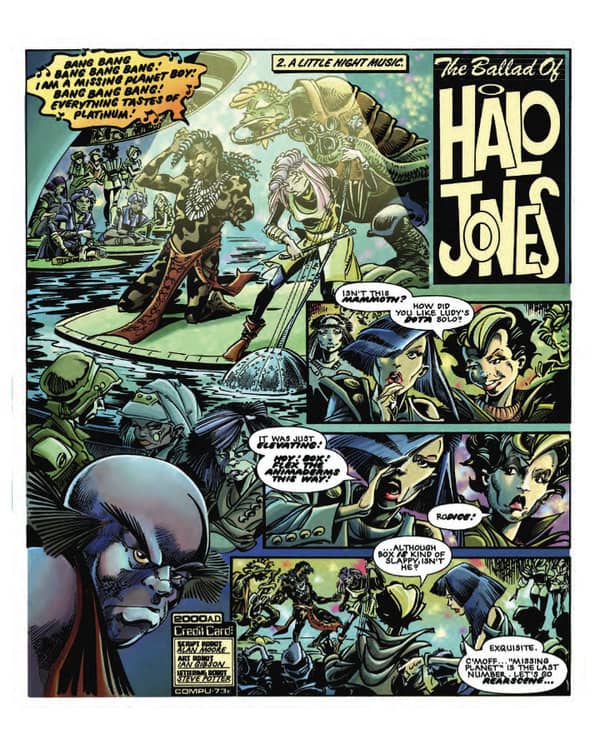 I’d never read any Halo Jones but 2000AD is launching a new colored version in May, 2018 and I managed to get my hands on an advanced review copy. What did I think?

I’ve read Moore’s Futureshocks for 2000AD, his Watchmen obviously, his League of Extraordinary Gentlemen, and his Cthulhu-based horror works Neonomicon and Providence, both from Avatar.

Halo Jones is very different from the other work I’ve read by Moore. Despite the space station scifi of Halo Jones, the story is not concerned with the space station per se, nor with transforming a stale genre or series (like in Watchmen or Swamp Thing), or about the violence or action. 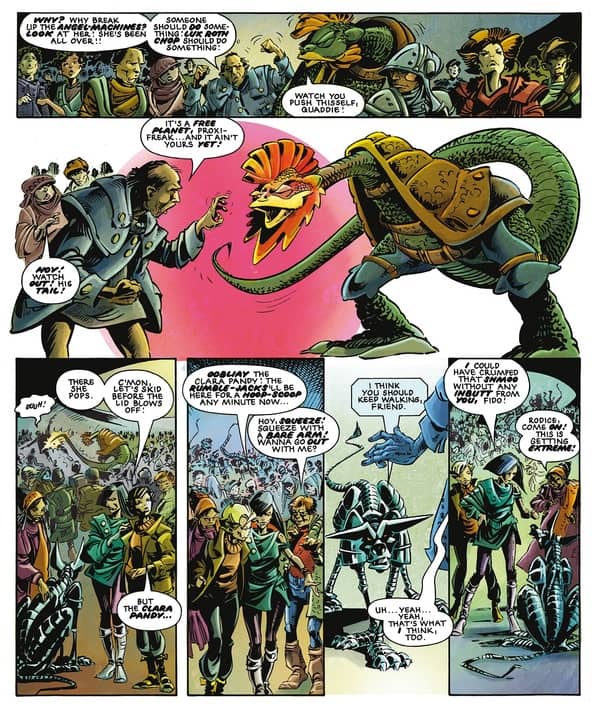 It’s a story about being a teenager and having not a lot of hope. It’s a story about trying to get along. Halo and her friends watch TV. Around the danger of crime, they go out to a club, and they try to get groceries, which is a 2-day trip. The circumstances are weird, but Halo is eminently relatable as a person because her wants are so earthy and so much part of the teenage experience. 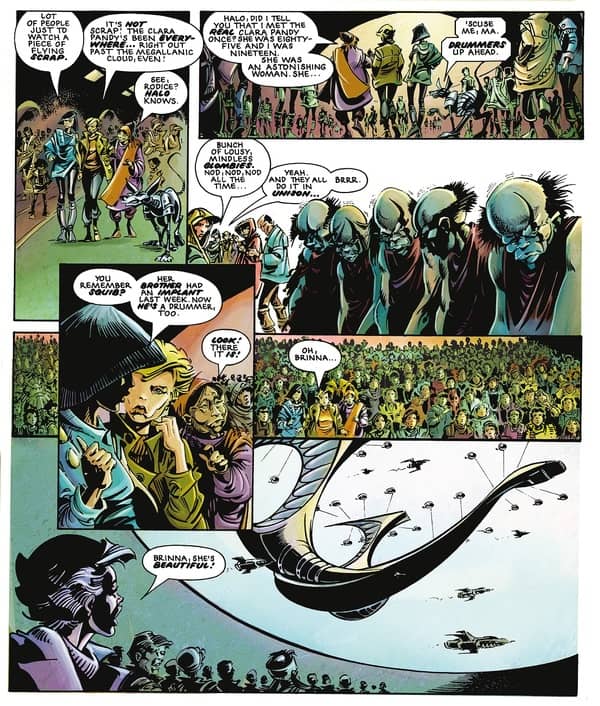 It isn’t a spoiler to say that Volume 1 is about making the choice to leave the Hoop, in part because the decision is not the focus of the story; the journey is.

I got to experience Halo Jones in color for my first read, and Barbara Nosenzo’s work in bringing vibrancy to the dense, claustrophobic, chaotic world of the Hoop makes it a much easier and more visceral read. I put some uncolored and colored pages side by side below to show the difference.

Ian Gibson’s art is highly stylized, with proportions and postures far more likely to take on angles to evoke the emotion of the scenes than to conform to anatomy. Likewise, the inorganic world, which we’d assume would be straight-lined, is instead round, round in the corridors, round in the subway tunnels and doorways, and even the space-ship that helps crystallize Halo’s decision to run looks far more like a swan than a rocket.

I really enjoyed the reading experience of The Ballad of Halo Jones, Volume 1, and as a writer, I’ll be rereading for certain. This trade will be out in mid-May if you want to pick it up!

Derek Künsken writes science fiction and fantasy in Gatineau, Québec. The second installment of his novel The Quantum Magician is on the stands now in the Mar/Apr 2018 issue of Analog Science Fiction and Fact Magazine. He tweets from @derekkunsken.

Wow, another Alan Moore comic to read! And newly colorized, too, which just adds so much depth to the scenes that you displayed, Mr. Kunsken. Beautiful work, all around. Thank you for the heads-up!

When it comes to Halo Jones the story has a special place in my heart. I read the story while still in high school back in the ’80s. Possibly my favourite comic of all time. One thing I was frustrated with when I was young was that it is finite. The story ends and there is no follow on. But that in retrospect and with the wisdom that (supposedly) comes with age is what makes the story so powerful. It hasn’t been watered down, messed about, rebooted, re-imaged (well until now I suppose if one considers the colour) etc.

It is a fantastic and in many ways inspirational story. A must read! Thanks for advising of the colour version. It will be interesting to see how the scenes were interpreted.

I read the series as it came out and its one of Mr. Moore’s finest. Originally he intended an additional series arc for the character but had a falling out with 2000 AD and quit writing for them I do not know the precise troubles. The artise IanGibson has passed away so a story that live on in the might have been never never land. Which brings me to the question. Do authors have an obligation or a better word responsibility to their readers to complete their stories. In my heart of hearts I believe the author can quit when they choose but–this little voice inside goes hey they started it and I went along for the ride I want to finish it. Come to think of it this also happened with Marvelman for Warrior magazine. Not to be judgmental but—sigh.

Hey Tony! So many people told me the same, and having been a pretty plain Marvel/DC reader as a kid (not even Vertigo), there are a lot of classics I’m catching up on.

Hi Allard! Yeah – the reason Moore and Gibson never finished Halo Jones was because of the rights disputes. At that time, 2000AD (I think still owned by Fleetway) had contracts that were very unfriendly to creators. Basically, creators were paid below Marvel/DC rates, created the stuff (ie: they invented the IP) and Fleetway owned everything and paid no royalties to creators on collected editions, reissues etc. That’s partly what made it so easy for Karen Berger in the 1980s to scoop up so much British talent for the 2nd tier DC books which were then transformed by the British aesthetic (Animal Man, Swamp Thing, etc). 2000AD has changed ownership a couple of times and now I believe that the terms are now better for creators, but I doubt that will ever get us the 4th volume of Halo Jones. A lot of this was in the 40-year 2000AD history called Thrill-Power Overload that came out in Feb 2017. Great read!

Appreciate your comments Derek. I have the Thrill Power Overload book but have skimming it-saving it for a rainy day. If I may suggest some ‘classics comics reading wise in no particular order: Don McGregor’s Black Panther run in Jungle action and Chris Priest’s run on the Panther in his own title; McGregor again with his Killraven, War of the Worlds from Amazing Adventures; Steve Gerber’s Man-Thing; Doug Moench (with artist Paul Gulacy) on Master of Kung Fu; Steve Englehart’s Doctor Strange run and his Batman run from Detective Comics; John Ostander’s Grimjack and Xenozoic Tales–just for starters. As 2000 AD I find it best to read series in a group–JUdge Dredd reads easier that way. Have a fondness for Strontium Dog and Rogue Trooper and have never made it rhru an ace Trucking story 🙂

I was not aware they planned another Halo Jones book. Thanks for the tip on Thrill Power Overload, will need to get that.

Slight (related) tangent. Having picked up the hard cover re issues of Charley’s War and read through his commentary in each, seems rights and recognition were a major issue in British comics generally. Pity, wonders what could have been otherwise…

A small clarification. hen Halo Jones first came out Moore did the two main story arcs and ws palnning on another one moving her long in age but then he had his falling out. The reprints are usually two volumes but I have the original issues of 2000 AD having started early and getting them as often as I can except that incredible time Diamond Distribution quit carrying them and caused a huge gap in my collection. I am rather proud of my collections such as they are.