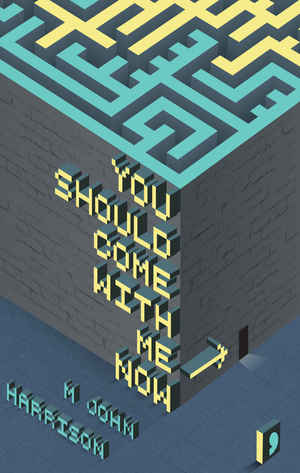 Unfortunately the bulk of it, including The Centauri Device (1974) and his individual Viriconium novels, is not an easy find, especially if you haven’t been collecting paperbacks for decades. I’m frequently asked by frustrated readers how to start with M. John Harrison, so I’ve very pleased to see a brand new collection scheduled for next month. You Should Come With Me Now arrives in trade paperback on March 1st.

M. John Harrison is a cartographer of the liminal. His work sits at the boundaries between genres – horror and science fiction, fantasy and travel writing – just as his characters occupy the no man’s land between the spatial and the spiritual. Here, in his first collection of short fiction for over 15 years, we see the master of the New Wave present unsettling visions of contemporary urban Britain, as well as supernatural parodies of the wider, political landscape. From gelatinous aliens taking over the world’s financial capitals, to the middle-aged man escaping the pressures of fatherhood by going missing in his own house… these are weird stories for weird times.

You Should Come With Me Now will be published by Comma Press on March 1, 2018. It is 272 pages, priced at $14.95 in trade paperback and $9.99 for the digital edition. Get complete details at the Comma Press website.

Based on the praise and recommendation here, I’ve added it to my Amazon queue for pre-order!

Amazon just dropped the price by $5, to $9.77, this morning. Not sure how long that price will last, so take advantage of it!