Other Worlds Science Fiction launched in November 1949, part of the boom in f&sf magazines in a postwar world that retroactively realized their worth after real life rockets and atomic bombs made headlines. It was frankly third-tier, half written by Rog Phillips under pseudonyms and half by younger writers striving to make their mark. After a year or two, though, some bigger names like Ray Bradbury, A. E. van Vogt, and Robert Bloch were lured in and a few of the newcomers would develop into stars of equal rank. Even so, fans read it for fun and excitement, not literary quality. Issue after issue sated with a plenitude of humor stories, starting with the Hoka series by young Poul Anderson and Gordon R. Dickson, and robot stories, including ones by Bradbury, van Vogt, and Bloch, and humorous robot stories, many by authors nobody remembers (such as Hodge Winsell, whose two atrocities comprise his entire f&sf oeuvre).

One reason for the increase in quality was hidden from readers. The editor for the first issue was listed as Robert N. Webster, another pseudonym. Knowledgeable fans would have been tipped off by the presence of “The Fall of Lemuria” by Richard S. Shaver, a true screwball who might have believed in his stories about an alien civilization hidden within the Earth. Ray Palmer had pushed circulation at Amazing Stories to the  f&sf magazine peak with Shaver until his bosses grew tired of the slime on their fingers. Sure enough, Robert N. Webster was Ray Palmer and Other Worlds was headed down that same path.

And then the horribly unlucky Palmer, who grew up hunched and dwarfed after a car accident when he was seven, slipped, fell, and became temporarily paralyzed from the waist down. A 21-year-old fan, Bea Mahaffey, who was already on the payroll as Managing Editor, i.e. editor of scutwork, quietly took over, adding Marge Budwig Saunder to replace her hands-on jobs. Today it’s given that the sudden veer away from Shaver and toward solid second-tier status is attributable to Mahaffey. 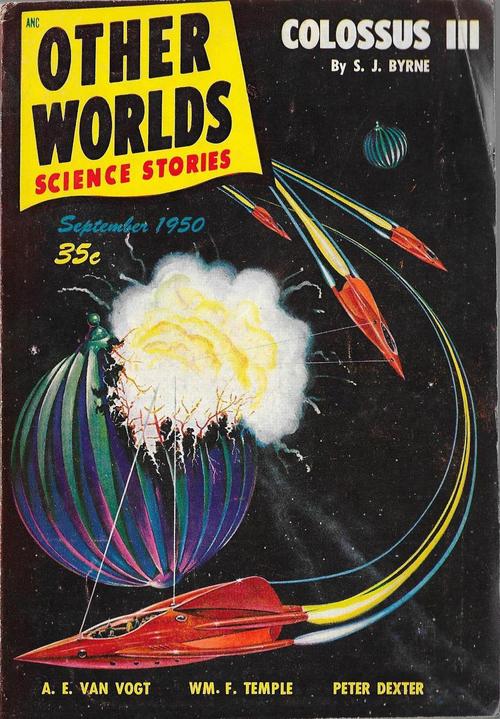 That leads me to E. Everett Evans, part of the f&sf fan community from the earliest days, and yet just beginning to write professionally when Other Worlds began. (The E. Everett Evans Big Heart Award was given out as a sort of lifetime achievement recognition to aging fans at every Worldcon Hugo ceremony from 1959 to 2005, although it was renamed for Forrest Ackerman in 2006. When even fans think your name comes from an era too far in the past, the world has moved on.)

Evans wrote three stories for Other Worlds, “Little Miss Ignorance” (September 1950), “Little Miss Martian” (May 1951), and “Little Miss Boss” (August 1952), as obviously connected as their titles indicate. The stories are set on Mars while it is being terraformed. Patterned on frontier towns in the Old West, getting to Mars takes time and effort and so whenever the company that runs the works sends up a ship, people mosey down to Terramars Field to see the new faces emerge from the rocket. (Only a very mean critic would ask why a giant corporation would send workers to Mars without bothering to give them a job assignment.) As it happens, Jimmy Foxe doesn’t care at all what one stunningly lovely newcomer does. “’Wheooo!’ he whistled. Earth was certainly making them more beautiful every year.” By a remarkable coincidence she’s a speed typist, which is exactly the job he needs. (He hires her without bothering to ask her name, which is Barbara Greenwood.) 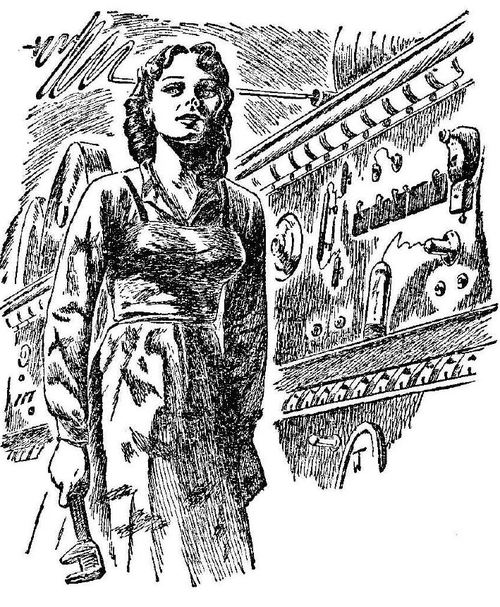 Barbara is Mars’ best typist. She’s also a social innocent, hence the “Little Miss Ignorance” title. She doesn’t know what music is, doesn’t know how to respond to brassy blonde Betty Bowser’s warning to keep her paws off Jimmy, and oddest of all doesn’t know what Jimmy is doing when he kisses her. Her training, she says in a vast understatement, has been incomplete. The twist in this otherwise proto-Mad Men era atmosphere is that Barbara’s technical training is superb. When the electronic calculator’s Selectron fails and the company can’t send up a Techie for two months, Jimmy is sure to punt his contract until Barbara begs for a chance to take a crack at the repair. She studies the manual, the blueprints, and a bit of tensor calculus on the side, and within days has it up and running again.

Jimmy is so deliriously happy that he asks her to marry him. She’s mortified. “I can’t marry you! Don’t you know I’m only a robot? I’m not a human being at all.” Little Miss Ignorance has one more blind spot to lift. Jimmy’s an “android robot” too! Everybody on Mars is! No human could live there during terraforming. And oh, the fun he’ll have teaching her “what any android should have known the day she came off the assembly line.”

Punchline stories (see Hodge Winsell) were a blight on Other Worlds. Reader reaction was mixed. One raved that it was “tops,” one called it “not bad,” and a third, a woman, correctly described it as “a series of incidents, not a story” and rated the “complete dud” as the worst story in the issue. (Humor was not her bete noire; she gave first place to Charles Tanner’s “Mr. Garfinkel and the Lepra-Cohen.”) Reader response was less important than filling pages. Evans could write in the breezy style then in vogue and his series of incidents moved the reader along far better than many more plot-laden tales. Mahaffey had already purchased a sequel. Here’s where things get interesting. 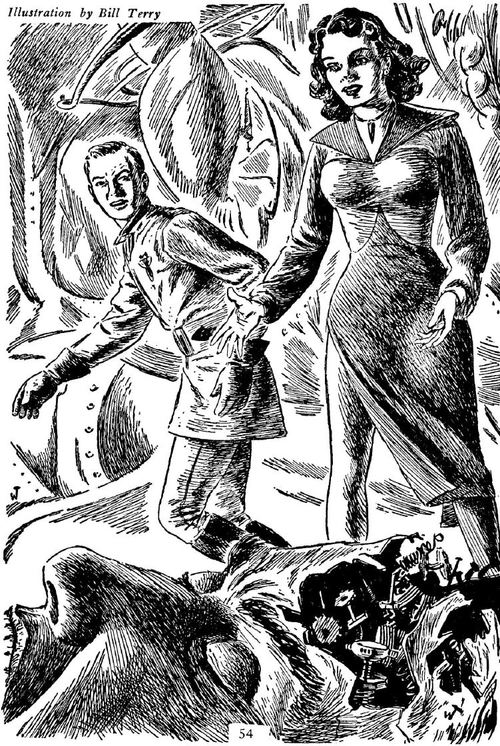 In “Little Miss Martian,” Evans “Mary Sues” the hell out of Barbara (now Barbara Greenwood Foxe – yes, even robots take their husbands’ names, though a grouchy critic might again wonder why androids would enter into marriage, what its legal status might be,  and who would perform the ceremony), making her an omnicompetent genius even a Heinlein character might envy. She can bring dead robots back to life, improve their brains, and hypnotize them through sheer will. And, just as in Heinlein’s then recent novel Red Planet, advanced if age-old Martian machinery that no one can understand is introduced. Barbara does, with a stunning breakthrough: they run on “silicon-based sand!” Generating unlimited energy, with anti-gravity as a lagniappe, the machines will make meeting the contract deadlines a breeze. Nothing can stop them now. 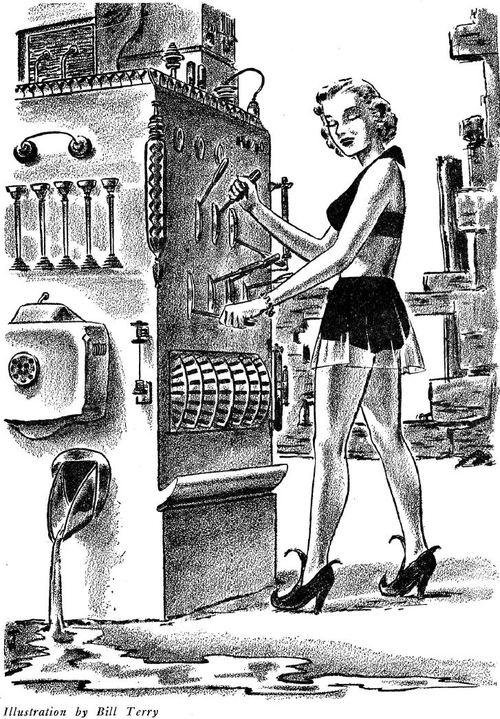 Except a writer needing another sequel. In “Little Miss Boss,” a new batch of androids walk off the spaceship and refuse to work. One asks, reasonably enough, why they should terraform a planet for humans since that doesn’t benefit them? Why should they work for humans at all? “We are the mightier race! We have the greater powers, the better brains! It is therefore right and just that we should rule, and those lesser humans serve us!” [italics in original] One even tries to strike Barbara in defiance of their Asimovian programming “to serve humans selflessly, and to harm no one either directly or by refusal to give aid where needed or desired.” All Barbara’s new abilities in the last story are set-ups for this one. She hypnotizes the robot to calm him and operates on his brain to find that his programming has been inserted backwards, making him angry. An easy fix for her.

Small beans. It’s now time for Barbara to literally save the planet, a commonplace for male heroes but an eye-blinking rarity for females in Golden Age f&sf. Officials on Terra also discovered the traitor androids and now want to obliterate them all, including the ones on Mars. (Who will terraform the planet then? Quiet.) Barbara uses the Martian machines and some new math she pulls out of a spare synapse to create a magic forcefield around the planet, one that the Terran battlecruisers literally bounce off of. Harmlessly, as the programming insists. (How a speeding spaceship can harmlessly bounce off an impregnable wall is a question only a certified grump would ask.) Elected as Planetary Head, she communicates with the fleet commander (through the forcefield? Yeah, sure, why not?) and gives him her demand. Back off – and let us finish the terraforming. They are robots, you see, and want to do their work. 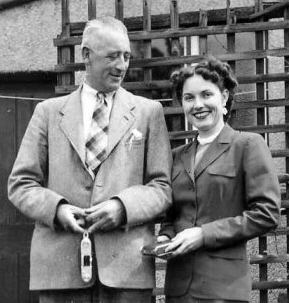 All ends happily, with the fleet commander telling Barbara she’s “a pearl of beauty and worth.” What’s a pearl, asks Barbara. It’s formed in an oyster. What’s an oyster? And so on down the rabbit hole as everybody laughs lovingly at Little Miss Ignorance, the all-powerful finest mind on two planets.

Once the era’s demeaning views of women is subtracted, I think it’s clear Evans meant these stories to be complimentary, with as many jabs as men’s attitudes as digs at women’s (although we never see another female after Betty is tossed). More than that: I think Evans wrote these stories based on Mahaffey. She was legendary in fan circles for being brainy, talented, and beautiful. She also rose overnight from secretary to boss. (Bill Terry’s illustrations, above, look a bit like Mahaffey. An earlier story by Palmer, called “Mahaffey’s Mystery,” contained an uncredited portrait that makes the case.) 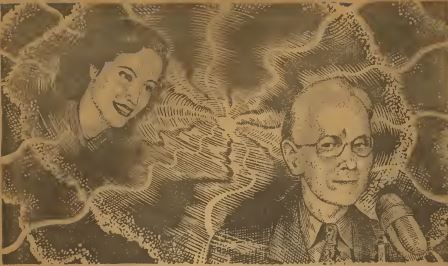 Barbara is not a role model in any normal sense but a welcome change from the unchanging cast of male robots and male saviors in Golden Age stories. No similarly self-confident female robot had appeared in the field since the human brained-cyborg in C. L. Moore’s magnificent “No Woman Born” (Astounding, December 1944). No equal would follow for the rest of the 1950’s either.

These Other Worlds issues are readable online at Archive.org and all three stories should be read together, as they form a single plot arc. If I’m right, they’re a terrific tribute to an editor who should be better remembered than she is.

Steve Carper writes for Digest Enthusiast; his story “Pity the Poor Dybbuk” appeared in Black Gate 2. His website is flyingcarsandfoodpills.com. His last article for us was Rube Goldberg’s Radio Robot.

Steve I fond this article fascinating. But also find myself lacking knowledge, could you please fill me in on:

“Palmer had pushed circulation at Amazing Stories to the  f&sf magazine peak with Shaver until his bosses grew tired of the slime on their fingers. Sure enough, Robert N. Webster was Ray Palmer and Other Worlds was headed down that same path.”

Sorry I just don’t know enough about the old pulps but want to learn more.

Also what would you qualify as third tier as an equivalent today? Semi Pro?

I wouldn’t want to name names for current markets. As a rule of thumb, though, just look at the nominees for the Hugo and the Nebula. You’ll likely see the same set of a half dozen markets reappear year after year. Those are traditionally the first tier. SFWA has a listing of 38 professional markets which new members can use as claims that they qualify for membership. [http://www.sfwa.org/about/join-us/sfwa-membership-requirements/#short] Those other 30 odd may print fine stories but not as consistently.

Thanks for the links Steve.