A robot on radio? What would be the point?

You might ask what was the point of a ventriloquist on radio, but Edgar Bergen made himself a multi-gazillionaire by ignoring other people’s considerations of sense or logic.

Bergen’s success with Charlie McCarthy was still a year off when Reuben Garrett Lucius “Rube” Goldberg had another of his incredibly numerous bright ideas. The cartoonist introduced the strip Mike and Ike (They Look Alike) in 1907. Calling lookalikes by those names became part of the language. So did the obscure slang term “boob” after Goldberg started the strip starring Boob McNutt in 1915. You think Al Jaffee created the bit Snappy Answers to Foolish Questions? Off by about a half-century. Goldberg’s Foolish Questions started appearing in 1915.

Not a bad legacy, though they all pale to his supreme cartoon invention — the Rube Goldberg machine. That term entered the dictionary, too, “accomplishing by complex means what seemingly could be done simply.” Above and below are a couple of examples from the early 1920s.

Note that they never had a distinct name. They just appeared in his daily strip at random, with his other regulars appended whenever he felt like it. They weren’t as original as his other concepts – British cartoonist Heath Robinson’s name was being applied to similar fanciful contraptions before Goldberg ever drew one — but they caught the distinctly American bug for tinkering so well most readers probably could visualize John Hancock using one to sign the Declaration of Independence.

By the 1930s, Goldberg was looking for new worlds to conquer. He thought his wacky brand of humor might work on the radio. The format for radio comedy was narrow if obviously successful. A comedian surrounded himself with an announcer, players for sketches, a band, and some songsters. He hired Vera Van, who would sing Broadway favorites, and the Waldo Mayo Orchestra. After them he ran into a problem. He had no budget for a comedic troupe. Though it seems odd today, shows then often went on the air with no sponsor. Why did he need one? Individual commercials for individual products, called magazine-style advertising, didn’t start until the late 1950s, when television programs became too expensive for one company to afford. Instead, companies bought entire programs so that all the advertising on it was for them, with their name usually prominently in the title. Jack Benny’s radio shows were named The Canada Dry Program, The Chevrolet Program, The General Tire Revue, The Jell-O Program, The Grape Nuts Flakes Program, and The Lucky Strike Program as new companies moved in to enjoy his huge ratings. Yet buying a year’s worth of an unknown show was a risky proposition on the advertiser’s spot. The networks sometimes had no choice. One way or the other, the airtime had to be filled. They put on programs with no sponsor, called sustaining shows, in the hopes that their popularity would attract money. If not, another show quickly was substituted until a winner was found.

Goldberg’s fertile mind had yet another original idea. He’d throw in a gimmick that would make the show irresistible. Instead of a typical announcer or comic with whom to banter and insult, known as the stooge, he’d invent one of his own. A mechanical stooge. A radio robot. 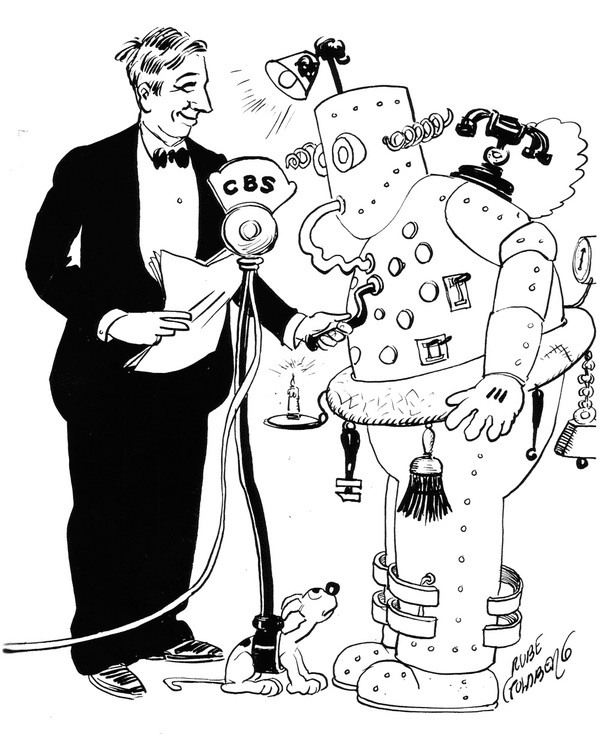 RUBE’S STOOGE
Little “Irving Q. Ironsides,” radio’s first mechanical stooge, does his stuff for inventor Rube Goldberg, recently awarded an old car coupling by the Weehawken Iron Works for “Man’s Inhumanity to Man.” Rube and his radio robot are featured on the WABC-Columbia network every Tuesday and Thursday From 7:15 to 7:30 p.m., EST (December 3). “This cunning little fellow, “announced Goldberg, “comes from a long line of spare parts — some of which he will play on our programs. His grandfather was a Model T, and his father on his mother’s side was an old hot water heater from Rye.”

That promotional memo was the caption to the cartoon. Timing this to appear on December 7 when the program had already been on the air twice couldn’t have been a good idea. Fortunately, newspapers paid little attention to that instruction; lines from it can be found in newspapers for December 3, the date the program debuted. But by then, the robot’s name wasn’t little “Irving Q. Ironsides.” It was “Gadget.” Oops.

Other newspapers ran a different piece of promotion, alerting readers to a new show debuting that very night.

Rube Goldberg, noted cartoonist and humorist, will be heard on a new series of programs beginning at 7:15 tonight. Goldberg will introduce “Gadget,” his mechanical stooge. Rube says that “Gadget” will comment freely on many of the contraptions which have made Goldberg’s cartoons of great interest. On his first program, Goldberg will describe his latest boon to mankind, the “bed crumber,” a complicated affair for the harassed soul who is troubled with cracker crumbs in bed.

So many problems here. The world was different then, and people had fewer entertainment choices, but telling people the day of a program’s debut of its existence can’t be a solid way to ensure an audience. The horrible, dry, formal tone of the prose, so different from that of the promo caption, wasn’t much enticement either. And for a final blow, the “bed crumber,” like all of Goldberg’s inventions, sounds delightful to view on a newspaper page. Hearing a description, by comparison, is like hearing about someone else’s dream. An appearance of his from a 1937 episode of the Shell Chateau has him describing an invention. It’s impossible to visualize and probably would be even if Goldberg weren’t an inept amateur at reading a script and timing his jokes.

How did Gadget work? Just like every other stooge. His lines were read, probably using a funny voice, by Craig McDonnell, who was outed in Jo Ranson’s “Radio Dial Log” on December 11. She said he was known for playing the role of Harka, the Indian ranch hand on the Bobby Benson program. Bobby Benson was a kiddy cowboy show that ran from 1932 to 1936 as Bobby Benson’s Adventures, The H-Bar-O Rangers, B-Bar-B Ranch, B-Bar-B Songs, and Bobby Benson and Sunny Jim. That was just a stop along the way for McDonnell. His name turns up on dozens of shows through the 1940s.

The Internet fails me after that point. No description of the show can be found anywhere. It’s so obscure it fails to make encyclopedias of radio shows and is left out of Rube Goldberg: His Life and Works. Maybe nobody heard it. The show didn’t make it through the winter.

Goldberg recovered from the failure quite nicely. He would win a Pulitzer Prize for Editorial Cartooning in 1948. The National Cartoonists Society annual award for Outstanding Cartoonist of the Year is called the Reuben. Goldberg could afford to shrug off the loss and move on. So could his fans. I wish I could hear Gadget just once, though.

Steve Carper writes for Digest Enthusiast; his story “Pity the Poor Dybbuk” appeared in Black Gate 2. His website is flyingcarsandfoodpills.com. His last article for us was The Romance of Robot.