I began collecting pulp magazines in my early teens. Back then I wasn’t too concerned about condition or rarity… I just wanted to read them. Books like Jacques Sadoul’s 2000 A.D. Illustrations From the Golden Age of Science Fiction Pulps and Asimov’s Before the Golden Age ignited an intense curiosity about these early science fiction tales of alien invasions, space explorers, killer robots, and scientists with labs that would make Reed Richards green wth envy.

Pulps were hard to find in those pre-eBay days, and mostly I had to make do with tattered anthologies. I would have appreciated a magazine like High Adventure very much at the time, let me tell you. The magazine reprints about a half-dozen short stories and novelettes from the pulps in each themed issue; the reprints are facsimiles shot right from the original pages, with art, ads, and all. The theme for issue #143 is Classic Stories from Wonder Tales, and it contains hard-to-find fiction by Manly Wade Wellman, Clark Ashton Smith, Nathan Schachner and Arthur L. Zagat, Gawain Edwards, and R.F. Starzl.

Wonder Tales was one of the most storied of the early pulps. It was founded by Hugo Gernsback after he lost Amazing Stories in a 1929 bankruptcy. The first issue appeared in June 1930, with editor David Lasser at the helm; he lasted three years before Gernsback fired him and replaced him with 17-year old Charles Hornig, who worked for less than a third of Lasser’s exorbitant $65/week paycheck.

The cover story for the April issue (above left) is one of the greatest SF horror tales ever written, Edmond R. Hamilton’s classic “The Man Who Evolved.”

High Adventure #153 doesn’t contain “The Man Who Evolved” (which has been reprinted over a dozen times, including in Before the Golden Age). Instead, it contains five vastly lesser known works, most of which have rarely, if ever, been reprinted. (The exception is Clark Ashton Smith’s “An Adventure in Futurity,” which, like most of CAS’s work, has been kept in print for decades.) 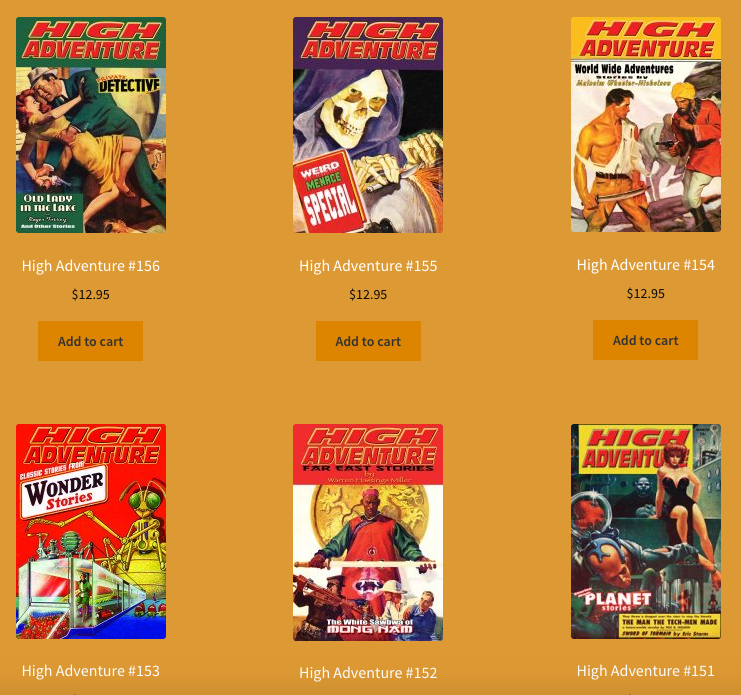 Editor John P. Gunnison does a fine job selecting the themes for High Adventure, keeping the issues fresh. It’s really an excellent resource for anyone who wants to take a tour of the American pulp scene, and the issues are very reasonably priced. Here’s the rundown of the last six issues:

High Adventure #153 was edited by John P. Gunnison and published by Adventure House. It is 118 pages, priced at $12.95. The cover is by Frank R. Paul. Order directly from Adventure House here.

OMG — that cover illustration for “The Man Who Evolved,” I’m willing to place bet money, was direct inspiration for the CGI design of Doctor Who’s tenth doctor/David Tenant when the Master ages him thousands of years and puts him in a cage! 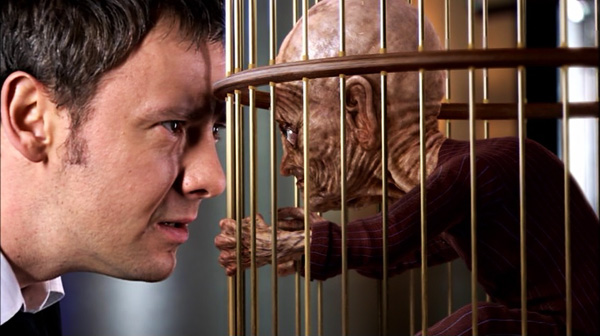 Been chipping away at his Secret agent X, Jungle Stories and Planet Stories reprints and miscellaneous others. He’s al slowly working on G-* and His Battle Aces and has done a slew of Phantom Detective.

Personally, I prefer the full magazine. Reprints rarely print the letters column, the small stories, the articles or the ads for all the cool stuff from correspondence courses to become “Wireless Technicians” to recruitment for the Rosicrucian’s… Neat sign of the times, and good contrast for changing times. I personally do collect mags of different eras, both for my “Pulp” appeal but good graphic design. A bunch of “Men’s” magazines from the 70s for example have a neat graphic design to the lettering/formats – uh, read OMNI early for a tangent – that makes a neat effect. Hint “Display Write” early graphic design program and NOT WSIWG…

But, if you don’t want to diminish the retirement savings and have the S.O. want to kill you there’s this wonderful thing called the “Internet Archive” and stuff like this is clear public domain so it’s there. Quick search engine “Internet Archive Air Wonder Stories” pulls up the issue then click down for “Pulp” tag and a mountain of stuff.

I like to read these on my tablet and with my 128 Gig card haven’t even approached the room despite thousands of PDF files!