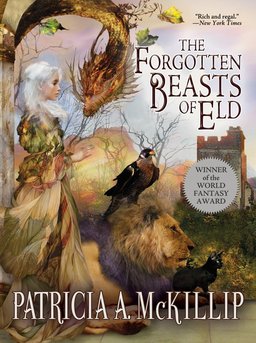 The moment you begin The Forgotten Beasts of Eld, the World Fantasy Award-winning novel by Patricia A. McKillip, you understand you have put yourself in the hands of a masterful wordsmith. McKillip has no peer when it comes to incantatory prose, and her wizardry spells you into a waking dream in this breathtaking tale.

The young wizard Sybel comes from a legendary lineage of animal keepers. After calling a magisterial bounty of magical beasts to her castle, she protects them with the unwavering love of a lioness. When a knight entrusts an infant boy into her care, unbeknownst to the so-called ice-hearted wizard, her life unravels into the pursuit of true love, justice, and the attainment of one’s free will.

Though the animals play a prominent role in the tale, the action mainly revolves around Sybel and the two men who love her. Tam, the babe given to her not long after leaving the womb, cares for her throughout the story. Through the numerous hardships that befall Sybel in her quest for justice in a troubled world, he remains steadfast in his love for the woman he considers his mother.

That his father, Drede, King of Eldwold, commits an act of unspeakable cruelty against Sybel does not hamper his conscience from loving both parents. For this reason, I consider Tam the strongest character in the story. In that situation, he may have chosen a side had McKillip intended for his character to have a predictable arc. Instead, she instilled him with an undying love that remains as the stuff of tireless parent’s dreams.

The same does not apply to Corin, the Knight who entrusts Sybel with Tam’s care. When he resorts to violence in a moment of anger toward Sybel, the radiance of his love for her diminishes to a piercing sliver of gold beneath a door spotted from inside a dark room. It brought to mind how violence does not solve problems of the heart, especially when men inflict it on women.

That Tam behaves in accordance with his title, that of a Prince, shows how much thought McKillip gave to his tremendous character development. Though his father’s actions have enough cruelty behind them to drive the most altruistic lionheart into a frothing rage, that Tam keeps his head speaks to McKillip’s portrayal of a Prince already inhabiting a King’s shoes.

On the subject of Kings, let us not forget the animals who behave in the manner of royals without effort. Ter, Sybel’s loyal falcon, gravitates between his mistress and Tam. Out of all of his animal brethren, his arc proves the most fully developed. He shares distinct character traits with Tam in that his love for both of his keepers remains strong, despite the strains that attempt to thwart their bond.

Ultimately, Cyrin, a shrewd and cunning bull keen on riddles, attempts to thwart the love encroaching on Sybel’s life. But the maneuverings of Moriah, the lovely feline of the night; of Gules Lyon, a gentle beast devoted to Tam; her faithful dragon, Gyld, and her elusive Black Swan of Tirlith more than make up for Cyrin’s deviance by proving themselves steadfast and loyal in their love. I wish McKillip had had more time to delve into their tales, as she did with Sybel and her family. Lucky for us, the enchantment does not stop with the menagerie.

The inclusion of the Liralen, Sybel’s ultimate addition to her menagerie, remains her constant dream. The eventual appearance of the creature, an animal of such beauty as to defy words, has the power to draw the breath from your lungs in rapturous joy. Who am I kidding, you’ll feel the same way throughout much of the tale.

The Forgotten Beasts of Eld will be published on September 19, 2017 by Tachyon Publications.

Zeta Moore’s last review for us was The Loney by Andrew Michael Hurley. She is exploring work in care for individuals on the autism spectrum, and nerding out when she can.

A differing view of the book — here’s what I wrote five years ago. I was reading the first paperback edition (published by Avon, 1975).

Here are some unappreciative comments on a first reading of The Forgotten Beasts of Eld…. I might not have been fair to the book because some things put me off so much.

Why does the title call the creatures “forgotten”? Everyone in the story seems acquainted with them, by reputation at least, so far as I remember. Does McKillip mean that we, readers in the (then) 20th century, have forgotten them? Also, is the Blammor/Rommalb a “beast”? But it seems to be one of the members of Sybel’s gathering of creatures, at least eventually.

One of the things that put me off this author before was the names. “Eld” is the name of a realm, or a shortened name of one (Eldwold), but of course it is an old or poetic word meaning “long ago” — “Of eld it was told that,” etc. Is McKillip deliberately playing with that? if so, it compromises the self-consistency of that world to use the word intending a modern English meaning too, I suppose.

Other names put me off as well — Sybel (sybil), Drede (dread), etc. This is the same author who wrote a book about the Riddle-Master of Hed (head; I guess riddles make you scratch your head). Other names seemed freely borrowed from Tolkien: the royal city of Mondor, the Mirkon Forest. However, Lomar, in Chapter 6, is a name I remember from the Weird Tales circle.

Lynette sounds like a country-western singer’s name, to my ear.

There was much dialogue and it was rarely impressive. The characters are supposed to inhabit a remote and beautiful realm of magical perils, but they talk like this: “How did you talk her into that?” ….. “I never wanted anything special before” (pp. 110, 114 of my paperback edition; both from Chapter 7). And they start to say something and then break off, like characters in banal popular fiction.

The use of similes, usually with like, was really obtrusive; I found myself anticipating the next one, like dreading the next cough of a nearby fellow bus rider when you are trying to read. And I felt that I was constantly being reminded that the book was by a woman because there was so much in it about people’s hair and about their clothes.

It didn’t seem to me that the core story had to be a fantasy. The magical animals appear (off-stage) to break up what would have been a worse war, but otherwise it doesn’t seem to me that they are all that important. The core story seems to be Sybel’s love of her foster-son, her developing feelings for her good suitor and then husband, Coren, and her outrage over her “violation” by Drede, which makes her want revenge at whatever cost to anyone, even alienating Coren. Turns out that during much of the time she was plotting Drede’s demise, he was already dead. At the end of the story, she and Coren are reunited, she receives his forgiveness. Very well, but did this story demand embodiment as a fantasy? It seems a story much like this one could have been cast as a realistic story, since, for me at least, on a first reading, the author did not have the imaginative power needed for excellent fantasy.

But I have to question my reading — or perhaps misreading. The book won the World Fantasy Award. More significantly to me, it prompted my favorite English professor from undergraduate days (a man very knowledgeable about fantasy), after I had my degree, to send me a postcard — the only time he did so — commending the book to me and claiming it “flies in company” with A Wizard of Earthsea, George MacDonald’s Lilith, and Charles Williams’s All Hallows’ Eve — very high praise indeed. Maybe I’d be more impressed on a second reading… but I don’t expect to give it that attention. I guess I don’t much like fantasy, the modern publishers’ genre, though some fantasy is about as important to me as a book can be.

I recall the Dragon magazine review of the then recent reprint of this book being very positive in welcoming the reprint. I had never heard of it or the author before so I eventually got a copy. Alas like many of my books it’s still on the shelf waiting to be read. With so many diverse views think I need to bump it up the list to see for myself:)

[…] An article on Patricia McKillip’s The Forgotten Beasts of Eld :  https://www.blackgate.com/2017/08/24/an-incomparable-voyage-through-dreamland-the-forgotten-beasts-o… […]

I loved The Changeling Sea, but found the much-praised Riddle Master trilogy close to unreadable. Maybe this one will tip the scale for me, one way or another.

It’s been years since I read this one, and I’m a little fuzzy on my reaction to it beyond “loved it.” But that’s my reaction to most of McKillip’s standalone novels.

This novel is a bonafide masterpiece, as well as a modern classic, and one of my all-time favorite novels. Every fantasy fan should read it. My favorite McKillip book–and she’s written a lot of good stuff.