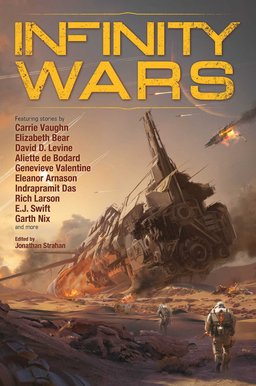 Infinity Wars is the sixth volume in what Jonathan Strahan calls The Infinity Project, a series of science fiction anthologies from Solaris that include Reach For Infinity (2014), Meeting Infinity (2015), and one of the most acclaimed anthologies of last year, Bridging Infinity (2016). Jonathan says he’s “already pushing ahead on the seventh.”

The success of the project is a huge vindication for Solaris, who took a chance on the ambitious series just when it was starting to look like the original SF and fantasy paperback anthology was dead. Infinity Wars arrives in trade paperback next month. Here’s the description.

We have always fought. Tales of soldiers and war go back to the very roots of our history, to the beginnings of the places we call home. And science and technology have always been inextricably linked with the deadly art of war, whether through Da Vinci’s infamous machineries of war or the Manhattan Project’s world-ending bombs or distant starships fighting unknowable opponents.

Oppenheimer once wrote that “the atomic bomb made the prospect of future war unendurable. It has led us up those last few steps to the mountain pass; and beyond there is a different country.” But unendurable or not, future always comes. War was integral to science faction at its birth and remains so today, whether on the page or on the screen.

Infinity Wars asks one question: what would Oppenheimer’s different country be like? Who would fight it? Because at the end of it all, it always come down to a soldier alone, risking life and limb to achieve a goal that may never really make sense at all. How would those soldiers feel? What would they experience?

Infinity Wars tells the tale of soldiers, on the ground and fighting, in the near future and in the farthest reaches of space, using the latest technologies and facing the oldest of fears. New original military science fiction from Eleanor Arnason, Elizabeth Bear, Indrapramit Das, Aliette de Bodard, Nancy Kress, Rich Larson, David Levine, Garth Nix, An Owomoyela, Dominica Phettaplace, E.J. Swift, Genevieve Valentine, Carrie Vaughn, Peter Watts, and Caroline M. Yoachim that will leave you on the edge of your seat.

The previous volumes in The Infinity Project anthology series are:

And our previous coverage of Solaris anthologies includes:

Infinity War will be published by Solaris on September 12, 2017. It is 356 pages, priced at $14.99 in trade paperback and $6.99 for the digital edition. The cover is by Adam Tredowski. Get more details at Jonathan’s website.

See all of our coverage of the best in upcoming SF and fantasy here.