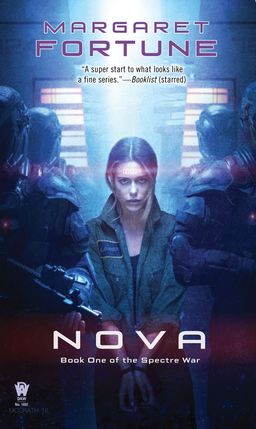 My first time at the Nebulas weekend in May, I was given this massive bag of complimentary books (apparently this is standard, but hey, I’m new) – so many books, in fact, that my friend Derek Künsken and I were detained by Canadian Border Services on our way back to Ottawa. It’s taken me time to go through the bag and see what appeals to me, but I’ve finally been able to start reading them so I can review a few here.

The first few chapters lived up to my expectations, as the character Lia mentally prepares to “go Nova” and destroy a massive space station operated by her designers’ enemies. That in and of itself is a neat concept, especially when things obviously go wrong (if they didn’t, this would be a short story) and Lia faces the fact that she’s going to be around for a lot longer than she expected.

Unfortunately, after about 100 pages of Nova … I just got really bored. Every encounter sees Lia struggling to understand emotions she was never meant to feel, and connect with people who knew the person she’s designed to imitate. That sort of slow character development can be really effective, but in this case it got old really quick as Lia’s reactions became too repetitive.

The greater problem for me was that the characters and world around Lia didn’t strike me as anything special. The space station she’s on is pretty standard fare. The supporting characters are all archetypes I’ve seen before: the loyal and unaware friend, the distant and protective sister who becomes an ally, and so on. And there are human telepaths, since it’s useful for them to exist in this world. I skipped to the back of the book and while there are a couple twists later on, nothing there looked dramatic enough for me to go back and finish the novel.

DAW has had a great track record of appealing to me, but while Fortune is a solid writer, it takes more than just mechanics to draw me into a story.