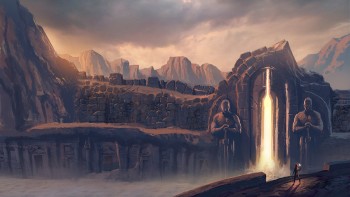 We’re nearing the end of our Kickstarter for Mysterion 2, the second volume of our anthology of Christian-themed speculative fiction.  With only a week left, we’re still a ways from our funding goal. Since Kickstarter is all or nothing, if we do not make our goal, we do not receive any money, and Mysterion 2 will not happen.

While that would be unfortunate — we believe that Mysterion is a unique market, paying professional rates for speculative fiction with Christian characters, themes, or cosmology — we decided to use Kickstarter for exactly this reason.

For the first volume, we used Patreon. Patreon’s normal campaign is as a monthly subscription, but it can also be set so that the patron pays for every post you mark as a paid post. You can put up multiple paid posts per month, or you can put up none. This allowed us not to charge our patrons anything until we delivered an anthology. We felt this was necessary since we were first time anthologists. My wife and I had no idea whether we would receive enough good stories to make a worthwhile anthology. Even if we did, did we have what it took to select the best stories, edit them, format them, put the book together in an attractive package, and deliver an actual book that we would be proud of? We thought we could, but given that we didn’t actually know, we decided not to take anyone’s money until we had the book ready.

But whether we did the anthology or not was completely independent from the amount pledged on Patreon, although the pledges did let us add a couple of stories.

This time was different. We knew we could get enough good stories: we received over 450 stories last time, and only had room for 20. We also knew that we could put together a quality book. That was mostly a matter of figuring out who to pay to do stuff for us. Our main task was selecting and editing the stories, which admittedly was a lot of work, but now we had experience.

What we didn’t know was whether it was worth it for us. Sure, we’ve sold some of the first volume, but we’re still short of breaking even. If we were going to do a second one, we wanted to raise some money first, at least enough to pay our authors — or, well, mostly enough to pay our authors. This time we didn’t want to commit unless there was enough interest–in the form of people willing to exchange cash for books–to get us started. So the Kickstarter is a go/no-go for us, and a no-go is just as useful of a signal as a go, and certainly a lot less work, once the Kickstarter runs its course, at least.

But I would be remiss if I didn’t give you the opportunity to give us a go signal instead. So let me give you the spiel:

Mysterion is the only short fiction market that specializes in Christian-themed speculative fiction (fantasy, science fiction, and horror) and pays professional rates.

Unlike many pro-paying anthologies, we don’t reserve most of our space for established authors. The first Mysterion was assembled entirely from open submissions. This gives newer writers a better chance of acceptance, and gives us the freedom to select stories entirely on the basis of how much we like them and how well they fit with others we’ve chosen.

Unlike many Christian publishers, we don’t expect all our authors to be Christians. Nor do we maintain strict content guidelines around sex, violence, and language; or around theology. We’ve published stories written from deeply Christian perspectives, and stories critical of the Christian faith. We’re more interested in the questions than the answers, in promoting dialogue than in telling people what to believe.

If Mysterion 2 sounds like something you want to see happen, please consider backing us, and at least as importantly, help us spread the word on Facebook, Twitter, your blog, and other platforms. Thank you for your support.