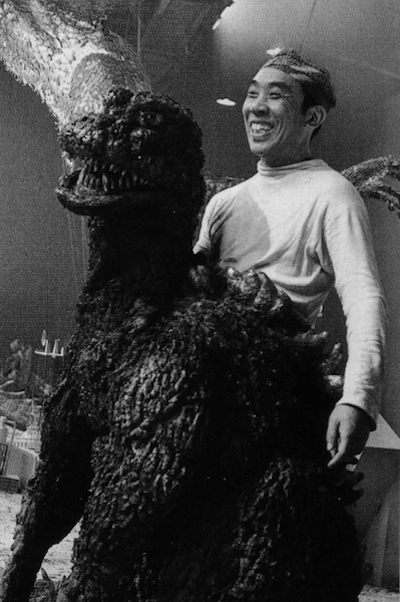 While I was debating on Tuesday whether to focus on writing about the Blu-ray release of Shin Godzilla or completing the next John Carpenter series installment, The Thing, the news hit of the death of one of the last surviving participants of the 1954 Godzilla, Haruo Nakajima, from pneumonia at age eighty-eight. It was a painful blow: that Nakajima was still out there and alive was a reassurance to any Godzilla fan, because he actually was Godzilla — the first performer inside the monster costume, back in the original Godzilla, and the one who stayed with the part the longest, playing the monster until near the close of the original Showa Era. He suited up as Godzilla in twelve films from 1954 to 1972, a record that’s unlikely ever to be beat now that even Japanese Godzilla films have switched to using CGI rather than the old fashioned suits.

We talk about how Japanese giant monster (kaiju) films are done with “man-in-a-suit” special effects, but we often don’t understand what that implies. Since we’re once again deep in the “Does Andy Serkis deserves an Oscar nomination for a performance-capture role?” debate that comes after the release of each of the new Planet of the Apes films, it’s appropriate to remember the great performances from the suitmation actors who long preceded CGI-assisted characters.

And among suitmation performers, Nakajima was one of the finest. He infused Godzilla with a personality that emerged stronger and stronger during the period he was inside the costume. Godzilla, arms stretched forward in an attack pose, daring another giant monster to charge with the slight turn of the head — that’s down to Haruo Nakajima. He influenced the way Godzilla is acted as much as Boris Karloff influenced the Frankenstein Monster.

Haruo Nakajima was born in 1929 in Sekita City, Yamagata Prefecture. At age fourteen he trained as a pilot for the Imperial Navy, although World War II ended before his training did. After a brief stint working in his parents’ meat shop and then as a truck driver, Nakajima entered the International Film Acting School in Tokyo. The Japanese film industry recovered rapidly in the post-war years, and acting opportunities soon opened up at the film studios. Nakajima landed a job with Toho Studios and played his first movie role in 1952 in Sword for Hire. More stunt roles in samurai films followed, including a part in the samurai film, The Seven Samurai, in 1954. (He’s one of the bandits who dies in the “field of flowers” scene.)

More importantly for his career in 1954 was the moment the head of the actors division at Toho told him there was an unusual role he might be suited for. (Heh, “suited.”) Mr. Nakajima’s memories of it years later:

At first I was told there was this new science-fiction film — it was called Project G during pre-production, since they had not revealed the monster’s name yet — and I was introduced to [Special Effects Supervisor Eiji] Tsubaraya. There was a screening on the Toho Studios lot of King Kong, of a print that Mr. Tsubaraya personally owned, and from that I began to study the way a monster should move. Tsubaraya told me it would take years to make a movie like King Kong in Japan, with stop-motion animation. Instead, he said this new movie would be made with monster suits.

Nakajima did additional prep work by going to the zoo in Ueno Park with a sack lunch to watch the movement of gorillas and elephants and any other animal he thought might help him prepare for playing a giant. It was a difficult venture, since Japan had not made any film like it before.

Nakajima couldn’t have known he was about to embark on a packed career of not only playing the King of the Monsters, but also a slew of other kaijus in the Japanese fantasy and science-fiction boom. His other suitmation credits include Rodan (1956), Varan (1957), King Kong Escapes (1966), the alien robot Mogera in The Mysterians (1957), a giant Walrus in Gorath (1962), the digging monster Baragon in Frankenstein vs. Baragon (1965), a flying lion and giant rat in Latitude Zero (169), and a slew of guest-starring beasties in television shows from Tsubaraya Productions such as Ultra Q and Ultraman. Whatever monster Ultraman fought that episode, it was probably Nakajima.

One of his favorite projects was 1966’s War of the Gargantuas, where he played Gaira the evil green gargantua (technically, a Frankenstein monster, although that isn’t clear in the English dub). The Gaira costume allowed Nakajima to use his eyes, and the swift, acrobatic choreography was a major shift from the standard slower-moving kaijus. If you only watch one Nakajima suitmation performance outside of the Godzilla films, make it War of the Gargantuas. It’s all-around one of the best 1960s kaiju films.

Children watching giant monster movies often wish they could step into the costume and act out real city smashing rather than enjoy it vicariously or using toy blocks. When I was seven years old, I knew there couldn’t be a cooler job in the world than to be the person inside the Godzilla suit. But the reality was that Nakajima and his fellow monster performers worked under brutal conditions. It was the exact opposite of “cool.” The costumes were made of thick latex and rubber that didn’t breathe. They were quickly saturated with sweat and became almost impossible to move around in. Adding to the difficulties were the massive amounts of hot lighting needed on the effects sound stages to allow for high-speed photography and the barrage of squibs and explosions erupting around and on the costumes. Nakajima could only remain in the Godzilla costume for a few minutes at a time and had to execute elaborate choreography among pyrotechnics while hardly able to see out of tiny eye holes in the neckline. The job was occasionally hazardous: Nakajima suffered burns from explosions and nearly drowned during some of the water scenes.

Despite all these obstacles, Haruo Nakajima still managed to deliver performances. Special effects master Eiji Tsuburaya wanted to give human qualities to his monsters, and Nakajima was instrumental in this. By the time of the fourth Godzilla film, Mothra vs. Godzilla (1964), Nakajima had invested Godzilla with a fearsome persona that made the monster a true movie star. The advances in suit design gave the actor more freedom of movement, and Nakajima’s creation of the classic Godzilla “attitude” in this film is a marvel. There’s a famous moment during the rampage through Nagoya where Godzilla accidentally trips into a castle and then hammers it apart, acting first from surprise and then turning the embarrassment into a rage at the structure, and concluding with taking a step back to watch the rest of the Shogun castle crumble — that’s pure acting from Nakajima. Through the rest of his time in the part, he filled Godzilla with fearsome spirit: dangerous, aware, taunting … even when Godzilla is supposed to be a superhero. I’ll still pick Mothra vs. Godzilla as Nakajima’s finest turn as the Big G. It’s the best movie of the series, and Nakajima underneath Godzilla’s scaly (or rubbery) body is a big part of its success. 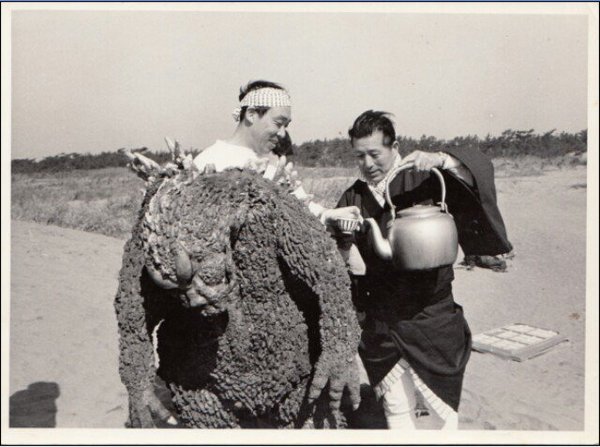 The only Godzilla film during Nakajima’s tenure where he had a reduced role was Son of Godzilla (1967). To help create a size difference between Godzilla and its (adopted?) child Minira, a taller stunt performer was hired for the enlarged suit. Nakajima still fit into a different costume for two scenes of Godzilla in the water. This was the time Nakajima almost drowned, by the by.

Nakajima said farewell to acting after Godzilla vs. Gigan in 1972. The Japanese film industry was in decline and Toho was releasing many of its contract actors. Worse for Nakajima was the 1970 death of Eiji Tsubaraya, the man who created the Godzilla suits that gave him a career. He stayed on for two more Godzilla films at the request of Tsubaraya’s VFX successors, but after the layoffs hit him he decided to leave monster acting. “I was forty-three when I retired, but it wasn’t because of my age. I was physically fit, and I felt I could keep doing it.”

The first Godzilla film without Nakajima, Godzilla vs. Megalon (1973), shows how much was lost when he hung up the back spikes. Godzilla in this film is bouncy, dopey, cowardly — all wrong. It’s a kiddie performance made of tics instead of a personality. The movie is the nadir of the series, but Nakajima might have helped Godzilla maintain some dignity through it.

Later Godzilla suit performers have done excellent work, but the Heisei and Millennium G-movies used costume designs that allowed much less of the performer underneath to shine through, and the action blocking didn’t give much space for them to show what they could do.

Although he quit playing Godzilla and other monsters forty-five years ago, Haruo Nakajima remained close to fandom for the rest of his life. He attended numerous conventions, coming to New York, Los Angeles, and Chicago to show his love for the monsters he played to the fans. He was proud of his legacy, as he deserved to be. There were four main “Godzilla Fathers” who were the creative powers behind the monster’s creation and success: director Ishiro Honda, effects supervisor Eiji Tsubaraya, producer Tomoyuki Tanaka, and composer Akira Ifukube. But Nakajima literally was Godzilla, the hidden hero who brought to life the ultimate monster to the joy of millions across the globe. Long May He Stomp Evacuated Buildings in the Kaiju Elysian Fields.

Origins: Godzilla: King of the Monsters – Taking Up Room