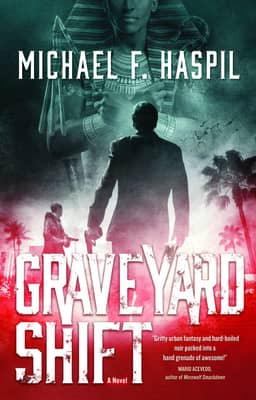 All that talk about the recent crop of supernatural detectives on the market has me hankering to sample a new one. And lucky me — next month Tor will publish Graveyard Shift, a gritty police procedural featuring a former pharaoh who squares off against an ancient vampire conspiracy.

It’s the debut fantasy novel by Michael F. Haspil, arriving in hardcover from Tor Books next month. And you have to credit him with a certain daring right out of the gate. It’s not many horror writers who would steal the title from Stephen King’s most famous short story collection, first published nearly 40 years ago. Will modern readers even care? My guess is no, but I guess we’ll find out.

Alex Menkaure, former pharaoh and mummy, and his vampire partner, Marcus, born in ancient Rome, are vice cops in a special Miami police unit. They fight to keep the streets safe from criminal vampires, shape-shifters, bootleg blood-dealers, and anti-vampire vigilantes.

When poisoned artificial blood drives vampires to murder, the city threatens to tear itself apart. Only an unlikely alliance with former opponents can give Alex and Marcus a fighting chance against an ancient vampire conspiracy.

If they succeed, they’ll be pariahs, hunted by everyone. If they fail, the result will be a race-war bloodier than any the world has ever seen.