Pulp Literature has been around for several years now, having published ten thick issues… While it has only a few swords & sorcery stories, I was blown away by PL’s quality and richness…. Pulp Literature is filled with a wide variety of genres. Senior citizen detectives, Jewish monsters in contemporary Ontario, poetry, all sorts of good things. Don’t let that literature tag scare you off. The editors’ love of pulp in so many varieties means they have a love of storytelling and don’t neglect it. How such a magazine has escaped wider notice eludes me… Pulp Literature reminds me of Michael Chabon’s undertaking to revitalize contemporary literary writing with plot and narrative — which I completely appreciate and love.

That sounds pretty darn good. After I read Fletcher’s review I promised myself I’d check it out, so I was delighted to see the Winter 2017 issue had not one but two stories by acclaimed fantasy author Matthew Hughes (Black Brillion, The Damned Busters), one under his full name and a second under “Matt Hughes.” (He also publishes under Hugh Matthews, because why not?) Plus there’s also fantasy tales by FJ Bergmann, Rebecca Wurtz, Anna Belkine, Carolyn Oliver, Mel Anastasiou, and JM Landels.

But you should move fast — Pulp Literature 13, cover-dated Winter 2017, came out earlier this year, but the Spring issue arrived hard on its heels. Terrific fiction, top-notch authors, great covers and solid value, and the magazine comes out on a regular schedule? I’m not sure how they manage it, but I’m certain there’s a deal with the devil in there somewhere. 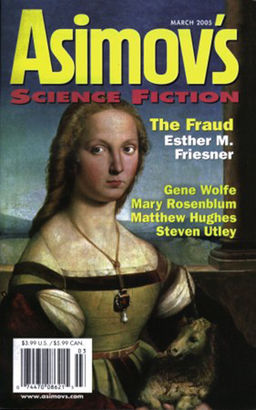 Both Hughes stories are reprints. “The Devil You Don’t” originally appeared in the March 2005 issue of Asimov’s Science Fiction (at right), and “Fishface and the Leg,” one of the author’s earliest tales, originally appeared in a “supplement to a weekly farmers’ newspaper out of Saskatchewan called The Western Producer” ‘way back in 1982. Matt describes it as a detective story. Either way, it’s unlikely you’ve seen this one before, so it’s new to you.

The cover, “The Shadow,” is by Zoran Pekovic.

Pulp Literature is edited by Jennifer Landels, and published four times a year by Pulp Literature Press. The cover price is $14.99 Canadian for a thick 220 pages. Subscriptions are $50 Can/year ($66 in the US). Check out the complete TOC and order issues at the website.

Our Late May Fantasy Magazine Rack is here, and all of our recent magazine coverage here.

“That sounds pretty darn good. After I read Fletcher’s review I promised myself I’d check it out, so I was delighted to see the Winter 2007 issue had not one but two stories by acclaimed fantasy author Matthew Hughes (Black Brillion, The Damned Busters), one under his full name and a second under “Matt Hughes.”

John, there is a typo in the article on the year of the issue your mentioning. Pulp Literature sound intriguing. I’ll have to check it out.

He says as he makes his own typo! Doh!

Sharp eyes! Thanks for the correction. I’ve fixed it.