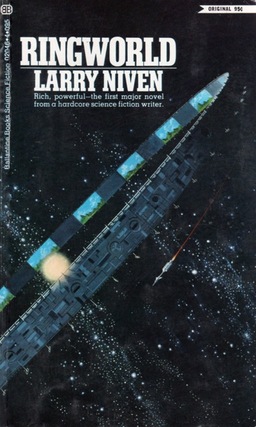 Back in around 1980, when I read Larry Niven’s multi-award winning Ringworld (1970) for the first time, it totally blew my mind. I had never read anything that conveyed the feeling of BIGNESS so powerfully and so well. Rereading it yesterday, I was thrilled to discover it still does. It’s got its flaws, some pretty big ones in fact, but for much of its length it remains a terrific read. Despite having won numerous awards and a career that’s spanned over five decades, it remains the book he’s best known for.

Beginning with 1964’s “The Coldest Place,” Larry Niven began laying out the history of humanity’s expansion and exploits across a 30-light year bubble of of the Milky Way he dubbed Known Space. Over the next six years, he wrote about another twenty novels and stories that span from the late 21st century to the 32nd. Along the way he introduced some of the most iconic sci-fi aliens, including the cowardly Pierson’s Puppeteers and the ferocious Kzin (who now feature in their own unending series of shared-world anthologies).

Louis Wu is bored. Bored with an Earth where everywhere and everyone has blended into a bland homogeneity. In the past, he has taken what he calls “sabbaticals,” and gone on months-long solo deep space jaunts. The 1968 story, “There Is A Tide,” describes one of his voyages in great detail.

In 2850, while celebrating his 200th birthday, wandering the globe to avoid his own guests, stepping from one teleportation booth to another, Louis suddenly appears in an unexpected location with an even more unexpected host — a Pierson’s Puppeteer. Once, the three-legged, two-headed aliens maintained a vast commercial empire, trading in highly advanced technologies. Then, two hundred years ago, they pulled up stakes and left Known Space. Having learned the galactic core had exploded and the resultant wave front would reach Known Space in 20,000 years, they decided it was time to find safety. No human ever heard from them again or knew where they went.

The Puppeteer, who calls himself Nessus, is putting together an exploration mission to a point 200 light years from earth. The only information he will give Louis is a picture:

He took the holo print and looked into it.

At first it made no sense at all, but he kept looking, waiting for it to resolve. There was a small, intensely white disc that might have been a sun, G0 or K9 or K8, with a shallow chord sliced off along a straight black edge. But the blazing object could not have been a sun. Partially behind it, against a space-black background, was a strip of sky blue. The blue strip was perfectly straight, sharp-edged, solid, and artificial, and wider than the lighted disc.

“Looks like a star with a hoop around it,” said Louis. “What is it?”

Rounding out Nessus’s crew are a Kzin dimplomat of low prestige, known only by his job title, Speaker to Animals (which gives a sense of what Kzin think of non-Kzin), and Teela Brown, a girl who happened to be in attendance at Louis’s party. 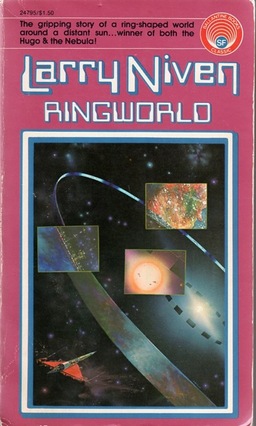 While Nessus wants Speaker for his military and physical prowess, he wants Teela for something very strange indeed. In trying to understand how humanity has managed to survive near-annihilation from nuclear war, overpopulation, pollution, and any of a dozen other events, the Puppeteers have concluded it is an extremely lucky race — in fact, lucky to the point of impossibility. The descendant of five winning generations of Earth’s Birth Lottery — by which they were allowed to have more than one child — Teela has been marked by Nessus and his people as one of the luckiest people on the planet.

After leaving Earth on board the super fast ship the Long Shot, before reaching their final destination, they discover just what happened to the rest of the Puppeteers. It’s the first of many moments of great wonder in Ringworld. I won’t reveal what they learn, but it’s something as big and terrifically crazy as anything in the stories of E. E. Smith and his contemporaries. I think that’s one of the most appealing aspects of Niven’s work for me: his settings and aliens are as magnificently strange and titanic in scope as the wildest and wooliest space operas, just with a touch more logic and consistency.

At the same time they learn the Puppeteers’ fate, they finally learn exactly what they will be exploring: a habitable ring of immense proportions orbiting a sun.

The chapters chronicling their arrival at the titular artifact, and the crew of Long Shot’s initial exploration, are the highlight of the novel. Niven succeeds in making infectious the crew’s awe in the face of the ring. When the Long Shot crashes into the ring, it gouges a crater thousands of miles long, kicking up a plume of dust along its entire path. Then there is the mountain of impossible proportions:

It was magnificent. One mountain, roughly conical, all alone, forming no part of a chain. It had the look of a volcano, a mock-volcano, for beneath the Ringworld there was no magma to form volcanos. Its base was lost in mist. Its higher slopes showed clear through what must be thinning air, and its peak had a shiny look of snow: dirty snow, not bright enough to be clean snow. Perhaps permafrost.

There was a crystal clarity to the edges of the peak. Could it be thrust clear out of the atmosphere? A real mountain that size would collapse of its own weight; but this mountain would be a mere shell of ring foundation material.

“I’m going to like the Ringworld engineers,” said Louis Wu to himself. On a world built to order specification, there was no logical reason for such a mountain to exist. Yet every world should have at least one unclimbable mountain. 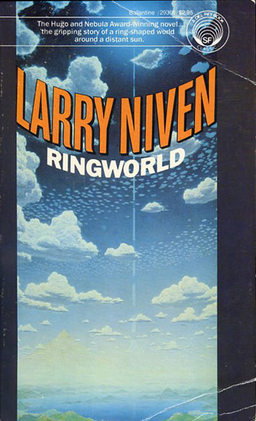 Unfortunately, Ringworld begins to fall apart in its last third. A falling out between Nessus and the rest over revelations of ghastly Puppeteer meddling in Kzinti and human affairs leads to a separation of the party. Then they fly and talk to each other over communicators. A lot. Then, after a moment of real excitement during a great storm, Teela disappears — from the scene and from the story. There’s a whole chapter Louis and Speaker spend suspended in an old prison, slowly dehydrating to death. It’s a disappointing string of disappointing chapters that suck a lot of the wind out of the book.

Unlike many of his hard sci-fi predecessors’ works, there is a fair amount of sex in Ringworld. It’s not too badly written, but things do get a little out of hand with the introduction of the Ringworlder, Prillar. She’s a professionally trained starship prostitute capable of manipulating Louis by expert knowledge of nerve clusters. In the end, it gets more than a little silly, and her character never gets the chance to be much more than a collection of physical talents and attributes.

Despite its lackluster final stretch, Ringworld is buoyed by Niven’s fantastic worldbuilding and Louis Wu. As much of the book is dedicated to the introduction and exploration of Ringworld, it also serves as a deep history of Known Space and its inhabitants. Things that were hinted at in earlier stories are brought to fruition here.

Louis Wu describes himself as “not creative,” instead preferring to be someone who finds things. He is also a man who is two centuries old, and knows the right questions to ask and clues to look for. This makes him the perfect vantage point for the reader to experience the spectacle of the hoop around a star.

Ringworld and the rest of Niven’s Known Space stories were a big part of my youthful science fiction reading. They were books that I and all my friends read, some repeatedly. Returning after many years, I was happy to find it not altogether unpleasant.

Note: There is one very good sequel by Niven, Ringworld Engineers (1979), followed by the mediocre but interesting The Ringworld Throne (1996) by him as well. Since then, there has a been a spate of additional sequels and prequeld by Niven, alone, and in collaboration with Edward M. Lerner. While I haven’t read them, I also haven’t read anything commendable about them.

Yes, I really enjoyed Ringworld & Ringworld Engineers, and all of the classic-era Known Space books, but was not impressed with Ringworld Throne & later entries.

Part of the problem, I think, was that he kept trying to retrofit contemporary ideas of what high-tech would be into a universe that had originally been conceived in the 60s & 70s — nanotech was _not_ a good fit for the Ringworld.

@Joe H. – It’s been so long since I read Throne, and I only read it the once, that I forgot that. The same sort of thing happened with CJ Cherryh’s Hellburner. VR was all the rage at the time and it felt shoehorned poorly into an otherwise good book.

TBH, the nanotech in particular might have been in a later book than Throne — was Throne the one that was all about the vampires?

OK, checked my shelf and yes, I think the specific stuff I was thinking of was in Ringworld’s Children.

I completely agree — RINGWORLD had a good start and lots of interesting stuff, but it fell apart at the end.

(Kind of a metaphor for Niven’s whole writing arc, eh?)