Captain Future was created by editor Mort Weisinger way back in 1940, but it was the great pulp writer Edmond Hamilton who made him popular. Hamilton wrote dozens of stories featuring the futuristic adventurer between 1940 and 1951, such as “Captain Future and the Seven Space Stones,” which appeared in the Winter 1941 issue of Captain Future: Man of Tomorrow (above left, cover by Earle K. Bergey). Most of Hamilton’s short novels were reprinted in paperback in the 60s, and there was even a 1978-79 anime production that brought the Captain some fame in markets like Spain and Germany, but in general the character was long forgotten here in the US by the mid-80s.

In 1995, Allen Steele wrote “The Death of Captain Future,” a fond homage to Hamilton’s classic tales. It was the cover story for the October 1995 issue of Asimov’s Science Fiction, with a stellar retro-pulp cover by Black Gate cover artist Todd Lockwood (click the image above left to see Todd’s original painting). “The Death of Captain Future” was nominated for a Nebula Award, and won the Hugo Award for best novella of the year. Steele returned to the same characters four years later with “The Exile of Evening Star” (Asimov’s SF, January 1999).

Fast forward nearly 20 years, and we find Steele’s brand new novel Avengers of the Moon on sale at bookstores across the country. It returns once again to Hamilton’s Captain Future milieu, but with a more ambitious tale, and this time Steele hews much closer to the original source material, right down to Captain Future’s colorful cast of sidekicks, and the villainous U1 Quorn, a half-Martian renegade scientist. Avengers of the Moon was published in hardcover by Tor Books this week; the cover artist is uncredited.

Ross Johnson at the The B&N Sci-Fi & Fantasy Blog offers up a little more detail on the novel:

One of writer Allen Steele’s earliest works was the 1996 Hugo Award-winning novella “The Death of Captain Future,” which rescued the title character from the ash heap of pulp SF history (we’re talking the 1940s here). That story was billed as a tribute to the original stories by Edmond Hamilton, though it took a meta approach to the character that was more about the ways in which storytelling had changed over the decades since Hamilton sent him off on a mission through space… Steele has returned to the world of Captain Future with the novel-length Avengers of the Moon, and done something surprising in the process: he’s chosen to play it straight.

Barely out of his teens, Curtis Newton leads a shy, quiet life in an isolated lab on a little-visited corner of Earth’s moon, though not without a few friends: intelligent, though boxy, robot Grag; and Otho, an android with human-like sensibilities. There’s also the Brain: a brilliant scientist whose gray matter was transferred into a flying drone… As the novel opens, Curt learns new details about the deaths of his parents, including the identity of the man responsible: a powerful senator. Vowing revenge, Curt reluctantly adopts the code-name Captain Future and makes plans to assassinate the senator to avenge his parents’ deaths. His relatively simple plot leads him into an encounter with James Carthew, president of the Solar Coalition, who winds up recruiting Curtis for a more complicated scheme to uncover the dealings of U1 Quorn, a criminal mastermind behind all manner of dirty deeds.

All of these elements — including the group of allies Curt picks up along the way — were present in the vintage Captain Future stories; Steele has only rejiggered them a bit for modern audiences without betraying any of their old school charm.

Curt Newton has spent most of his life hidden from the rest of humankind, being raised by a robot, an android, and the disembodied brain of a renowned scientist. This unlikely trio of guardians has kept his existence a closely guarded secret after the murder of Curt’s parents.

Curt’s innate curiosity and nose for trouble inadvertently lead him into a plot to destabilize the Solar Coalition and assassinate the president. There’s only one way to uncover the evil mastermind ― Curt must become Captain Future.

With the permission of the Edmond Hamilton estate, Allen Steele revives the exciting adventures of Captain Future.

For pulp fans, the tireless Stephen Haffner at Haffner Books has assembled many of the original pulp tales — together with lots of extra material, including the letters column, the original pulp covers, and interior illustrations — in three gorgeous hardcover volumes. They’re part of their Collected Edmond Hamilton series, must-have books for any serious pulp collector. 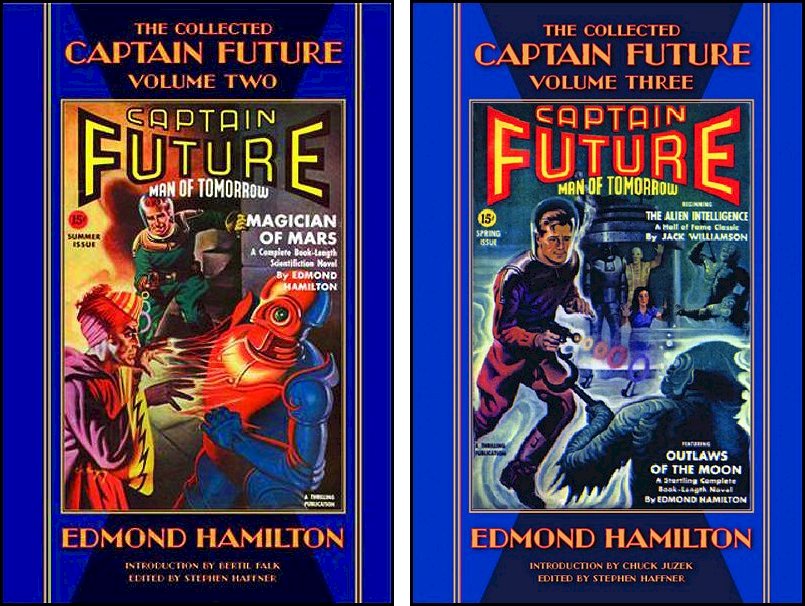 Our previous articles in the Tale of Two Covers series include:

How interesting that the term “scientifiction” is still used on the 1941 cover, more than a decade after it had been superseded by “science fiction”.

And another random note: in the Silver Age, Superman was also occasionally referred to as the “Man of Tomorrow”. I’m talking about c. 1966 – 1972, when I was a reader of DC comics. And I seem to recall that Mort Weisinger was working for DC at the time. Coincidence?

More than any other single individual, Mort Weisinger (who was legendary as an impossible to work for SOB) was responsible for the creation of the Golden and Silver Age Superman mythos, the greatest in the history of comics…until it was stupidly demolished and dismantled, starting with the Crisis on Infinite Earths, the most shortsighted, dunderheaded…uh oh. I’m ranting, aren’t I?

> How interesting that the term “scientifiction” is still used on the 1941 cover, more than a decade
> after it had been superseded by “science fiction”.

I hadn’t noticed that! Mort and his friend Julius Schwartz were both huge fans of Gernsback’s Amazing Stories, and their careers grew almost entirely out of early SF fandom… so I guess for some fans, old habits died hard.

> in the Silver Age, Superman was also occasionally referred to as the “Man of Tomorrow”.
> I’m talking about c. 1966 – 1972, when I was a reader of DC comics. And I seem
> to recall that Mort Weisinger was working for DC at the time. Coincidence?

I doubt it was coincidence! Weisinger was famous for re-using plots (famously recycling a Superman plot for Superboy’s first encounter with Mon-El, for example). So maybe re-using a tag line was no big deal.

> More than any other single individual, Mort Weisinger (who was legendary as an
> impossible to work for SOB) was responsible for the creation of the Golden and
> Silver Age Superman mythos, the greatest in the history of comics…

As a young fan, I absolutely adored the Weisinger Superman. The bottle city of Kandor, the Fortress of Solitude, Krypto the superdog, Supergirl… the whole thing. Totally different from the Marvel universe, but just as rich in its own way.

I get your distaste for Crisis, but I don’t think it ruined Weisinger’s mythos. It’s still there, captured in all those fabulous back issues, and I still dip into them from time to time.

Any Captain Future fan should seek out a hilarious short piece by S.J. Perelman (who had a hand in writing some of the best Marx Brothers films) titled “Captain Future, Block That Kick!”

[…] I’m a Captain Future fangirl. When I first heard about Allen Steele’s new Captain Future novel, Avengers of the Moon, I was instantly curious. Who was this fellow writing about my fave “Wizard of Science?” I just […]