Last month I was delighted to find a brand new copy of Ellen Kushner’s first anthology Basilisk on eBay for the criminally low price of $1.50 — less than cover price! The copy I found was the original 1980 edition (above left), with the gorgeous Rowena cover. In fact, it wasn’t until I started researching it that I discovered it was re-issued in 1984, with a brand new cover by Stephen Hickman (above right).

Well, here was a curious mystery. Why would Ace Books, no newbie to fantasy publishing, replace such a colorful and effective cover? Nothing against Hickman’s cover — which, in fact, I think is tremendously effective — but it’s hard to compete with a life-and-death knife fight between a beautiful desert princess and a buck-naked green guy. And let’s face it, if you have to have a topless princess and a naked green guy on your cover, Rowena is the artist to put them there.

Maybe 1980 was a little too early to introduce naked green butt to mass market? Maybe Basilisk was intended as the first in a series, and when that didn’t happen, Ace thought Hickman’s cover more suited to a one-off anthology? Obviously, there’s a story here. And the person to tell that story is Ellen Kushner. I reached out to her last week with a few questions, and was very pleased to get a lengthy (and very entertaining!) response. Rather than edit it to fit a shorter article, I decided to reproduce the entire thing here. Ladies and gentlemen, the marvelous Ellen Kushner.

Delighted to have the chance to set the record straight! There is, of course, a story to go with this:

The Rowena cover came first — I mean, before there was even an anthology! It was painted for Ace Books as the cover to Lynn Abbey’s first novel, acquired by my boss, Jim Baen. But when Tom Doherty (then head of Ace) read the novel, he decided it needed a different cover, and so we were left with a stunning Rowena painting — and it wasn’t cheap!

I had been working as Jim’s Editorial Assistant for less than a year, then: My first job, right out of college, and I felt so lucky to get it! Jim had been the editor of Galaxy magazine, and knew all about SF — but Fantasy wasn’t really his thing, so he put a lot of trust in me.

Still, you can imagine my feelings when he summoned me into his office one day, showed me the Rowena painting, and said, “Can you put together a fantasy anthology we can use this cover for?”

Story of my life. Crazy shit like this happens all the time. I said Yes! of course — but was perfectly aware that the stories I picked were not going to have a lot to do with the cover illustration… still, I wasn’t going to turn down the opportunity!

Jim expected me to get a lot of cheap reprints (which is what I had been doing for Ace with novels: John Bellairs, Lola Burford… they’d never been in paperback before) — but I ended up buying a lot of original stories, too, from Elizabeth Lynn, Joan Vinge… agent Virginia Kidd got wind of it, and sent me killer stories from Michael Bishop and (I think) R.A. Lafferty… It’s an anthology I’m still really proud of.

It’s also how I met Terri Windling, who did the interior illustrations (which much more accurately represent the aesthetic of the stories). She’d just come to town, and was showing her art portfolio around. Jim thought I’d like her work, and that he wouldn’t have to pay her much…

Terri, of course, essentially took over my job as fantasy expert for Jim a few months after I left Ace. So I suspect she was the one who decided Basilisk should be reprinted four years later (in 1984) with the Hickman cover.

That was a serious thrill for me. By then, Jim had moved on to found Baen Books, and Susan Allison headed Ace (soon to become Ace/Berkeley) — so maybe it was Susan… We’d worked together at Ace for a few months before I left, and she always had great taste. She and Terri were a wonderful team, so most likely they did it together. The world of fantasy really shifted with them both behind it. But that’s another story for another cover… 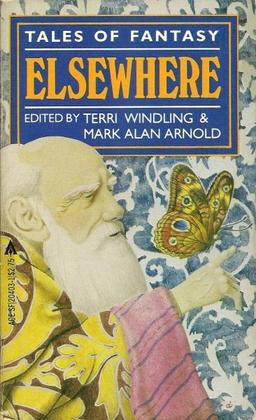 Basilisk wasn’t meant to be the start of a series at the time, but did indeed turn out to be the template for Terri’s remarkable Elsewhere anthology series — which published my first short story!

As I said: Crazy. Like this. All the time.

But it’s only in looking back that you can see how the patterns work themselves out.

Here’s the complete Table of Contents for Basilisk, including a Viriconium novelette by M. John Harrison and an Earthsea story by Ursula K. Le Guin:

“Peter Kagan and the Wind” by Gordon Bok, was actually a sort of spoken-word song on one of Bok’s albums — here it is — just beautiful — listen when you have time.

Thanks for the opportunity, John!

Our previous articles in this series include:

Ellen Kushner is the author of the World Fantasy Award-winning Thomas the Rhymer, as well as the World of Riverside novels (Swordspoint, The Privilege of the Sword, and The Fall of the Kings with Delia Sherman,). She is also an award-winning audio book narrator and stage performer, the creator and former host of public radio’s national series Sound & Spirit, and a popular teacher and speaker. She lives in New York City with Delia Sherman and no cats whatsoever. Visit her on Twitter, Facebook and Tumblr via www.EllenKushner.com.

Love both covers on Basilisk! Another eBay score for you! You’re on a roll!

I also bought that copy of Elsewhere (brand new!) for $1.50. That seller really kept her books in great shape. 🙂

Thank you for chasing down this delightful story. Long may Ms. Kushner’s life be crazy like that, all the time.

The original cover is pretty surprising. I guess the naked male butt could be there because it was both green and translucent?

I suspect that’s the truth of it. Still a pretty daring cover for 1980, I think.

What’s most striking to me about the first cover is Rowena’s composition of the scene and positioning of the figures. When I first looked at it, I didn’t notice that the horned-horse creature was further back (which you can tell when you notice that the naked green guy is semitransparent). It looked to me like the horse-creature was bursting forth from his abdomen (like he was summoning forth his Patronus or something).

Thus, to me it appeared that the naked green guy was flashing the desert warrior princess, and rather than being hung like a horse he was hung with a horse.

It’s entirely possible various misinterpretations of the djinni’s, ah, flashing posture, are what necessitated a change of cover.

It’s very clear what’s going on if you take a closer look. After just a quick glance, however, you can assume all sorts of things.