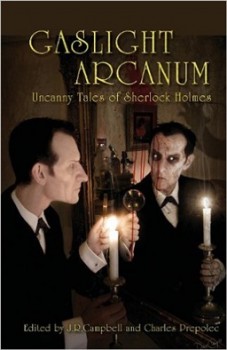 I don’t really do horror. Now, I am a huge Robert R. McCammon fan and of F. Paul Wilson’s Repairman Jack. Of course, I’ve read a fair amount of H.P. Lovecraft’s Cthulhu stuff (man, that creeps me out). And bits here and there from Robert E. Howard, Les Daniels, Anne Rice and a few others. But overall, I don’t really enjoy the genre, so it’s not an area I have a lot of experience with.

However, I have come across several examples of Holmes in the genre. And it being Halloween, let’s take a quick look at few titles that involve horror or the supernatural. Those two things aren’t always the same, you know.

The Unopened Casebook of Sherlock Holmes (John Taylor) There was a time when Holmes pastiches were relatively uncommon and, pre-Amazon, you grabbed what you could when you saw them on the shelves. I still remember being excited to buy books from Richard Boyer, L.B. Greenwood and Frank Thomas. Another was a short story collection by John Sherwood, a writer for the BBC. “The Wandering Corpse,” “The Battersea Worm,” “The Paddington Witch,” “The Phantom Organ,” “The Devil’s Tunnel” and “The Horror of Hanging Wood” are all supernatural-tinged stories. The last one remains a favorite of mine and something I wish I’d thought up.  Taylor wrote four more Holmes adventures, which were read aloud by Benedict Cumberbatch. I’ve not heard them, but every couple of years, around this time, I read a few stories from his book.

Gaslight Anthologies (edited by J.R. Campbell & Charles Prepolec) In 2008, Canadians Campbell and Prepolec put out Gaslight Grimoire, a collection of eleven creepy Holmes tales. It was followed by thirteen more in Gaslight Grotesque, and finished up with another dozen in Gaslight Arcanum. That’s 36 stories of horror and weirdness. You can certainly tell what you’re getting from the covers of the last two books. If you’re a Holmes fan and really like the horror genre, these three anthologies are just what you’re looking for. 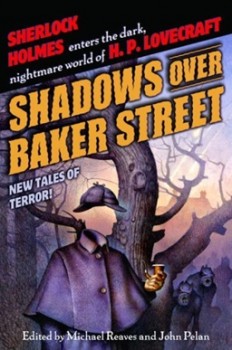 Shadows Over Baker Street (edited by Michael Reaves & John Pelan) A book I purchased at a Barnes and Noble in College Station, TX: just up the street from the restaurant that catered my wedding (hey, it’s my post. I can write what I want!). This was a neat concept: Holmes in the world of H.P. Lovecraft – especially the Cthulhu mythos. This was before several authors (and even a PC game) tackled the theme. It’s best known for containing Neil Gaiman’s Hugo Award winner, “A Study in Emerald” (which became a board game). That story brought the Elder Ones to England and turned the Holmes-Moriarty story on its head. Like most anthologies, this is a collection with some stories better than others, but as far as weird Holmes goes, it’s worth reading.

The Ghosts in Baker Street (Martin Greenberg and Jon Lellenberg) I credit Martin Greenberg with reviving the Holmes anthology market. A decade after The New Adventures of Sherlock Holmes, Holmes for the Holidays (which I love) was the first of several Holmes collections Greenberg helmed. The Ghosts in Baker Street was the fifth of this run and involved Holmes and the supernatural. There were a few stories I liked, but I don’t remember going back to this one much. I can’t find my copy at the moment, which is pretty unusual. Could be some unnatural activities going on…

Holmes – Dracula File (Fred Saberhagen) This was one of my favorite pastiches when I first discovered Saberhagen’s novel. Dracula comes to London and gets involved with Sherlock Holmes and a certain rat which the world is not yet prepared to learn about. However, over the years, it’s fallen out of my favor. The portrayal of Dracula as an honorable nobleman is too nice, and the relationship between he and Holmes is weak. It’s not bad, but I’ve come to like many other pastiches more. There was a sequel, Séance for a Vampire, in which Watson seeks help from Dracula to find the missing Holmes. It’s not a re-read.

Author of the Amos Walker hard boiled private eye books, Estleman is a long-time Holmes fan. His first two pastiches were Sherlock Holmes vs. Dracula and Dr. Jekyll and Mr. Holmes. The first book is a revision of the Stoker account, with Holmes playing a key role. I find this more ‘realistic’ (you know what I mean) than Saberhagen’s fanciful novel and I think Estleman has Holmes and Watson down about as well as anybody. I had never actually read Robert Louis Stevenson’s classic and I sought it out after enjoying Estleman’s pastiche about that other doctor. Both make good Halloween reading for Holmes fans without being heavy on the horror scale. The Perils of Sherlock Holmes, which collects his short stories, is a keeper. 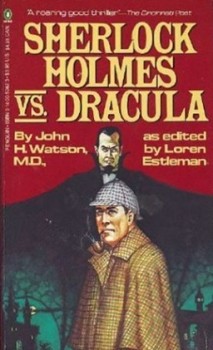 Caleb Carr’s The Alienist was a smash best seller. Not long after that success, he turned his attention to Holmes with The Italian Secretary. If I remember correctly, it was originally a long short story – not quite a novella. Then Carr expanded it to novel length. I seem to recall that it involved ghosts. I didn’t care for it much at all and don’t remember a whole lot. But it’s been ten years and because there was so much hullabaloo when it came out, I should probably give it a second chance.

The List of Seven – The Six Messiahs (Mark Frost)

Mark Frost is best known for co-creating Twin Peaks (which will be back in 2017!). He wrote The List of Seven, in which Arthur Conan Doyle is the main character, assisted by a super spy with very Holmesian characteristics. He followed that up with The Six Messiahs. Both books have plenty of creepiness and make good reading for Holmes fans. I wrote about that first novel here at Black Gate.

I’m sure there are a lot of other such books from a variety of imprints (including self-published efforts). Titan Books has dabbled on the darker side of Holmes with several of their titles, for example. And in 2017, Eliminate the Impossible; Part VII in the MX Books of New Sherlock Holmes Stories series (you know: the one I’m contributing to) tackles the supernatural. But this post should give you some starters to your Holmes for Halloween reading.

Happy Halloween, Bob. I’m even less a fan of horror than you are, but I have read some Holmsish scary stuff, though none of those you show and my memory is keeping the specifics at bay.

I look forward to your Monday posts, keep ’em up.

R.K – I know there is some good horror writing out there: Robert R. McCammon is simply amazing. But for the most part, that stuff just gives me the willies and I’m glad when I’m done reading it. Even some of Robert E. Howard’s works make me shudder. So, it’s just not for me.

Within the Holmes milieu, the supernatural stuff can be low on the horror scale, so I usually fare better with those stories. I think David Stuart Davies’ ‘The Tangled Skein’ was a sequel to ‘The Hound of the Baskervilles,’ with Dracula in the mix. That’s certainly in the creepy category!

They haven’t booted me yet, so thanks for continuing to come back on Monday mornings!
(and I fixed “saw” on that other comment)

[…] To get into the spirit of things, today over at BlackGate.com, I’ve got  post with some recommended creepy Holmes stories to celebrate the day. I’m […]

Which particular McCammon books? Usher’s Passing? I haven’t read it but the synopsis is very intriguing.

Zhern – Boy’s Life is superb. I also really liked Swan Song, Usher’s Passing, They Thirst, Wolf’s Hour, Bethany’s Sin..just about all of the horror stuff, really. I haven’t read the Matt Corbett books, but I intend to.

Thanks, Bob. I picked up Usher’s Passing yesterday and will eventually pick up more. The Matthew Corbett series sounds good also. Too much to read, too little time.

“too much to read, too little time.”

I can’t wait until I’m retired and can fill up my day reading and writing. This job is constantly in the way!

I finished Usher’s Passing last night. I really enjoyed it but it left me wanting more in the way of Usher backstory. I’ll have to check out the others you mentioned above.

Thanks for the recommendation!