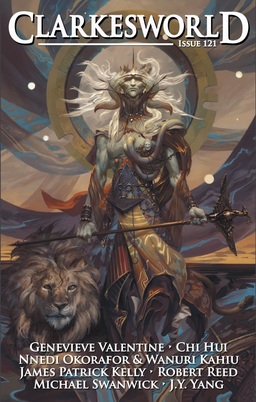 Okay, I’ve settled into a routine now. I drop by Charles Payseur’s Quick Sip Reviews to see what he thinks of this month’s crop of magazines, read what he has to say about Clarkesworld, and then make a beeline to the Clarkesworld website. The guy knows how to whet your appetite for good fiction.

Here he is on Genevieve Valentine’s 9,000-word tale, “Everyone from Themis Sends Letters Home.”

So this is a rather heartbreaking story about a place that doesn’t even exist. Not exactly. It’s about a woman who has been unfortunate all her life finally being a part of something that she loves, that makes her feel…okay, and then having to find out that it’s been not only a lie but a cruel one… It’s also about a game, a game that comes to be something more than that, mired in the horror of what it did but also in the good that came of it. The story is brilliantly told through letter, at first between Marie and a mysterious other person, then drawing out to include other people… The story does a terrific job of selling the idea of the game and then exploring how the game abused its test subject. How a corporation teamed with a prison to use people and how no one cared. The story flits from person to person but only through letters, so that the story is in some ways the evidence being gathered by the main character, by Benjamina, to turn over to expose what has happened. And it’s completely believable that such treatment of inmates would happen. It points to how we treat the incarcerated, how we treat those we’ve deemed criminal. How powerless they become and how easy they are to use, even when it leaves permanent damage. It’s a wrenching story and I love how it plays out, the guilt and the pain and the yearning. It uses form to great effect and you should definitely read this one. Go!

“The Next Scene” by Robert Reed
“One Sister, Two Sisters, Three” by James Patrick Kelly
“The Calculations of Artificials” by Chi Hui, translated by John Chu
“Everyone from Themis Sends Letters Home” by Genevieve Valentine
“Rusties” by Nnedi Okoafor and Wanuri Kahiu
“Old Domes” by Jy Yang (from We See a Different Frontier, 2013)
“The Very Pulse of the Machine” by Michael Swanwick (from Asimov’s Science Fiction, February 1998)

Méliès to Bonestell: Relevancy and Realism in Cinematic Science Fiction by Mark Cole
Jazz Music and Greek Myths: A Conversation with Peter S. Beagle by Chris Urie
Another Word: The Ship’s Voice: A Risk Analysis and Modest Proposal by Fran Wilde
Editor’s Desk: A Decade by Neil Clarke

There is one podcasts (so far):

“The Next Scene” by Robert Reed, read by Kate Baker

The cover this issue, “Samyaza, Angel of Pride,” is by Peter Mohrbacher.

We last covered Clarkesworld with Issue 120.

Our October Magazine Rack is here. See all of our recent fantasy magazine coverage here.