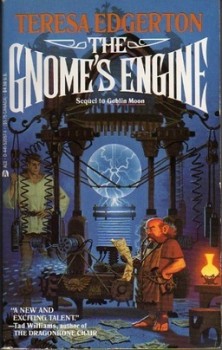 Hobgoblin Night (2015) is an e-book rerelease (and revision, and repackaging, along with three previously published short stories) of The Gnome’s Engine (1991), Teresa Edgerton’s charming follow-up to Goblin Moon (1991). In it, the adventures of brave Sera Vorder and dashing Francis Skelbrooke, and the evil machinations of the faerie-human hybrid, the Duchess of Zar-Wildungen, continue.

In my Black Gate review of Goblin Moon, I wrote,

Goblin Moon is a model of what light entertainment can be. It’s not going to change your world, but it will definitely bring a smile to the face of anyone with a taste for some swashbuckling and Gothic mystery. This tale, smelling just a little of lavender and gunpowder, is a fun respite from all the bloody, cynical “realism” permeating much of modern fantasy — come to think of it, much of modern life.

Those words hold true for Hobgoblin Night, as well. There’s a little less swashbuckling and a little more Gothic mystery in this volume, but it’s just as much outright fun as its predecessor. If you have any desire to visit a world suspiciously like Europe during the Enlightenment, but with Gnomes, Fairies, Trolls, magic, and alchemy, these two books are for you.

At the end of Goblin Moon Sera, her cousin Elsie, and Jed Braun were headed off over the Alantick Ocean to the hoped-for safety of the New World. Though they had thwarted the Duchess’ evil plan to wreak dire harm on Elsie as revenge for a slight perpetrated by Elsie’s mother, they hadn’t stifled her desire for satisfaction. By stealing an ancient, mysterious parchment from the Duchess before fleeing, they had, in fact, only enraged her more.

The New World continent of Calliope is a place of small towns and trading ports. So while the human, Dwarf, and Gnome settlers have managed to recreate the society of their homeland to a certain degree, it’s still a frontier land, making it fairly easy for Sera and her companions to hide out under assumed names. Sera and Elsie have found refuge in the house of Mr. Bullrush, the mayor of Lootie Bay; Jed, in order to continue his studies of esoteric lore, has gone to work for Mr. Jonas, a Gnome member of the semi-secret Glassmakers Lodge.

Back in Euterpe, the Duchess has sent an army of spies out in search of Sera and Elsie. She has also kept Francis Skelbrooke under constant observation. Skelbrooke, careful not to lead the Duchess to his beloved Sera, has remained in Euterpe, continuing to lead a life of secrecy and danger. Eventually one of her spies discovers the whereabouts of the Duchess’ quarry, and she embarks on a journey across the Alantick. Skelbrooke promptly learns the Duchess has left Euterpe for Calliope, and books his own passage to the New World.

While the main narrative of Hobgoblin Moon does concern the Duchess’ hunt for Sera and Elsie, much of the book is composed of side plots. Oftentimes, I have been known to rant about the superfluousness of digressions in books (particularly in giant doorstopper series), but here they are charming; serving to show off the various lands and peoples of Edgerton’s imagination, and to tie up loose ends left over from Goblin Moon.

The most significant of these side plots is Jed and Mr. Jonas’s construction of the titular Gnome’s Engine.

Sera sat down on the chair Jed offered her, sweeping an eager glance around the room. She had never been in Mr. Jonas’s inner sanctum before, and she was naturally curious. Low shelves lined the room, crammed with books and papers and all manner of queer instruments which (alchemist granddaughter though she was) Sera did not recognize. In the center of the room stood a great engine made of brass and blued steel: a complex thing of gears and pulleys and weights and pendulums; Sera could make neither head nor tail of it, though she remembered that Jed had said something about experiments with perpetual motion. A number of faded maps and diagrams were pinned to the plaster walls above the shelves, and a chart of the heavens had been painted on the ceiling. 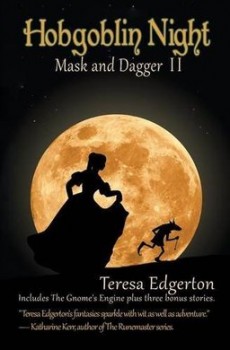 With it, they intend to raise part of the continent of Panterra, an ancient land long lost under the waves of the Alantick Ocean. Encouragement in their endeavors comes from the surprising revelation of the secrets of the Duchess’ parchment: a map of Panterra in relationship to Euterpe and Calliope.

Sera and Elsie have their own adventures in the New World. When Jed and Mr. Jonas move their project to Hobb’s Church, they take jobs as instructors at Mothgreen Academy. A school for young girls, it is operated by Miss Jamaica Barebones, and seems to be haunted by the ghost of her late uncle, the scholar Izrael Barebones.

Also, the town is being undermined by the digging activities of the subterranean hobgoblins. While not dangerous like the goblins of Euterpe, the hobs’ excavations are in danger of destabilizing all the buildings of Hobb’s Church. When she saves the life of a young hobgoblin, Sera finds herself in the middle of the ongoing fight amongst the townspeople about whether the underground menaces should simply be exterminated.

Sera remains the kindhearted, self-sufficient, and tough character she was in Goblin Night. More than the foppish, air-affecting Skelbrooke, she is the heart of the book. When others are losing their heads to romantic notions, Sera remains strong and cautious. Her reaction to hearing Mothgreen Academy is haunted is typical of her no nonsense approach to life:

“Stuff and nonsense!” sniffed Sera, though her skin crawled and the hair at the back of her neck stood up just the same. She had far more experience of ghosts than she cared to admit. She did not believe in spectres because she would not — past encounters to the contrary. Why, the existence of spirits would be an offense against Reason, a violation of every sensible, orderly principle that Sera held dear. She was not about to encourage the ramshackle creatures by allowing them a speck of credence!

Through Skelbrooke’s adventures Edgerton explores the Exalted and Equable Republic of Zammarco, an obvious simulacrum of Venice at its most Gothic and decadent. Under the alias Simon Blood, Skelbrooke has ventured to the city of canals in search of the notorious white slaver, Count Azimet. While still a reckless adventurer — a mix of avenging angel and drug-addicted dandy — he is striving to change. Almost shocked to find himself so in love with Sera, he is now a man bent on reformation.

Edgerton doesn’t neglect her dainty villainess. More than in the previous novel, we learn how her mind operates. For her, revenge is an elaborate thing with specific rules and requirements, as she explains to one of her associates:

“Gnomes believe in fair play, and so do fairies, be they Fee or Farisee, and a proper scheme of revenge in the grand fairy tradition must be as intricately crafted as a gnome’s trap.”

The Duchess began to do up her silvery-blonde hair. “My victims, you see, must participate in their own destruction. I may lure them in, trick them, even resort to coercion, but I cannot stoop to physical force. It isn’t enough to merely ruin them. No, I must outwit them as well, prove myself superior. In that way, I gain a moral advantage.”

With the Duchess’ travels, Edgerton explores another part of her intricately depicted world. Before leaving the Old World for the New, the Duchess ventures into the dangerous realm of the troll king, Skullgrimm.

The Troll King’s stronghold appeared in the distance, a dark and sullen pile, surrounded by a fence of iron pickets like the wall around a graveyard, though of far more imposing height. The Duchess and her party arrived at the gate just as the sun slipped below the horizon. A serving-troll appeared, dressed in baggy, knee-length breeches and an antiquated tunic with a wide, white collar. He opened the gate, and then closed it with a clatter behind them.

There was no chance of this one masquerading as a Man, mused the Duchess, eyeing the troll as her sledge swept through the gate. No chance of imposing on credulous humanity as Skogsrå had done successfully for so many years. Though he presented a manlike appearance from the waist up, the legs below the flaring breeches undeniably marked the gatekeeper as a troll: they were spindly and bristled, ending in a pair of slotted trotters. In addition, he sported a long tufted tail like a cow.

And, of course, there are the clothes. Every outfit, ensemble, costume is described in exquisite detail. Nearly every page of Hobgoblin Night is graced with descriptions of blouses, waistcoats, dresses, and hats made of every possible material and in more colors than most of us can imagine.

When Skelbrooke accompanies Sera to church, she feels “dowdy and countrified, in her cherry-striped poplin and second best bonnet” when he shows up…

in a suit of primrose satin, with a malacca walking stick carried in one hand, and a tricorn hat with a feather panache. His hair was immaculately powdered, he was delicately scented with bergamot and neroli. 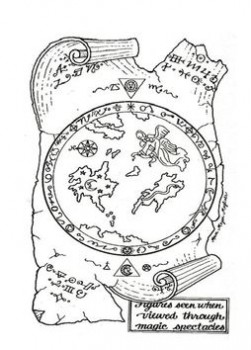 Mr. Jonas dresses in good gnome fashion, wearing “dark colors, with a tall stove-pipe hat cunningly designed to fit over his horns when he went out.” Venturing into the cold troll lands, the Duchess protects herself with “a mantle of crimson velvet and a swansdown hood.” There are ribbons of emerald and primrose, and gowns the color of straw. Whatever else, no reader will have any trouble picturing exactly how Edgerton’s characters are supposed to appear. The abundance of color and texture gives a real tactile dimension to the book.

Eventually, all the various and seemingly unrelated storylines come together in one concluding sequence at an ancient temple raised from beneath the ocean. Disappointingly, though, the end of Hobgoblin Night feels insufficient, as major strands are left unresolved. While there is a showdown between Sera, her friends, and the Duchess, I felt slightly abandoned by the author at the end. It doesn’t feel like there should be a sequel (though I would not deny my desire to take another trip to Calliope and Euterpe), but it’s all more than a little anticlimactic.

Nonetheless, Hobgoblin Night is a book I strongly recommend. You do need to have read Goblin Moon to appreciate it, but based on my review two summers ago, you’ve read that already. Right? There are so many things this review leaves out; character and plots, wondrous sights, and such. You will have to discover them for yourself when you finally crack open the book’s cover.  Seriously, though, this is a sadly underappreciated duology that really deserves any and all attention I can get it. Read it.