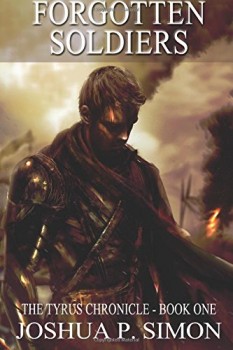 Forgotten Soldiers is the story of Tyrus, a sergeant in the Turine army. Turine has been at war with the Geneshan Empire for over a decade, and the war is almost over, the Empire on the defensive. Tyrus’s tactical skill and magic resistance make him a highly valued asset, and he is sent, along with his well-trained unit and powerful mage sister, on the critical mission of recovering a magical artifact, an ancient superweapon in the hands of the Geneshans. He succeeds, and the Geneshans immediately surrender. It turns out the Geneshans are even more afraid of the artifact than the Turines are, and the only condition of their surrender is that the Turines not use the artifact. Tyrus and what remains of his unit are discharged.

Their reception is not quite as warm as they anticipated. Many people have heard rumors of what the army has been up to, and it’s not pretty. People regard the soldiers with suspicion, refuse to do business with them, and there is even an attack by a mob at the first town they visit. When Tyrus and his friends are forced to defend themselves, the situation becomes worse and they have to leave town in a hurry, every soldier hoping that they’ll at least be welcomed back in their hometowns.

For Tyrus and his friends, that’s not to be. Tyrus returns to find himself presumed dead, and his family in dire straits. The town has changed, consisting mostly of newcomers hostile to him, and even his old friends are either suspicious of him themselves or too afraid of the current climate to help. It’s up to him to rescue his son and daughter, Zadok and Myra, from indentured servitude and try to find a place for his family.

It’s said that every book reflects the concerns of the time when it’s written, regardless of its setting. And it’s true that the people’s attitude toward the soldiers feels more modern than pre-industrial, with a focus on distant war crimes against foreigners rather than concerns about the uncouth, rowdy warriors bullying and cheating the townsmen. But I can certainly see how a country that’s mostly had peace, even in the midst of war, might react badly to the return of a large body of able-bodied men trained for violence and unlikely to be happy about the changes at home that have left them behind.

Of course, everything changes when someone decides to actually use the superweapon.

At its heart, Forgotten Soldiers is a drama about a man returning home. The weight of its story rests on the solitary viewpoint of Tyrus. Fortunately, Tyrus works as a character. He’s honorable and caring toward his family and comrades, but he’s far from perfect. He did things he’s not proud of during the war, though the details are never made clear, and while he cares for his own, he can be ruthless in his defense of them, and unforgiving of wrongs. It takes his children and his comrades, especially the brothers Dekar and Ira, to bring out the best in him.

Much of the plot relied on everyone thinking Tyrus had died five years ago. The basis of this was an order preventing the soldiers from communicating with home. This seemed contrived to me, and I wish the author had presented a more plausible explanation. While armies could reasonably be deployed for long periods of time, a five-year blackout in communications seems more likely to result in a mutiny, or at least an underground market for couriers, than compliance. Especially since it was apparently a cost-saving measure rather than a matter of operational security.

While a lot happens in this novel, it doesn’t really feel like enough. That’s largely because this is a transitional novel, as one story—the war—is ending, and another, the artifact, is beginning. I could be more understanding if this were in fact a novel in the middle of a series, but as the first novel in the series, I felt that it needed to do more to start the story arc—the use of the artifact would have fit better somewhere around a third of the way in, rather than at three-quarters, with the book ending just as we’re waiting for the other shoe to drop.

The advantage is that you know that there’s a lot more of the story to tell, and the next two books are currently available. But I still felt this book should have gotten us farther into the core story and showing us the stakes and the threat, rather than barely starting.