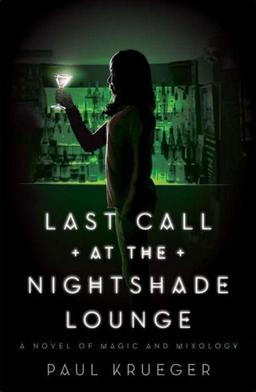 Yes, alright – you already knew that in a metaphorical sort of way. But as we will all soon learn from native Chicago author Paul Krueger, bartenders are also very magical in a literal way.

Or at least they are here in Chi-town.

Krueger’s debut novel, Last Call at the Nightshade Lounge is about a secret society of bartenders who fight demons with alcohol-magic, which is something most of us had a feeling was probably true, but usually around 2 a.m when we start thinking to confirm our hunch, the ability to do so is pretty much beyond our reach.

No need to worry though, Krueger is about to clear it all up for us.

College grad Bailey Chen has the typical, Midwestern, twenty-something issues: no job, no parental support, and a rocky relationship with Zane, the only friend who’s around when she moves back home. But Bailey’s issues are about to get a lot less classic.

It turns out supernatural creatures are stalking the streets of Chicago, and they can be hunted only with the help of magically mixed cocktails: vodka grants super-strength, whiskey offers the power of telekinesis and tequila gives its drinker fiery blasts of elemental energy.

But when Zane introduces Bailey to his cadre of monster-fighting bartenders, it’s soon up to her and the ragtag band of magical mixologists to take on whatever — or whoever — is behind the mysterious rash of gruesome deaths in Chicago, and complete the lost recipes of an ancient tome of cocktail lore.

If that isn’t cool enough, Last Call at the Nightshade Lounge includes 13 actual cocktail recipes from the said ancient book, which you can mix up at home (for defensive purposes only of course). They have names like The Negroni: A Cocktail to Fortify the Flesh, and The Chimayo: A Libation to Extend Consciousness’s Reach.

Dead useful if you ask me.

Called “a sharp and funny urban fantasy is perfect for fans of Buffy the Vampire Slayer, Scott Pilgrim vs.The World, and adult readers of Harry Potter,” Last Call at the Nightshade Lounge is also a fast-paced thriller sure to quench your grown-up thirst. It’s available for preorder ahead of it June 7 release date.

And for the interest of our local Chicago readers, the book states The Nightshade Lounge is in Ravenswood, south of the 20th precinct police district. Triangulating from the nearest bus stop mentioned in the story, my guess is that The Nightshade Lounge is really a dive bar on Western Ave. call The Sunnyside Tap, which makes perfect sense when you think about it. Plus, one of the reviewers on Yelp called Sunnyside “the place where fun goes to die” which also seemed confirm it was the drinking establishment in question.

Stay tuned while I cyber-stalk Paul Krueger for confirmation.

And pre-order the book while you wait – I thought it was sheer monster-slash-alcohol-fueled fun.

That is a brilliant premise. I suppose in that universe, Rachel Maddow’s occasional mixology segments would be secret signaling about national demonic threats.

Sarah, believe it or not, I know precisely to which you refer. Mr. Goth Chick is mad for Rachel and now that you mention it, she is most definitely trying to tell us something… I can’t believe I didn’t recognize it before but as always, thanks for having my back…

With her Friday Night News Dump segments, she’s trying to saturate the country with her little commemorative cocktail shakers. I’d love to see her show up in this series.