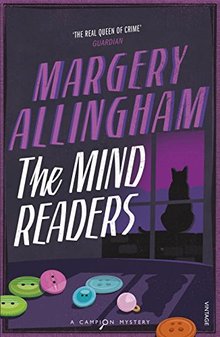 Lately I’ve been looking at SF-like inventions or discoveries that turn up in crime/mystery novels, first with John D. MacDonald‘s The Girl, the Gold Watch and Everything, and then with a variation on that same invention in an SF mystery, Spider Robinson‘s Kill the Editor/Lady Slings the Booze. This put me in mind of another example of mystery meets SF in Margery Allingham’s The Mind Readers (1965).

Allingham (1904-1966) is considered one of the mystery writers of the British Golden Age, along with Christie, Sayers, and their ilk, and her earlier novels certainly have a touch of that Jazz Age charm.

At first glance Albert Campion seems to be another variation on the gentleman sleuth with a friend on the force, a la Sayer’s Lord Peter Wimsey. The reader is given clear hints from time to time that he’s probably a younger son of a noble family, like Wimsey, but we never see Albert in family situations. He doesn’t live like a rich man, or a rich man’s son, and while it’s also pretty clear that “Albert Campion” is a pseudonym, we never learn his real name. Instead of the traditional English manservant, Albert employs Lugg, a former cat-burglar who’s lost his figure. Their relationship provides a great deal of the humour in the novels, but these books aren’t written for laughs. The characters may not take themselves very seriously, but they are serious about their work. 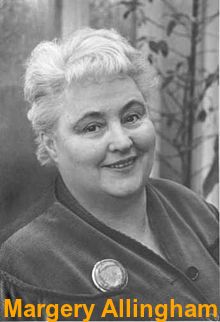 Even in Allingham’s early books there was frequently an element of thriller, in that the plot concerns a danger to be overcome rather than, or as well as, a murder to be solved. This was particularly true in the later books written as the second world war loomed.

While there is a murder in The Mind Readers – in fact there are a couple – the main thrust of the plot concerns the discovery of a device which enables people to read minds. Various security agencies, including one that  Albert worked for during WWII, scramble to get hold of the device, and to find the person, or persons, responsible for it.

Most interesting from the point of view of SF readers is how the science – and scientific discovery – is presented with both the “sense of wonder” we’re familiar with from early golden age SF, as well as the foreboding that we’re more familiar with now. One of the related concepts examined repeatedly in the novel is intriguing because many of us have experienced it first hand: that when new technologies arise, the people who understand and use them best are the ones who grew up with them. We tend to think of this as something that happened with the rise of the home computer, but Allingham shows us that this “youngsters get it, oldsters don’t” probably goes back to the dawn of technology: “doubtless now, as in the past, the story would be the same. With the equipment would come the personnel.”

Even the suggestion that mind reading would put an end to privacy as we understand it is familiar to the modern ready, though it’s a worry we usually associate with the internet, and social media. In fact, on re-reading Allingham’s novel, I was, more than anything else, reminded of Alfred Bester’s The Demolished Man (1951), and I wondered if Allingham had ever read it.

As a novel, The Mind Readers is not as charming, nor even as suspenseful, as some of Albert Campion’s earlier adventures. In a way, however, it’s very modern, with the feeling that the characters are out of their depth making the work reminiscent of John le Carre’s fiction. The characters are aware that no one really knows what’s going on, and that things are not in their control. There’s also a quality of breathlessness, as if time is running out, or as if Allingham was rushing to finish. Or perhaps she was creating in the reader the characters’ own  feelings?

There’s another connection between Albert Campion and SF readers/viewers that we should be aware of: Peter Davison, best known to us as (one of the) Dr. Who, has also played Albert Campion in the BBC Mystery Series.

And on final note, a “campion” is a small wildflower, as is a “pimpernel.”

My wonderful mother-in-law had a huge collection of mystery paperbacks. When she died, my father-in-law wanted to send them to people who loved mysteries as much as she had, so they ended up with my mother and sister, who have been trading them back and forth in a book club of two for the past several years. They started with Allingham (alphabetical order, you know), and eight years later I think they’re still somewhere in C. Allingham’s the find they still talk about, the best new-to-them author so far. I wonder if they’ve got this title.