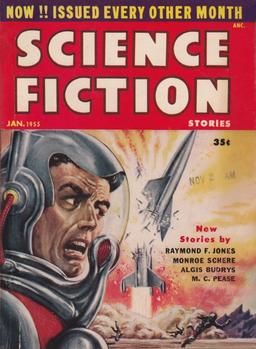 Much has been made, justifiably, of Robert A. W. Lowndes’ habit of making bricks without straw over decades with Columbia Publications’ magazines, mostly Future and Science Fiction Stories. He fought tiny budgets and ridiculously irregular publication schedules to produce credible issues time after time.

This issue appeared during a fairly prolific time for the magazines, though. Science Fiction Stories was now bimonthly, and, shockingly enough, 6 issues did appear in 1955. For that matter, 4 more issues of Science Fiction Quarterly also appeared. Only one issue of Future, but that makes 11 issues total for Lowndes that year — almost as many as John W. Campbell!

This issue of Science Fiction Stories is light on features — only one is listed, “Voyage to Nowhere,” by Wallace West, but Lowndes notes “Twenty years ago, this would have been presented to readers as a story.” Not to put too fine a point on it, but 60 years later, I still say it’s a story, and I’m not quite sure why Lowndes wants to call it “a speculative essay.” So I’ll list it with the fiction.

The cover is by Ed Emshwiller, not too typical of his best work (and not illustrating any of the stories). Interiors are by Emsh, Freas, and Orban.

Lots of “Little Known Writers” this week. Let’s start with them. Monroe Schere is an interesting case. Apparently his real name was Moses Schere, and his first SF story appeared in Hugo Gernsback’s Air Wonder Stories in 1930. Schere ended up publishing 9 stories, some as by “M. Schere,” some as by “Monroe Schere,” and some under his real name. The last of these was “Inherit the Earth.” Amazon has listings for three books by “Monroe Schere,” one thriller and a couple of popular science books. Not sure if that’s the same guy.

“Inherit the Earth” is distinctly old-fashioned, and yet also a ‘50s-ish tale, being about the aftermath of nuclear war. A couple of Martians arrive at a devastated Earth. We soon realize they are humans as well, adapted, not very successfully, to live on Mars, where they are dying out. They encounter to their surprise some more humans — these have adapted to live in the sea. The story asks whether it is better to continue to try to survive on Mars, or to admit that the sea-dwellers are the true inheritors of Earth.

Garda Jamieson is even less known. This was her only story, as far as I can tell, and indeed this story is all Google knows of her. It’s an open question, I suppose, as to whether this might be a pseudonym, but I suspect it truly is a one-off sale. “The Next Time” is a short piece, and pretty decent, about a rich man with a useless son who plans for his “rebirth,” an expensive procedure by which he’ll get a new body — a child, whom he plans to require his son to raise. He also plans to show his son what fun it is to raise a child!

Dennis Wiegand is the third LKW in this issue. He published three stories in the SF magazines in 1954/1955, one in Astounding and two in Lowndes’ magazines. He also had a story in Ellery Queen’s Mystery Magazine in 1954. He may have been the Dennis Wiegand who was a prominent member of some Veterans’ committees. “It Should Happen to a Dog” is a somewhat convoluted and strained story of the conflict between a straitlaced planet (Virtue Triumphant) and its nearest neighbor, a somewhat disorganized planet called Dog, with a Las Vegas-like port. VT tries to attack Dog, but is foiled by the lack of centralization of that planet, and by the mild efforts of the one man they sent to Dog, who went native I guess. Kind of second-rate Eric Frank Russell — or third-rate, really — not dreadful but not terribly interesting.

The Wallace West piece, be it short story or “speculative essay,” “Voyage to Nowhere” is an attempt (that I think failed) at an amusing time travel story, about two drunkard scientists who invent a time machine, and fail to properly consider the implications of time travel when you consider the concomitant movement in space. Some good, if hardly original, ideas, but some that I thought were just silly.

The other short story is by a much better known writer, to say the least, Algis Budrys. “The Two Sharp Edges” comes early in his career, but it is serious and ambitious and real-seeming in a way these other stories just aren’t. That said, it comes just short of the real wow factor… it’s a good story, not great one. It tells of a soldier who has been granted the right to an abandoned farm after a devastating war. He restores it to productivity, and then one night a man and his sons visit… they’re clearly down on their luck. It turns out — no surprise — that they were the former owners; but were on the losing side. The story turns on the conversation between the soldier and the former owner, which turns again on this man’s particular secret. There’s no violence nor bitterness, just a sadness at what war does, and another sadness, about home and the loss of home. 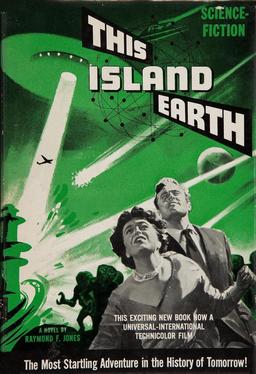 The opening novelet is by Raymond F. Jones, who had a long career in the field (first story published in 1941, last in 1978), but who never really became prominent. He did publish some stories that garnered attention, perhaps these days most notably the novel This Island Earth, which became a movie. “The Gift of the Gods” is a noticeably dark story — an alien spaceship crashes in the Atlantic, and the US recovers it, but is pressured to allow equal access to the Russians and to other countries. Physicist Clark Jackson is recruited to be part of the US scientific team, partly because one of his college classmates is the General in charge. Problem is, Jackson hates the General, because he blames him for stealing the only girl he ever got up the courage to ask out. And Jackson also hates the General’s views: he wants the alien tech for weapons development, and he also wants to keep all that knowledge from the other nations. Jackson soon realizes that this attitude is held by all the other investigators, and finds himself eventually allied with the horrified alien representative. The conclusion is cynical and dark. It’s to some extent an interesting effort, but it doesn’t really work: it’s a bit overblown and unconvincing — in particular, the characters come off as cardboard types.

M. C. Pease published about 20 stories between 1949 and 1957, then fell silent. Apparently he kept writing, without success: at any rate I have seen a report (second-hand, or third hand actually) from a former F&SF slushreader of a story from Pease as late as the early ’70s. Pease’s main market was Astounding, and secondarily Lowndes’ magazines. I have read several Pease stories, and have found them mostly interesting failures — the ideas are sometimes intriguing and original, but the execution tends to fall short.

So, who was Pease, really? Biographical details were hard to come by. So I solicited the help of an email list I subscribe to, full of experts on short fiction in magazines, especially SF. And we did some digging, and came up with Marshall Carleton Pease III (1920-2001). He had a B. A. from Yale in Chemistry, and an M. A. from Princeton, and eventually a Ph. D., I’m not sure from where. Though his degrees were in Chemistry, his work was in electronics, beginning with radar countermeasures and ending up working at SRI in Computer Science, particularly early research into parallel processing: interesting stuff (to me, anyway, as that’s my field). He published lots of scientific papers and at least one textbook. His father was a prominent pediatrician. The really cool detail is what links this M. C. Pease to the SF writer — a letter from John W. Campbell to Isaac Asimov, suggesting he write a story about an idea that Pease had had but felt he couldn’t do justice to. Asimov never wrote the story, but Campbell’s letter mentions that Pease was at Sylvania at that time (late ’50s), as was Marshall C. Pease the Yale/Princeton grad.

“Ripeness” is not one of Pease’s best stories, though it still shows ambition. Philip Reynolds is in charge of a computer that has allowed a dictator to control the world — and Reynolds has allowed this, seeing it, at the beginning, as the only way to help the world out of chaos. But the dictator’s rule is getting harsher and harsher, and Reynolds is pushed to consider rebelling when his brother, an opponent of the dictator, is arrested and likely to be executed. It’s a bit talky, and the computer bits are totally implausible, but it does try for moral seriousness, if in the end not quite selling its resolution.

Rich Horton’s last article for us was The Hugo Nominations, 2016; or, Sigh …. See all of his BG reviews here.