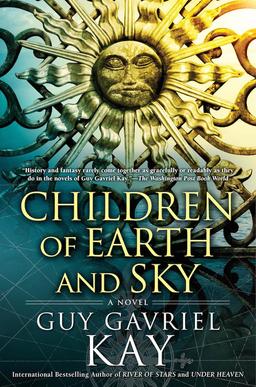 I remember when Guy Gavriel Kay’s three volume Fionavar Tapestry appeared in my native Canada in the mid-80s. It was an instant hit, and put Kay on the map as a major fantasist immediately (to understand why, see Fletcher Vredenburgh’s retrospective of the first two volumes, The Summer Tree and The Wandering Fire). He followed with Tigana (1990), A Song for Arbonne (1992), The Lions of al-Rassan (1995), and The Sarantine Mosaic (Sailing to Sarantium and Lord of Emperors). Kay isn’t particularly prolific, producing a new fantasy volume every three years or so. In his review of Kay’s 2010 novel Under Heaven, fellow Canadian Todd Ruthman wrote:

We don’t have that many rituals in our home. One is the creeping countdown to Guy Gavriel Kay’s newest novel. I am always a little sad when it finally comes, though, because it means years before I will see his next one.

There hasn’t been a new Kay novel since River of Stars (2013). It’s been three years, and along comes his newest, like clockwork. Children of Earth and Sky, a standalone fantasy set in a world inspired by Renaissance Europe, was released in hardcover on May 10, and called “Magnificent” by Library Journal.

From the small coastal town of Senjan, notorious for its pirates, a young woman sets out to find vengeance for her lost family. That same spring, from the wealthy city-state of Seressa, famous for its canals and lagoon, come two very different people: a young artist traveling to the dangerous east to paint the grand khalif at his request — and possibly to do more — and a fiercely intelligent, angry woman, posing as a doctor’s wife, but sent by Seressa as a spy.

The trading ship that carries them is commanded by the accomplished younger son of a merchant family, ambivalent about the life he’s been born to live. And farther east a boy trains to become a soldier in the elite infantry of the khalif — to win glory in the war everyone knows is coming. As these lives entwine, their fates — and those of many others — will hang in the balance, when the khalif sends out his massive army to take the great fortress that is the gateway to the western world…