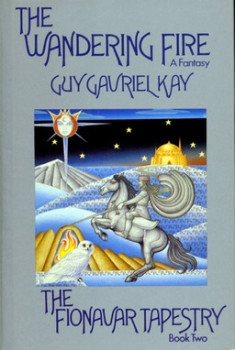 When I set out to delve into epic high fantasy late last year, I deliberately chose some stories I’d read already and remember liking. Rereading The Summer Tree, first volume of Guy Gavriel Kay’s The Fionavar Tapestry, justified my fond memories of it. I ended my review stating: “This is how epic high fantasy can look if it doesn’t want to merely ape LotR or regurgitate the same bits and pieces over and over again.” Those words do not apply to the second book, The Wandering Fire (1986).

Upon finishing the second volume I remembered that, when I read it the first time, I didn’t rush to read the concluding book, The Darkest Road. In fact, it was several years before I picked it up. It won’t be so long this time, but I sure don’t feel like reading it tomorrow.

In The Summer Tree, five Canadian grad students were magically transported from Toronto to Fionavar, the primary universe. Over the course of the novel, they were transformed spiritually and, some of them, even physically. Dave Martyniuk became Davor, adopted member of the nomadic Dalrei, and keeper of the horn that unleashes the Wild Hunt. Kimberly Ford became the Seer, able to manipulate certain magics and see the future. More drastically, Paul Schaefer, distraught over the death of his girlfriend a year earlier, sacrificed himself on the Summer Tree to summon, and become a conduit for, the god Mornir. Jennifer Lowell was kidnapped and raped by Rakoth Maugrim, Fionavar’s dark lord. Only happy-go-lucky Kevin Laine seemed to escape unchanged, yet Fionavar was stimulating his natural mournful romantic tendencies to some unseen end.

While The Wandering Fire purports to move the group deeper into the heart of the growing fight against Maugrim, what was once exciting and focused now feels hurried and slapdash. Momentous events come and go in the space of a few paragraphs. In one case a major secret is discovered but so little time was invested in it beforehand, it seems tossed off and rather inconsequential instead of horrifying, as intended. 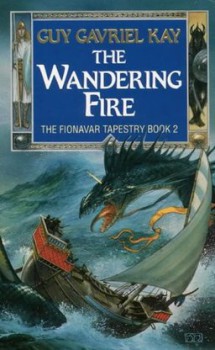 Despite moments of great power and beauty, Kay seems to have been determined to ram every last bit of mythic archetype into The Wandering Fire. While the first book was similarly chockablock, he managed to evince more control and balance. Now that the students have been transformed into mythical stand-ins themselves, it’s like all bets are off and there’s no restraint.

We get lots more Sky Father and Earth Mother appearances. At a center of Goddess worship Attis and the boar are recreated and there’s a journey into a distinctly Freudian underground passageway. Elves and goblins are called by their Norse names, lios alfar and svart alfar. Other Celtic- and Norse-seeming names abound (why do only Northern European legends figure in a supposedly primary universe?).

You want the Wild Hunt? You got the Wild Hunt, in spades. Unbound by allegiance to Light or Dark it is truly wild, dealing death with abandon:

Into the phalanx of Avaia’s brood they flew, smoke on flying horses, shadowy death in the darkening sky, and nothing in the air could withstand them, and they killed. Dave saw Avaia leave her sons and daughters to their doom and flash away north in flight. He heard the wild laughter of the kings he had unleashed, and he saw them circle one by one over him and raise swords in salute.

Then the swans were all dead or flying away and the Hunt descended on Fionavar for the first time in so many thousand years. Galadan’s wolves were fleeing and the svart alfar and the urgach upon slaug, and Dave saw the shadowy kings wheel above them, killing at will, and there were tears pouring down his begrimed face.

Then he saw the Hunt split in two as four went with the child who had been Finn in wild, airborne pursuit of the army of the Dark. The other kings, and Owein was one of them, stay by Adein, and in the evening light they began to kill the lios and the Dalrei one by one.

And then there’s what I suspect might be a deal-breaker for many readers: King Arthur. Here he is the Condemned King, cursed, for his killing of the May Babies (a prophecy that a child born on May Day would destroy him prompted Arthur to round up all the noble babies born on that day and have them set asea, with Mordred alone surviving), to an eternal cycle of fighting for the Light and dying in battle. And it’s not just a token appearance. First Uther Pendragon’s spirit is summoned up at Stonehenge, then Arthur himself at Glastonbury Tor.

I’m a big King Arthur fan (see my reviews of The Great Captains and The Dragon Lord), so I appreciate a well-turned depiction of him, which Kay does here. While only onstage a little bit, Kay manages to create a moving portrait of a man so rent by remorse over his dark sin, he willingly gives himself over to endless punishment.

There was a sound: wind, sorrow, lost music. He had been young and afraid, the dead father had said — and the dead spoke truth or lay silent — Merlin’s prophecy had tolled a knell for the shining of the dream, and so he had ordered the children slain. Oh, how could one not weep? All the children, so that his incestuous, marring, foretold seed might not live to break the bright dream. Little more than a child himself he had been, but a thread had been entrusted to his name, and thus a world, and when the babies died…

When the babies died the Weaver had marked him down for a long unwinding doom. A cycle of war and expiation under many names, and in many worlds, that redress be made for the children and for love. 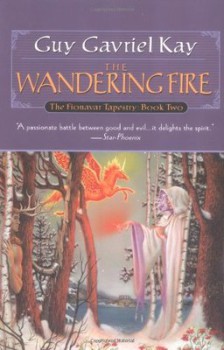 I like the introduction of Arthur. If our world is a reflection of Fionavar, then why shouldn’t our myths run backwards to roots in Fionavar? But it feels too much, a myth-step too far, as it were. It becomes a distraction, and it detracts from the actual story going on around him. Instead of the students or Fionavaran characters becoming more tangible, we’re treated to their reactions to him. (In one case that is important and well done but, again, feels extraneous).

It’s also a book where little happens. Great events, prepared for and alluded to over several chapters, transpire in a few pages, which imparts the hurried feeling I mentioned. Kay was determined the Fionavar Tapestry be a trilogy, which means you must have a middle book, but instead of serving as a true bridge between the first and final volumes, it’s a massive exercise in wheel-spinning. In the first book there was an endless summer, now we get an endless winter. A disguised princess again sneaks into a great gathering (the same princess). Nothing really moves the greater story of the war against Maugrim forward; instead several new players enter the arena, a few lesser villains are defeated, and only incremental movement is made.

Still… still, I don’t hate this book. Sentence for sentence, Kay’s writing is too good for that. Only his plotting and pacing are lackluster here. I perfectly understood her scarred mental state when he wrote that Jennifer felt she was “a creature of jarring angles and dislocated responses.” When Paul feels the spirit of Mornir moving within him it’s described as “a deep stirring, as of the sea.” And when Dave blows the horn to call out the hunt:

It was Light again, the sound, and the Dark could not hear it. Even so, they slowed in their advance. His head was tilted back as he blew. He saw Avaia watching him; saw her wheel suddenly aloft. He listened to the sound he made and it was not the same as before. Not moonlight on snow or water, nor sunrise, nor candles by a hearth. This was the noon sun flashing from a sword, it was the red light of a burning fire, it was the torches they had carried on the ride last night, it was the cold hard glitter of the stars.

Where The Wandering Fire works is in the individual scenes. The ceremony for the arrival of the king of Cathal in the kingdom of Brennin is described in wonderfully precise and gorgeous detail. The king sees it as “a tableau of such studied magnificence that no man alive could miss the import, and no man present, of either country, would fail to tell of it,” and I felt nearly the same way myself. But the prose is not enough to salvage a plot that goes nowhere and a narrative disrupted by awkward intrusions into the story.

The Wandering Fire is disappointing. After the majestic unfurling of The Summer Tree, the meagre offerings in this book left me feeling no great urgency to finish the trilogy (but my obligation to you, dear Black Gate readers, is overwhelming). It’s like a great hollow artifact painted in wonderfully and often brilliant colors, but with nothing of significance underneath. My fondness for the first book, and a desire to see how the conflict against Maugrim unfolds, will keep me on track to pick up The Darkest Road in a couple of weeks.