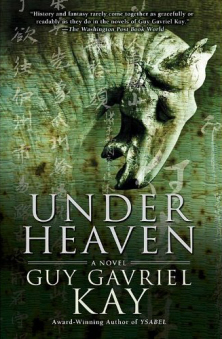 We don’t have that many rituals in our home. One is the creeping countdown to Guy Gavriel Kay’s newest novel. I am always a little sad when it finally comes, though, because it means years before I will see his next one.

If you liked Tigana or The Sarantine Mosaic, you will like Under Heaven. If you have not read Kay before, then do. But don’t start with Under Heaven. It’s one of his best, but you’ll want to save it for last.

Start with Tigana, then maybe A Song for Arbonne and The Lions of Al-Rassan. Jump to The Last Light of the Sun (or skip it entirely) and then go back for the two volume The Sarantine Mosaic (his second best). Then, and only then, should you read Under Heaven*.

Kay’s efforts have definitely improved with time.  A big part of that is no two stories are  in the same place, or use the same characters. I recently whipped through Jim Butchers’ twelfth Dresden installment, and am eager to read the upcoming sixth Temeraire dragon novel by Naomi Novik. Both series are fun, likely lucrative, and the authors pump out new adventures every year or two. But I sometimes wonder if they and other fantasy series novelists are a little jealous of GGK’s apparent freedom to always work on new ideas.

While much of Kay’s fantasy is set in or around lightly disguised historical Europe, it’s always in a different region. Characters from one novel do not migrate to the next with the change in setting**. Each story is fresh, the characters new. There is no shared history setting our expectations or restricting the players.

Such is the case with Under Heaven. Here Kay has moved even farther afield than usual. According to the jacket, it “evokes the dazzling Tang Dynasty of eight-century China.” I’m not a student of history, so I can’t speak to the accuracy of that historical reference***.

But Under Heaven is definitely evocative. The closing page of the Epilogue in particular is bittersweet. But maybe I’m just getting sentimental with age and a growing sense of mortality.

Under Heaven has all the right elements: honor, adventure, intrigue, romance, empire-spanning scope and a dollop of magic on the side. The novel follows the adventures of Shen Tai, the introspective second son of a famous general. Shen is seeking to honor the memory of his father by burying the long forgotten casualties of a border war when he receives both a visit from an old friend and a gift of staggering size from a foreign power. Both events are life changing and life threatening, and draw Shen and his family deep into the dangers of a crumbling dynasty.

Kay’s books always seem more of a shared journey through a captivating world than straight up sword and sorcery fare, an immersive role playing game rather than a first person shooter. It struck me after reading Under Heaven, remembering the snippets I could of his past works, that he often writes stories about Fifth Business.

Fifth Business is a muggle novel from the seventies by Robertson Davies. I don’t remember much of it, really, but was fascinated by the concept of “Fifth Business” as defined in the book’s opening pages:

“Those roles which, being neither those of Hero nor Heroine, Confidante nor Villain, but which were nonetheless essential to bring about the Recognition or the dénouement, were called the Fifth Business in drama and opera companies organized according to the old style; the player who acted these parts was often referred to as Fifth Business.”
– Tho. Overskou, Den Danske Skueplads

While Under Heaven’s Shen Tai, The Sarantine Mosiac’s Crispin and Kay’s other central characters are not strictly Fifth Business, they are protagonists swept up in tellings larger than themselves. They serve to provide a naive outsider’s view of empire-altering events, acting as confidants and sometimes catalysts for the major players. They do take an active role when they can, and try to change the outcomes. But I’m left with the distinct impression that the major events in Under Heaven and The Sarantine Mosaic would have transpired whether Shen Tai or Crispin participated or not.

But they do participate and so we get to share in the story too. And Kay’s stories are worth sharing.

*Completists will notice I did not mention The Fionavar Tapestry and Ysabel. I have not read the Fionavar trilogy, and Ysabel is a modern fantasy very different than the rest of Kay’s work.

** Let’s just ignore, again, The Fionavar Tapestry (a series) and Ysabel (which shares some of its characters), shall we?

*** But Kay does confirm it in the acknowledgements at the end of the book.