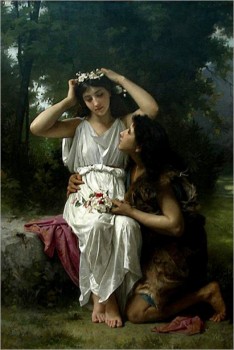 In my last post, I described one product of the Hellenistic period of ancient art as the invention of the novel. This surprised many people, who thought that the novel was an invention of a much later time. So of course, being an academic of leisure (she says as she ducks a flying juice box), I had to say more about it.

Some scholars do date the invention of the novel to the Modern period in Western Europe. I will display my ignorance and say I do not know why this is. Many books exist outside of English, outside of the Modern period, and in fact outside of the Western hemisphere that easily qualify as novels, so it is difficult for me to see this claim as much more than chauvinism. But if someone wants to correct me on this point, I am willing and eager to be enlightened. Or to fight you on it.

The first novel that we have comes from somewhere between the 2nd Century BCE and the 1st Century CE. It is a positively charming little book called Callirhoe, and it describes the travails of a beautiful young woman who marries her true love, an equally handsome young man named Chaereas. Shortly after their wedding, he kicks her in a fit of jealous rage and she dies.

At least that’s what everyone thinks. She has in fact been put into a coma, only to awaken when pirates invade her tomb. These pirates kidnap her and take her to Miletus to sell her at the slave market; she is then sold to a man named Dionysius. Callirhoe is so beautiful and virtuous that Dionysius falls in love with her as well, and asks her to marry him. She would refuse but she has discovered she is pregnant with her first husband’s child, and agrees to the marriage out of maternal devotion.

Meanwhile, back home, her tomb is found disturbed and empty, and Chaereas goes off to search for his wife. He is ALSO kidnapped by pirates and sold into slavery, and quickly distinguishes himself in battle. Our separated couple are both such outstanding examples of humanity that word of them reaches the King of the Persians, Artaxerxes, who demands that they separately come to his court. Once they catch sight of each other, a legal battle ensues over who Callirhoe’s true husband is, with Artaxerxes scheming to get her for himself.

Oh yeah, and there’s a war, and a lot of fantastic battles, and at last, Callirhoe is reunited with Chaereas and they live happily ever after.

Yes, this story’s happy ending involves getting back together with your would be murderer. Apparently bad life choices appearing romantic is not a new thing.

And they are really good reads. Seriously, pick one of them up in a good translation: you can find one here  for a reasonable price. It’s worth the time. Because they’re inventing an exciting idea here: the notion that you can write a long work, in prose, about ordinary people.

Well, they’re not quite ordinary. They possess god-like beauty, preternatural luck of both extremes, and outstanding virtue. But they are human. They’re not half god, they don’t have extraordinary magical abilities, and they don’t perform incredible feats of physical prowess. That is new, and it would change the way we think about storytelling forever.

Some of these Ancient Novels also involve Gay Romances.

I guess it depends on what qualifies as a novel. Did you define it in your last post?

[…] ADVANCED READING CODEX. At Black Gate, Elizabeth Cady argues “The Birth of the Novel” happened a thousand years earlier than some academics […]

Great post! I have only recently discovered — via this post and a Darrell Schweitzer article and another mention somewhere — the existence of these Classical novels — or fictions or romances or whatever you want to call them. They look like great fun.

(I just read a New Yorker article about Samuel Richardson, whose PAMELA is the canonical choice for “First English Novel”, hence “First Novel” by some definitions. Of course most find room for GENJI and QUIXOTE — to say nothing of the SATYRICON — ahead of Richardson. But there are definitions of novel — sillily restrictive ones — that do suggest Richardson as the first. Of course, they also eliminate an awful lot of contemporary books that everyone would call novels (includes most SF!))

(Richardson’s CLARISSA, by the way, is still apparently the longest novel in English (just under a million words), though that depends again on definition. If Anthony Powell’s incomparably great A DANCE TO THE MUSIC OF TIME is considered a single novel (as opposed to 12), it’s about the same length as CLARISSA.)