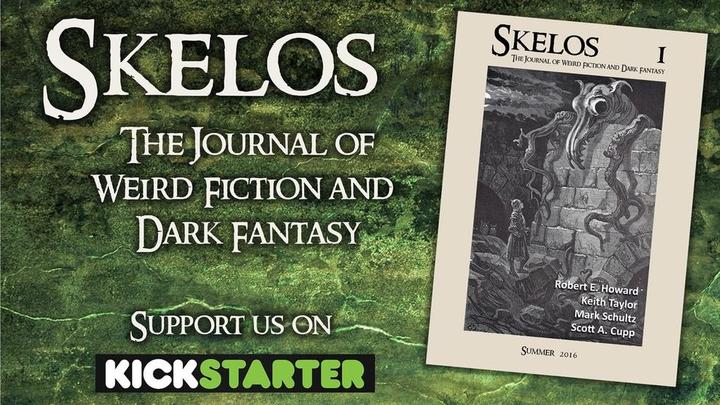 It’s always exciting to hear about the launch of a new fantasy magazine — and it’s especially exciting when it’s as promising as Skelos, a new journal of Weird Fiction and Dark Fantasy.

Skelos is edited by a trio of Weird Fiction rock stars — Jeffrey Shanks, co-editor of the fabulous Unique Legacy of Weird Tales, Mark Finn, noted blogger and author of the World Fantasy Award-nominated Blood and Thunder: The Life and Art of Robert E. Howard, and Chris Gruber, editor of Robert E. Howard’s Boxing Stories, from the University of Nebraska Press.

The Kickstarter campaign to fund the first issue is already at 150% of goal in barely 24 hours — which means that the first issue of Skelos will be arriving this summer. It will be packed with new fiction and great art, including a never-before-published fantasy piece by Robert E. Howard, illustrated by none other than Mark Schultz. Here’s the complete details.

The first issue of Skelos: The Journal of Weird Fiction and Dark Fantasy will feature a never-before-published fantasy piece by Robert E. Howard (Conan, Kull, Solomon Kane) illustrated by the legendary Mark Schultz (Xenozoic Tales, Coming of Conan, Prince Valiant). Also featured is a new sword and sorcery novelette by Keith Taylor (Bard series, Cormac Mac Art), a long-awaited sequel to his classic tale “Men from the Plain of Lir” originally published in Weird Tales. This story will be illustrated by the fantastic Tomás Giorello (Dark Horse King Conan). Another highlight of the issue will be a tale of dark fantasy from World Fantasy Award nominee and John W. Campbell Award nominee Scott A. Cupp…

I asked Jeffrey Shanks to tell Black Gate‘s readers a bit more about the magazine. Here’s what he shared with me.

We are very excited to finally bring this project to fruition. Our goal is to publish the kind of great fiction that we ourselves love to read: sword and sorcery, cosmic horror, dark fantasy, sword and planet, new weird, and similar genres. This is truly a labor of love and we are trying to do more than just publish a magazine — we want to build a community of like-minded writers, artists, scholars, and fans who share the same passion for this material that we do!

The Kickstarter campaign will run until June 10, and the first issue will begin shipping in late June, in both print and ebook editions. You can find more information on the Skelos Press Facebook page, or follow the project on Twitter @SkelosPress.

Check out the Kickstarter page here.

Man, I am looking forward to this. Know O Prince, indeed!

Normally I ignore stuff like this that use Robert E Howard to promote it but in this case Mark Finn and Chris Gruber have the credentials. Both have stood by REH and promoted his work and added to REH fans stock of quality products. Lovecraft is often used to promote things and then that same group turns to tear him down when it suits them. Howard was not a perfect man, he was a man of his time and I find the charges against him to be unjust.

“Never before published fantasy by REH”
Oh, tell me more. Where did this come from?
Will there be a juicy forward explanation in the mag?

“Never before published fantasy by REH”
Oh, tell me more.”

Interesting, this may be the first kickstarter I fund. I have to ask, is the name SKELOS not copyright? By whomever owns Conan rights?

“I have to ask, is the name SKELOS not copyright?”

Good question, but it appears to be an old (ancient?) Greek word, meaning “the leg (from the hip down).

Interesting AWA. I never thought to look it up, always just assumed it was a REH invention:

The whole hind limb of any vertebrate, consisting of the meros (thigh), crus (leg), and pes (foot): the antithesis is armus.

I suppose the book of femur or hind quarter just doesn’t resonate the same, ha ha.

This is the first Kickstarter event I have ever contributed to, but with the names attached to it, I had to go for it. Weird Tales was the birthplace of S&S, and I believe it will flourish in the pages of this new magazine. To me S&S works best in it’s original form; the short story/novelette!

26 days to go and the second issue is already unlocked. And they’ve added a lifetime subscription offer.

For the electronic version (that’s me), $25 for every issue they ever put out. There are some solid names behind this effort and I think you’ll absolutely get your money’s worth, whether you’re in for one issue or all of them.

A short update. Seeing as I pledged I have been receiving the updates. The magazine has unlocked all initial issues and has pretty much reached all stretch goals, I think they are just adding extra art. Checking out the different rewards, the gambler has to say the lifetime patron with lifetime shipping is the way to go. At USD100 plus USD30 postage (for me overseas) it makes huge economic sense. The key thus becomes if this can remain sustainable.

Another update. My hard copy arrived in good time bearing in mind international postage. It’s a lovely thick volume, not quite as big as a Black Gate but about as thick as the early ones.

Thanks Tiberius! My copy hasn’t arrived yet here in Chicago, but I hope it will soon.

Let us know what you think of the contents.