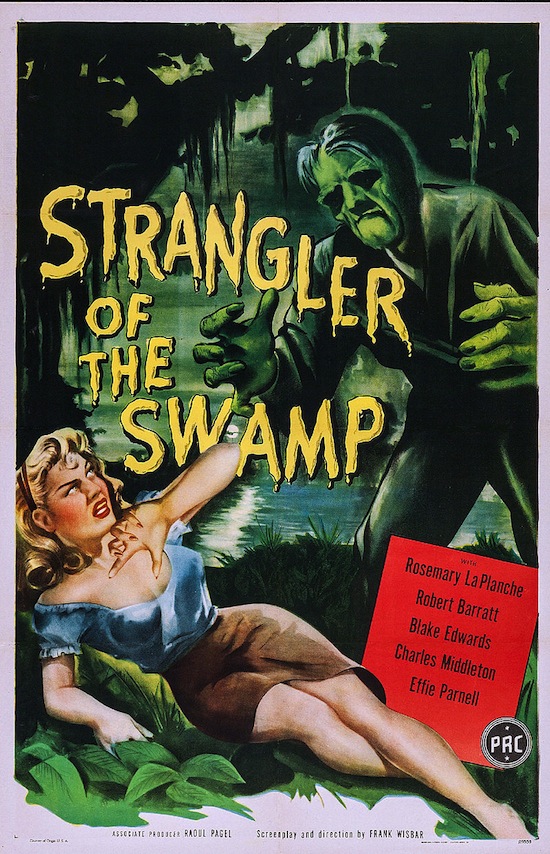 One of the lowest-budget Poverty Row houses was PRC, Producers Releasing Corporation, or as it is sometimes referred to–“Pretty Rotten Crap”. In business from 1939-1947, PRC churned out 179 films, none of which cost more than $100,000 to produce. Most of their films lasted an hour and a few minutes and were filmed in six days.

The company got off to a good start in 1939 with Hitler, Beast of Berlin, anti-Nazi propaganda in a year when major Hollywood studios were avoiding the subject. It didn’t do well at the box office until the U.S. actually joined the war two years later. This is the only film I’ll mention here that I haven’t seen. Judging from the reviews, its historical importance is not matched by the quality of the script or acting.

Of most interest to Black Gate readers is PRC’s horror output, the most famous being Bela Lugosi’s The Devil Bat (1941). Lugosi is great in this one, playing the sinister Dr Carruthers and looking his evil best despite being surrounded by rather wooden acting and bad special effects. It was a commercial success but Lugosi went on to other things and PRC’s sequel Devil Bat’s Daughter (1946) doesn’t include him. Instead it stars Rosemary La Planche (Miss America 1941) playing Carruthers’ daughter and returning to the family home to solve the mystery of his death. She relives her childhood bat trauma in the form of a mishmash of outtakes from the original film. 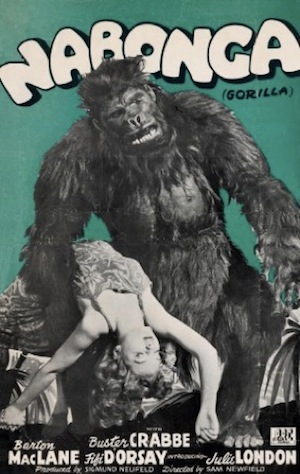 PRC recycled The Devil Bat again in the 1944 Western Wild Horse Phantom. Gunfighter Billy Carson (played by Buster Crabbe, who in his better, earlier years played Tarzan) and his sidekick Al St. John (more on him later), track down some outlaws to a supposedly haunted mine in order to find their loot. Cue that crazy old bat! Oh, and while it’s a Western, it takes place in the modern day with the outlaws escaping in a getaway car. Huh?

The company also made a few gorilla movies, which I guess can be labeled as horror. Gorilla movies were quite a thing back then, with audiences safely playing out their titillating fears of lovely white women being hauled off into the jungles of Africa by a big, brutish gorilla. I’ll leave you to do the psychoanalysis on that one. It isn’t too difficult. Nabonga (1944) turns that trope on its head by having the lovely white woman hauled off before the movie even starts, being raised from childhood by the stereotypical big, brutish gorilla who goes into possessive attack mode when Our Great White Hero shows up to save her. She doesn’t really want to be saved, but whatever.

My favorite PRC horror film is the sadly overlooked Strangler of the Swamp (1946). This creepy tale involves a haunted ferry in a Cajun swamp. The ghost of a wrongfully lynched man haunts the shore and the ferry itself, taking vengeance on those who wronged him. It’s done on a tight budget. The water in the swamp is hidden with fog, because that was cheaper than flooding the set, and the only other sets are both shores and two interiors. Despite this, the acting is capable and the atmosphere moody. Charles Middleton gives a creepy performance as the ghost and German director Frank Wisbar gives the film an Expressionist touch. If you’re going to look up any movie I talk about here, look up this one. 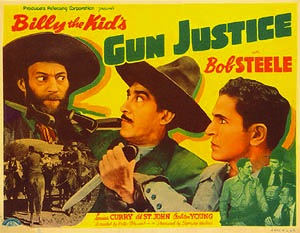 Now onto the Westerns, PRC’s main fare. The company churned out dozens of these a year, the most popular being the Billy the Kid series. Instead of being a young punk who liked shooting people, he’s actually a misunderstood cavalier wrongfully accused of murder. And instead of trying to exonerate himself, he puts himself in danger by helping various sheriffs solve crimes, then has to sneak away to avoid being arrested himself. 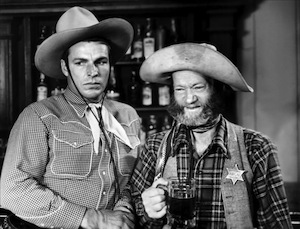 Billy the Kid was first played by Bob Steele and later Buster Crabbe. There’s plenty of shoot-em-up action, horse chases, some simple stunts, and the required saloon fight. At times the saloon fights get out of hand and flimsy walls and railings bend as the actors slam into them. Don’t bother with a retake, the kids will never notice! All these films are good family fun, if a bit lowbrow.

What raises them to a slightly higher plain is Al St. John, who plays Billy the Kid’s sidekick Fuzzy. Al St. John was an old-time character actor who got his start in silent comedies alongside his uncle Fatty Arbuckle. Later in life he was a bewhiskered old coot who popularized the idea of the comedic, bumbling sidekick as a foil to the dashing Western hero, and played Fuzzy alongside a host of leading men. St. John is a joy to watch, outshining everyone else in the scene and often being the guy who moves the plot forward. His physical humor is straight out of his silent days, and you can tell he’s truly enjoying himself.

It seems that St. John understood that having fun was what B-movies were all about.

Most of these films are in the public domain and can be found online. Enjoy!

Great article, Sean! Poverty Row films . . . a real guilty pleasure of mine. “Strangler of the Swamp” was not as bad as I thought it would be when I finally saw it about 20 years ago. Last night I watched some old American International films — a step up from Poverty Row: “The She Creature,” and “The Day the World Ended.” Good, clean, innocent fun!

Charles Middleton as the Strangler? Hey, that’s Ming of Mongo! So, no surprise he turns in a worthy performance, as he was about the only one acting (as opposed to emoting) in those Flash Gordon serials. And Buster Crabbe was playing Billy the Kid for PRC? I guess he helped Mr. Middleton get a job with PRC, then.