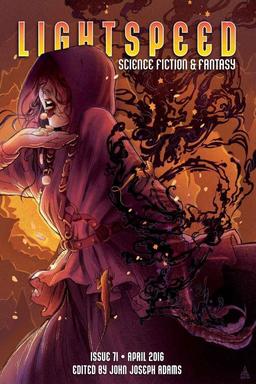 The fiction in every issue of Lightspeed is gradually made available on the website as the month progresses; the last story in the newest issue became available on April 28th, and the entire issue is now yours to enjoy free. The April issue includes tales of supervillain ex-boyfriends, queens rescued from dragons, quantum challenges, and the first mating between humans and aliens.

In “Origin Story” by Carrie Vaughn we are introduced to Commerce City, a town overrun with heroes, supervillains, and vigilantes. Mary, the protagonist, is standing in line when she recognizes that the supervillain robbing the bank is none other than her ex-boyfriend Jason Trumble. The story is more a quick vignette about lost loves and rekindled (?) relationships than SF…

“The Birth Will Take Place on a Mutually Acceptable Research Vessel” by Matthew Bailey is the final entry for the month. In it, the first mating between Humans and the recently met Tharkan species is the subject. Told from the viewpoint of the expectant human mother, the story delves into the complexities of intercultural and interspecies communication. Bailey does a solid job of presenting the larger world through the eyes of the narrator and making the personal universal. The constant repetition of the idea of Self and Autonomy is well played against the unique situation of a first interspecies birth. Overall, the story, while not groundbreaking, is interesting and the best of the issue.

The cover artist this issue is Sam Schechter.

The ebook-exclusive reprint this month is the novella “Incident on a Small Colony” by Kristine Smith, plus there’s an excerpt from Thomas Olde Heuvelt’s new novel HEX (which we covered here.)

This month Lightspeed has original fantasy from Nghi Vo and Rudy Rucker, and fantasy reprints by Theodora Goss and Ken Scholes, plus original science fiction by Carrie Vaughn and Matthew Bailey, with SF reprints by Patricia Strand and Peter Watts.

Here’s the complete contents for the April issue.

“Dragon Brides” by Nghi Vo
Dragon brides are notoriously difficult women. We have lived with dragons, after all, those strange and terrible animals with their curiously human eyes, and some of us come back down from the broken mountains with their hisses still in our ears. I was taken by the green dragon of Mahr when I was fifteen, and it was a full year before my lord brought me back down. Forty years would pass before I would come to those steep paths again.

“Lily, with Clouds” by Theodora Goss (from Alchemy #1, Winter 2003.)
Eleanor Tolliver’s heels clicked on the sidewalk — click click, click click, like a cantering horse, if a horse could canter in size seven and a half shoes. It was odd, this lopsided step, in a woman whose lavender suit had been bought last week at Lord & Taylor. Really, she admitted to herself as she clicked down Elm Street, she should not have bought the narrows. The left shoe, in particular, pressed against her corn and produced the cantering gait we have noticed.

“The Knobby Giraffe” by Rudy Rucker
My name’s Irit Ziv. I have a low-rent apartment in the East Village that I used to share with my girlfriend, Shirley Chen. It’s April now, and Shirley died four months ago. Ever since then, I’ve been visiting Ma and Pa’s flat in Brooklyn Heights a lot. An awesome spot, with a full view of lower Manhattan. The trees by the river are turning green. I’m a grad student at NYU, trying to finish a PhD thesis in the physics department. Physics was probably a bad choice for me, but it’s too late to change.

“Of Metal Men and Scarlet Thread and Dancing with the Sunrise” by Ken Scholes (from Realms of Fantasy, 2006)
Rudolfo’s Gypsy Scouts found the metal man sobbing in an impact crater deep in the roiling smoke and glowing ruins of Windwir. He crouched over a pile of blackened bones, his shoulders chugging and his bellows wheezing, his helmet-like head shaking in his large metal hands. They approached him silently, ghosts in a city of ghosts, but the metal man still heard and looked up.

“Cause For A Haunting” by Patricia Strand (from On Spec, 2003)
Kate took the hatbox to the dining room table, lifted the top, and removed the items: a glass brooch, a wood carving of a beaver, an empty perfume bottle, a blue silk scarf. It was the photograph she picked up: four by six, black and white, but well preserved beneath glossy finish. A man and woman stood in front of a small, red-bricked house—this house, but minus the coniferous shrubs and mature trees, it appeared different. Bleak almost, the coziness that had lured Kate and Shawn absent.

“Origin Story” by Carrie Vaughn
Living in Commerce City, odds are you’re going to get caught up in something someday — pinned down in the crossfire of some epic battle between heroes who can fly and villains with ray guns, held captive in a hostage crisis involving an entire football stadium, or even trapped by a simple jewelry heist or bus hijacking. When my turn came, I got stuck in a bank robbery.

“Collateral” by Peter Watts (from Upgraded, 2014)
They got Becker out in eight minutes flat, left the bodies on the sand for whatever scavengers the Sixth Extinction hadn’t yet managed to kill off. Munsin hauled her into the Sikorsky and tried to yank the augments manually, right on the spot; Wingman swung and locked and went hot in the pants-pissing half-second before its threat-recognition macros, booted late to the party, calmed it down.

Editorial, April 2016 by John Joseph Adams
Television Review: The Man in the High Castle (Season 1) and Occupied by Christopher East
Book Reviews: April 2016 by Andrew Liptak
Interview: Bill McGoldrick by The Geek’s Guide to the Galaxy