Terri Windling is a superstar in the field of fantasy. She’s been awarded the World Fantasy Award nine times, and she’s also won the Mythopoeic Fantasy Award, the Bram Stoker Award, and the 2010 SFWA Solstice Award. As an editor at Ace she discovered and promoted first novels by Charles de Lint, Emma Bull, and many other important authors; with Ellen Datlow she co-edited 16 volumes of the seminal Year’s Best Fantasy and Horror from 1986–2003. She’s also an author in her own right, with several highly regarded works to her credit, including the Mythopoeic Award-winning novel The Wood Wife, and a number of children’s books, such as The Raven Queen and The Winter Child.

But believe it or not, she got her start in this industry as an artist. I didn’t discover that until I interviewed Ellen Kushner for my Tale of Two Covers article on her Basilisk anthology earlier this month. Here’s Ellen:

It’s an anthology I’m still really proud of. It’s also how I met Terri Windling, who did the interior illustrations (which much more accurately represent the aesthetic of the stories). She’d just come to town, and was showing her art portfolio around. Jim [Baen] thought I’d like her work, and that he wouldn’t have to pay her much… Terri, of course, essentially took over my job as fantasy expert for Jim a few months after I left Ace.

Ellen reached out to Terri as we were fact checking the article, and in the process Terri gave me the fascinating back story on how she began her career as one of the most respected and admired editors in the field with the Elsewhere series of anthologies, the first of which won the World Fantasy Award. Here’s what she said.

The Elsewhere series started like this: Jim Baen first saw the three pieces of cover art when George de Hoff was showing his portfolio around, liked them, bought the rights to them, then called me into his office and asked me to edit three fantasy anthologies to go with them. I was Jim’s assistant at the time, having taken over the job when Ellen left, and he basically said the same thing to me that he had said to her about Basilisk: “Publish any stories you want, just so long as you get them cheap.”

Jim’s assignment was exciting, but also daunting. I was only 22 at the time, and Ellen’s brilliant Basilisk was a very hard act to follow. I brought my then-partner, Mark Arnold, into the project, and we named the series after the bookstore he’d previously owned in Ohio (where I had worked during my college years). I was gobsmacked when we won the World Fantasy Award, and I’ve been editing anthologies ever since. 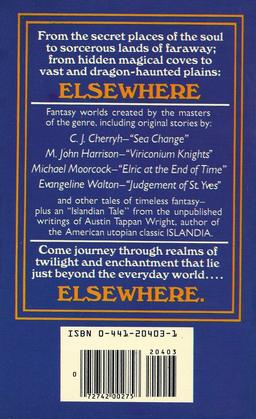 Here’s the Table of Contents for Volume I:

Introduction by Terri Windling and Mark Alan Arnold
“The Green Child” by John Crowley
“Pooka’s Bridge” by Gillian Fitzgerald
The Hosting of the Sidhe, poem by William Butler Yeats (1893)
“The Judgement of St. Yves” by Evangeline Walton
“Sweetly the Waves Call to Me” by Pat Murphy
The Merman in Love, poem by Jane Yolen
“The Renders” by Janny Wurts
“The Golden Slipper” by Antanas Vaiciulaitis (1959)
A Spell for Sleeping, poem by Alastair Reid
“The Last Voyage of the Ghost Ship” by Gabriel García Márquez (1954)
Pale Horse, poem by Masao Takiguchi (1969)
“The Thunder Cat” by Nicholas Stuart Gray (1965)
“Queen Louisa” by John Gardner (1972)
The Song of the Dragon’s Daughter, poem by Ursula K. Le Guin (1977)
“The Prodigal Daughter” by Jessica Amanda Salmonson
“Little Boy Waiting at the Edge of the Darkwood” by Andrew J. Offutt
“The Tree’s Wife” by Jane Yolen (1978)
Introduction to “The Story of Alwina” by Tappan King
“An Islandian Tale: The Story of Alwina” by Austin Tappan Wright
“The Unicorn Masque” by Ellen Kushner
“The Succubus,” by John Alfred Taylor (1971)
“Ku Mei Li: A Chinese Ghost Story” by M. Lucie Chin
“Tatuana’s Tale” by Miguel Angel Asturias (1930)
Overheard on a Saltmarsh, poem by Harold Monro (1912)
“Tales of Houdini” by Rudy Rucker
Oh! My Name Is John Wellington Wells, poem by W. S. Gilbert (1877)
“Elric at the End of Time” by Michael Moorcock
Song of Amergin, poem by Robert Graves (1948)
“Viriconium Knights” by M. John Harrison
“The Magician” by William Kotzwinkle (1971)
“Sea Change” by C. J. Cherryh
Contributors’ Notes

Elsewhere: Tales of Fantasy was published by Ace Books as a paperback original in September 1981. It is 367 pages, priced at $2.75. The cover art is uncredited. It has never been reprinted. Copies are relatively easy to obtain; I bought an unread copy on eBay in perfect condition last month for $1.50.

“Bellamy Bach” was a pseudonym used by Terri Windling (among others). When I asked who wrote “A Tourist Camped on a Donegal Field,” here’s what Terri told me:

Bellamy was a shared pseudonym used at various times by several different people. Only the Borderland stories under the Bellamy name were mine. In this case, the poem was by Mark Alan Arnold. Mark came up with Bellamy’s name, and was the first to use it.

This time the cover was by George de Hoff, who got Terri her start at Ace by showing Jim Baen her artwork. Terri also did the interior artwork.

Introduction by Terri Windling and Mark Alan Arnold
In the Very Earliest Time, poem by Eskimo Chant
“Junction’s Pleasure” by Richard Englehart
“The Ern Queen” by Jane Newbold
Gwydion’s Loss of Llew, poem by Ellen Kushner
“Amigo Heliotropo” by Felix Marti-Ibanez (1963)
“The Golden Goat” by Michael de Larrabeiti
The Island and the Cattle, poem by Nicholas Moore (1979)
“The Fallen Country” by S. P. Somtow
Small Dragon, poem by Brian Patten (1962)
The Twelve Dancing Princesses, poem by Anne Sexton (1971)
“The Courtship of Mr. Lyon” shortstory by Angela Carter (1979)
Lord of the Reedy River, poem by Donovan Leitch (1971)
“In the Hall of Grief” shortstory by Jane Yolen
Magic Strings, poem by Li Ho
“The Handsomest Drowned Man in the World” by Gabriel García Márquez (1968)
Haunted,poem by R. P. Lister (1955)
“Visitors to a Castle” by Sylvia Townsend Warner (1972)
A Tourist Camped on a Donegal Field, poem by Mark Alan Arnold
“Gran and the Roaring Boys” by Jenny Sullivan (1974)
Homecoming, poem by Peter Viereck (1967)
“The Little Dirty Girl” by Joanna Russ
“A Young Man, Gleaming, White” by Joäo Guimaräes Rosa (1968)
“Cerridwen and the Quern of Time” by Paul Hazel
“The Ship from Away” by Evangeline Walton
“The Day the World Died” by Thomas Wiloch
“Blood and Dreams” by Richard Monaco
The Trash Dragon of Shensi, poem by Andrew Glazer (1978)
“The Vanishing Trolls” by Gaird Wallig (1980)
The Magic Wood, poem by Henry Treece (1945)
“The Healer” by Robin McKinley
“The Harrowing of the Dragon of Hoarsbreath” by Patricia A. McKillip
“The Moon Porthole” by Fritz Leiber
Contributors’ Notes

Elsewhere II: Tales of Fantasy was published by Ace Books as a paperback original in November 1982. It is 388 pages, priced at $2.95. The cover art is by George de Hoff.

The interior artwork was once again by Terri Windling. Here’s the Table of Contents.

Introduction by Betty Ballantine
God Is Alive, Magic Is Afoot, poem by Leonard Cohen (1966)
“The Stagman” by Robin McKinley
“Harvest Child” by Steve Rasnic Tem
And When the Green Man Comes, poem by John Haines (1966)
“Simpson’s Lesser Sphynx” by Esther M. Friesner
Intruder, poem by Susan Feldman (1975)
“The Duke of Orkney’s Leonardo” by Sylvia Townsend Warner (1976)
“The Unknown” by Maria Luisa Bombal (1982)
In the Court of the Crimson King, poem by Ian McDonald and Peter Sinfield (1969)
“The Warrior’s Daughter” by Susan Heyboer O’Keefe
Gretel in Darkness, poem by Louise Gluck (1969)
“Rocinante” by Steven R. Boyett
Springsong in East Gruesome, Vermont, poem by Ramon Guthrie (1968)
“The Idol’s Eye” by James P. Blaylock
“The Lady of the House of Love” by Angela Carter (1975)
The Undead, poem by Richard Wilbur (1954)
Voices Answering Back: The Vampires, poem by Lawrence Raab (1969)
“Happy Dens: or, A Day in the Old Wolves Home” by Jane Yolen
The Six Badgers, poem by Robert Graves (1960)
“The Chapel Perilous” by Naomi Mitchison (1955)
“Malagan and the Lady of Rascas” by Michael de Larrabeiti
“Bones” by P. C. Hodgell
The Toaster, poem by William Jay Smith (1980)
“The One We Were” by Tanith Lee
“On the Dark Side of the Station Where the Train Never Stops” by Pat Murphy
Simultaneously, poem by David Ignatow (1964)
“Franz Kafka” by Jorge Luís Borges” by Alvin Greenberg (1970)
“The Strange Fellows’ Palm-Wine Tapster” by Amos Tutuola (1952)
“Tort and the Dancing Market-Women” by Amos Tutuola (1952)
“Kitty” by Paul Bowles (1981)
Princeps Tenebrarum, poem by John Alfred Taylor
“Riquiqui, I Love You!” by Felix Marti-Ibanez (1963)
Being a Giant, poem by Robert Mezey (1976)
“A Matter of Music” by Patricia A. McKillip
Contributors’ Notes
Index to the Elsewhere Trilogy

Elsewhere III: Tales of Fantasy was published by Ace Books as a paperback original in April 1984. It is 402 pages, priced at $3.95. The cover art was once again by George de Hoff.

The Table of Contents listings for those are fascinating. Volume 1 contains a story by the man best known for the novelization of ET, William Kotzwinkle, and another name I don’t usually associate with fantasy and science fiction, John Gardner (although I guess Grendel is a fantasy novel), and volume 2 had a poem by the great psychedelic folk-rock singer/songwriter Donovan Leitch.

Wow! There are so many terrific writers!

> Volume 1 contains a story by the man best known for the novelization of ET, William Kotzwinkle

Kotzwinkle has a few other novels of interest to fantasy fans, especially Doctor Rat, but also:

– Nightbook, sort of a Thousand-and-One-Nights collection of linked stories with sexual themes,
– The Bear Went Over the Mountain, about a bear who sells a novel,
– The Amphora Project, far-future SF with space pirates,
– The Exile, the tale of a time traveler who accidentally ends up in Nazi Germany, and
– The Game of 30, about a P.I. who stumbles on a 3000-year-old game that tells the future.

And possibly others, like Herr Nightingale and the Satin Woman and Hermes 3000, which sound like they’re worth investigating.

I had no idea that was the same Donovan! Now I have to track down a copy of Volume II…

Yes indeed! Terri has a marvelously inclusive definition of fantasy. These volumes clearly set the tone for the famously far-reaching contents of the Year’s Best Fantasy Stories.

Splendid! Let us know what you think.

Mark Arnold’s bookstore, Elsewhen, was located in Yellow Springs, Ohio (and still is, but now known as “Darkstar”). Mr. Arnold also had a Friday night radio program on WYSO FM 91.3, broadcast from Rod Serling’s alma mater, Antioch College, on which Arnold read SF and fantasy stories, often using Walter (now Wendy) Carlos’s “Sonic Seasonings” as great atmospheric background music. Somewhere in my basement I have several dozen deteriorating cassette tapes of his hour-long show. I frequented the Little Art Theater in the town and always visited the bookstore whenever I could, because it was the only immediate source for Corgi and Panther and Sphere paperbacks, published in Great Britain, of many titles not commercially available in the US (Dennis Wheatley, Bram Stoker, Robert Bloch, and many others). At one point, I began seeing a young white-haired girl behind the cash register, and it was only many years later that I realized it must have been Terri Windling. I was truly sorry when the store changed hands, and although Darkstar still carries lots of great merchandise, the ambience of the place lost something when Mr. Arnold and Ms. Windling departed for much more illustrious careers. They have been very fondly remembered.

Donovan’s “Lord of the Reedy River” is actually a song, from his “H.M.S. Donovan” LP. Much more effective as a moody tune. Mary Hopkin does a very nice job of it on her “Postcard” LP.

Sorry for the error up there: the bookstore was “Elsewhere,” not “Elsewhen.”