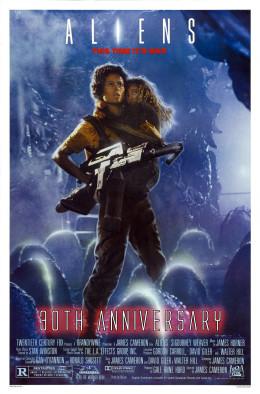 If you can get your brain around this fact, it has been nearly 30 years since the release of James Cameron’s iconic horror / scifi movie Aliens.

The film has been the subject of a lot of web-chatter of late, not simply because of its pending milestone birthday, but also due to the on-again-off-again sequel project by Neill Blomkamp that would have reunited Ripley and Newt, but which is now permanently and possibly terminally on hold.

But hardcore Aliens fans are still holding out hope. Speaking with Icons of Fright in November, Michael Biehn (Corporal Hicks) confirmed that Blomkamp’s film would have wiped the Alien third and fourth films out of continuity, while showing confidence that the project wasn’t entirely dead. According to him, 20th Century Fox would be downright foolish to not pursue this project once Ridley Scott is done with Alien: Covenant:

The basic idea is acting like Alien 3 and 4 never existed. I know Ridley Scott is doing his movie first and is going to be the executive producer on this one, so I’m really looking forward to that. I know that Ridley’s focus is on [Alien: Covenant] and I’m sure that he and Fox both don’t want that and Neill’s movie to come out right next to each other, because they’re kind of two different worlds, with Aliens taking place thousands of years later, which is how they explained it all to me, but at the same time, they want to give them a similar feel. I know they’re putting the brakes on Neill’s movie just for a little while, but I really think that it would be embarrassing to Ridley and Fox and Sigourney [Weaver] if they just didn’t make the movie.

So while we all wait to see what happens, let’s get a jump on the Aliens birthday celebrations with a couple of early gifts.

First, and for absolutely no good reason, I bring you the Xenomorph cookie jar, courtesy of Think Geek. The officially licensed 12” creation is ceramic, created by famed DC action figure sculptor Paul Harding and in true Think Geek form, the product description is a treat in itself.

Aliens. Those darn Xenomorphs are always trying to shove something down the throats of humans. You know, maybe if they made the Chestburster embryos look like cookies, the Facehuggers could get cushy desk jobs. Or, you know, something else they have the skillset for. They’d probably make great massage therapists, what with all those little appendages.

Big warrior Xenomorph. Wants to hold your cookies. Totally not going to kill you and use your body as a host. Much.

You can prove you are the most hardcore Aliens fan of all time, for a mere $44.99. 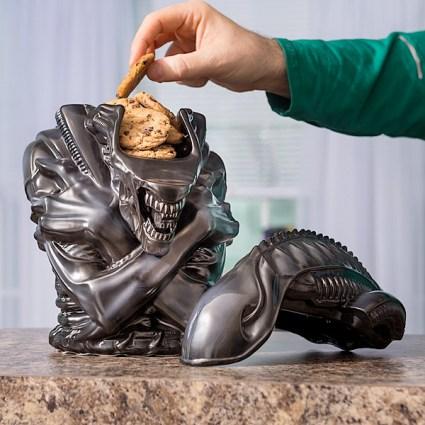 Second, back in 1986 when Aliens was blowing away current box office records, Saturday Night Live opened their 12th season by spoofing the movie with their guest host, Sigourney Weaver.

The whole thing cracks me up, but what is classic SNL is the actual “alien” and Ms. Weaver randomly removing her clothes.

One last thing, Dark Horse Comics is marking 4/26 (get it?) as Aliens Day by releasing an anniversary hardcover edition of their Aliens comic. So how will you be celebrating? Post a comment or drop a line to sue@blackgate.com.

That is one freaky-deaky cookie jar, guaranteed to give all snacking children a chocolate-chip phobia.

And to this day I will still quote Dana Carvey (“We’re shredded wheat, man! We’re grated cheese!”) whenever an RPG scenario goes south on the party.

Not sure how I shall celebrate Aliens Day (4/26, most exciting on its 55th, or LV occurrence). But, I still would not repudiate Alien 3 or Alien 4 Repudiate the greatest on-screen backward b-ball swish shot of all time? I’d rather be grated cheese, man!