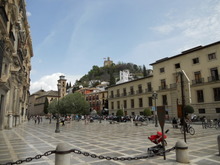 According to at least one source, Granada’s Alhambra Palace is the most visited tourist attraction in Spain. I’m sure the people in Barcelona would argue that their Sagrada Familia actually holds that honour, but the fact is that people have been going to visit the Alhambra since it became a Moorish royal palace in 1333. Or at least since Washington Irving wrote his Tales of the Alhambra in 1840. 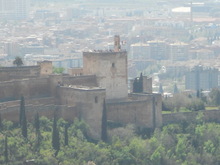 I visited it for the first time when I was 17, and I’ve been back at least a dozen times. I stopped going while on my regular visits to Granada when the place got so popular that you had to book your tickets in advance. I approve of the practice – it’s hard to restore a place when sheer volume of tourism wears it out faster and faster – but I miss going in day light, when you can really see the colours, and the details of the workmanship.

On the other hand, they’ve been offering night tours for a while now, which are pretty much walk-in affairs, with no need to book days or even weeks in advance. Going at night has its own special rewards. 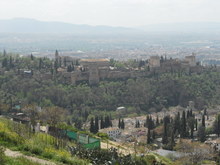 True, the rooms and patios available to you are limited, but they’re all lit in imitation of the lighting that was available in the time the palace was built, so you get a much better idea, I think, of what it might have been like to actually occupy these rooms yourself. This effect is much enhanced by the fact that you don’t have to share your visit with a thousand others.

Of my daytime visits there are particular things that stand out in my memory, as opposed to things I took photographs of. Practically the first point everyone visited was the watch tower immediately inside the old entrance. I only went up the very first time. I’m afraid of heights, but since from the inside of the grounds the building only looks about three storeys high I was unconcerned. I found out that it’s completely open at the top, and that since it was part of the citadel’s outer wall, it was considerably more than three storeys high on its outer side. I have to stand at the bottom and wait for the others now.

On my very first visit I kept looking for the famous Patio of the Lions, and not finding it. Finally, I asked, and was directed to a very nice patio I’d passed through a couple of time already. Turns out I was imagining African lions, and not the very much smaller and lesser-maned Iberian lion.

The inside of all the buildings is beautifully cool, even in 100F heat, temperatures not uncommon in August in this part of Spain. Even the outside spaces are cooler than you would expect, thanks to some nifty 14th-century engineering that keeps water constantly on the move, using only gravity. 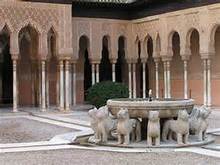 Still, I think my favourite room is the Whispering Gallery. I haven’t seen it for a while, since it’s not on the night tour, but it’s the kind of room a writer can’t visit even once without trying to think of a scene to use it in. It’s a round room, with a vaulted ceiling containing at least eight arches which reach all the way to the floor. Unlike other such places, where any words whispered at any point at the wall can be clearly heard at any other point, in the Alhambra’s Whispering Gallery your secrets can only be shared with the person standing directly opposite to you, as the sound travels across the arch you’re standing in, and down the other side.

I’m sure engineers today are fully capable of recreating such a space – along with all the other structural wonders of the palace. It’s a shame no one seems to want them to.

A word on the photos. There are thousands of images of the Alhambra available, so I chose only a few that come from my own collection. The first is the tower I spoke of above, from the Plaza Nueva in Granada. Here you can see why the palace was called “a pearl among emeralds” for the light stone building set among evergreens – many more of them in the past. The second is the same tower, with tourists atop, so you can judge size and height for yourself. The third is the panoramic view of the palace from the road to the Sacramonte, and the fourth is a slightly different angle, with snow. And finally, the famous Patio de los Leones.

Violette Malan is the author of the Dhulyn and Parno series of sword and sorcery adventures, as well as the Mirror Lands series of primary world fantasies. Find her on Facebook, on Twitter, or on her website www.violettemalan.com.

I really like your article and I think that if someone comes to Spain and have the possibility of visiting the Alhambra, it must do so without a doubt