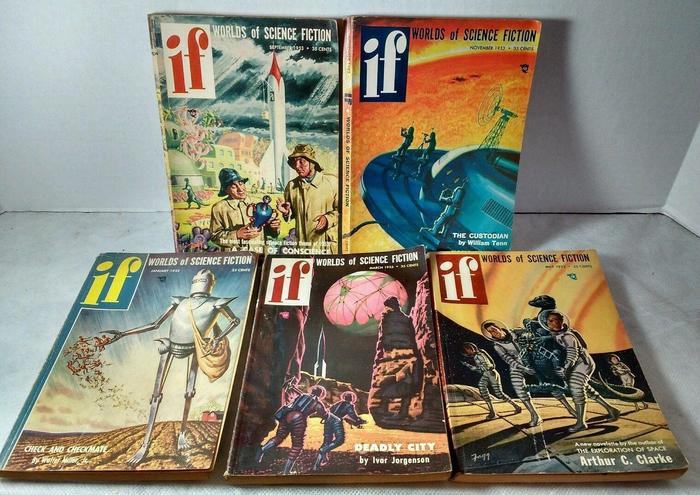 The entire run of IF Magazine, one of the great 20th Century science fiction magazines, is now freely available online at the Internet Archive.

IF, originally titled If Worlds of Science Fiction and later Worlds of If, was a monthly magazine that began publishing in 1952. It was published continuously for 22 years, until it was merged with Galaxy in 1974. During its run it published some of the most acclaimed SF of the 20th Century, including “I Have No Mouth, and I Must Scream” by Harlan Ellison, Robert A. Heinlein’s The Moon is a Harsh Mistress, Larry Niven’s “Neutron Star,” James Blish’s A Case of Conscience, Roger Zelazny’s Creatures of Light and Darkness, Heinlein’s Farnham’s Freehold, Jack Williamson and Fredrick Pohl’s The Reefs of Space, and much, much more. 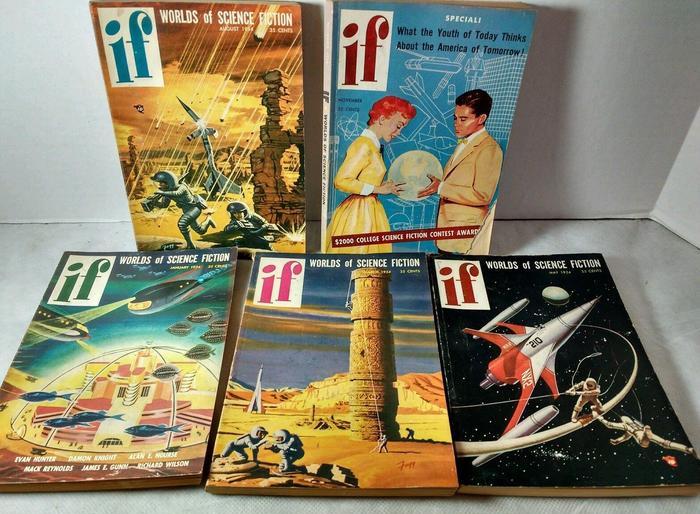 The Internet Archive presents all 175 issues of IF Magazine in a fully browsable format, in full color, for free. You owe it to yourself to check it out. 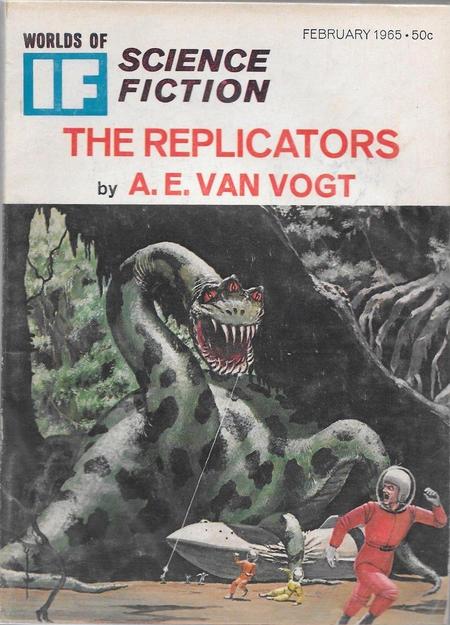 In honor of the Internet Archive’s efforts, I’ve assembled Black Gate‘s own virtual tour of IF magazine. I’ve collected cover images from every era of the magazine, starting with the early 50s and working up into the 70s.

Click on any of the pics for a bigger version. 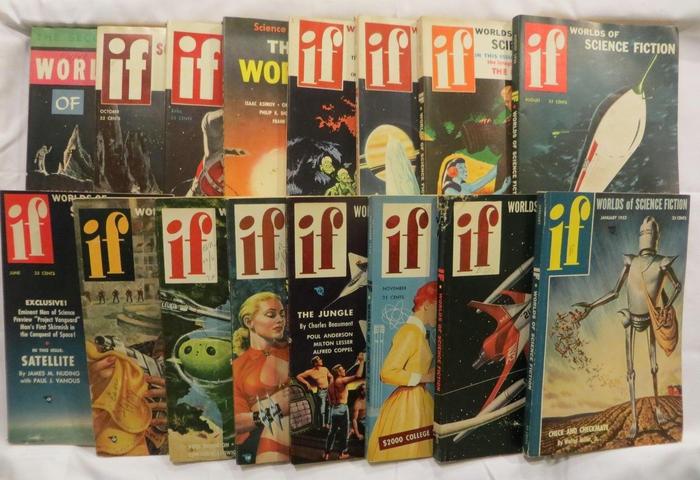 If magazine had some of the best cover artists in the business, including Ed Valigursky, Ken Fagg, Mel Hunter, Frank Kelly Freas, Ed Emsh, and many others. 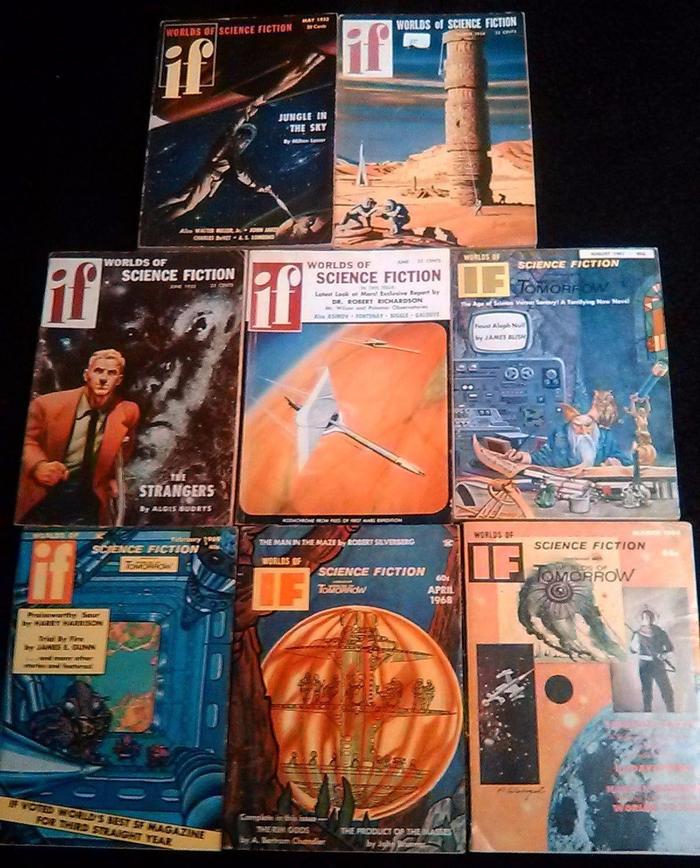 During its history IF had six editors: 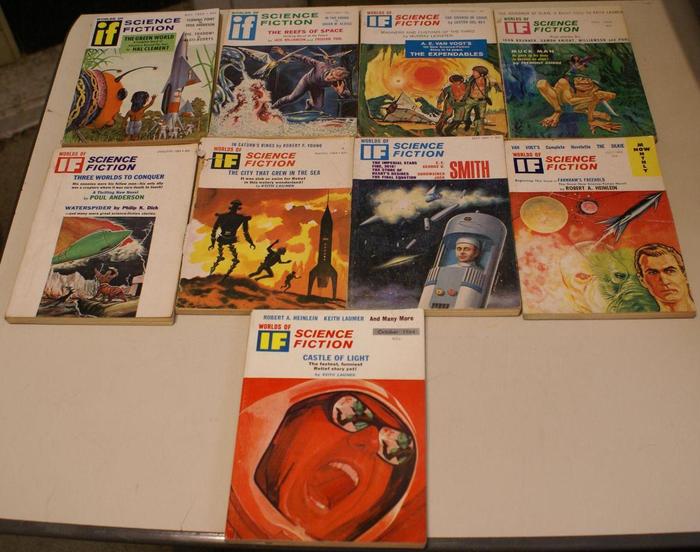 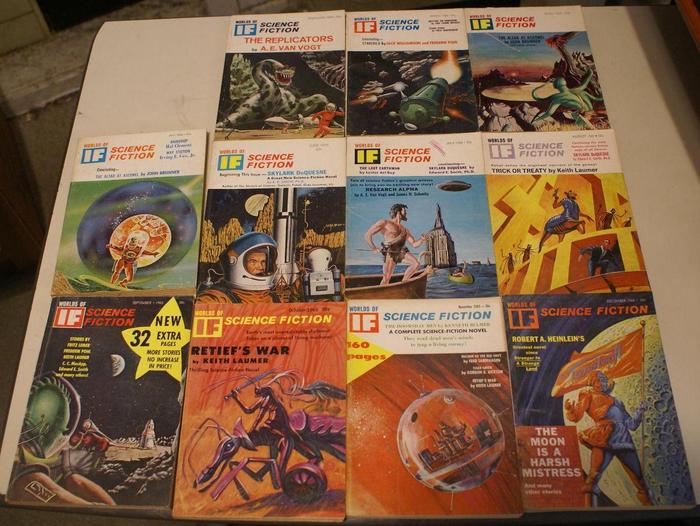 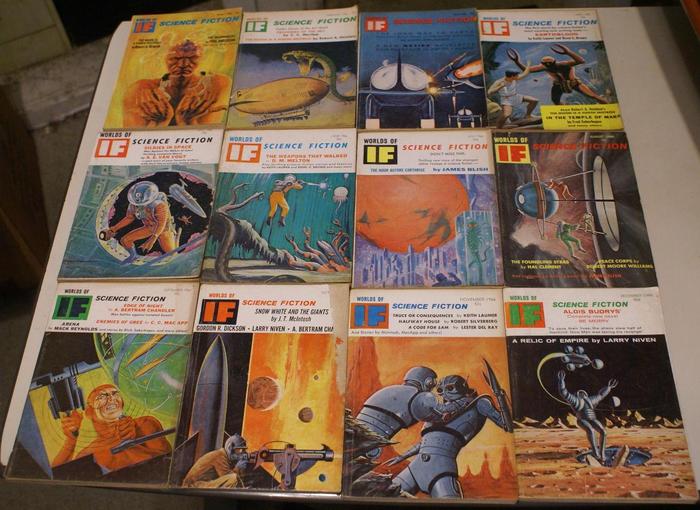 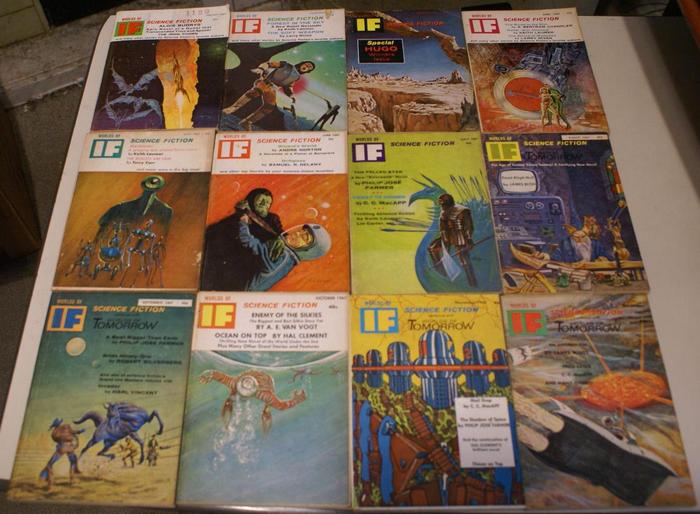 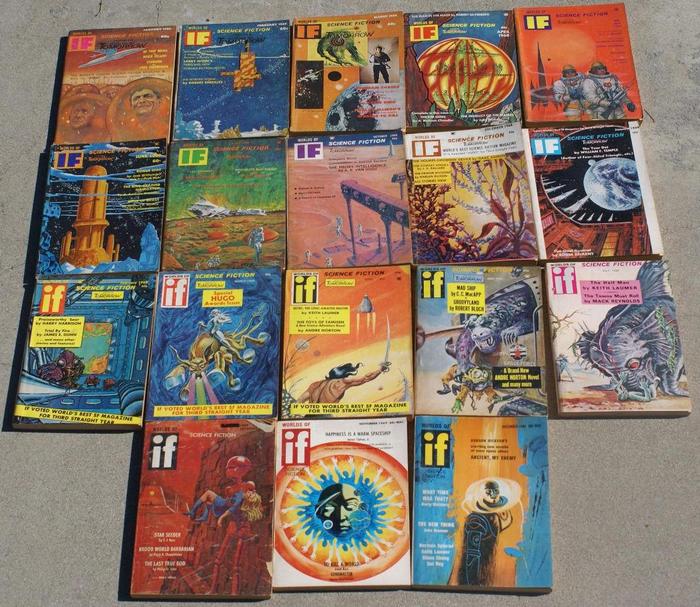 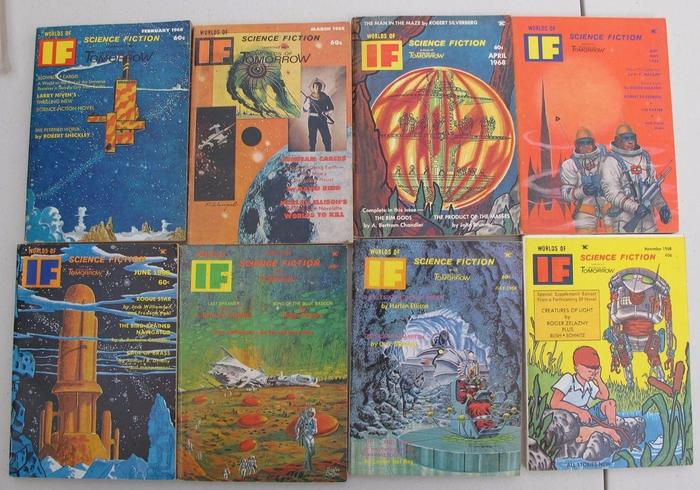 Below is a sample of issues from the late 60s and early 70s. 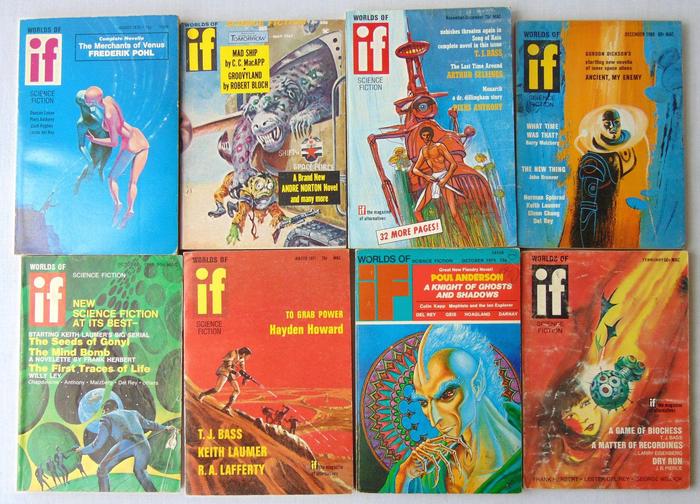 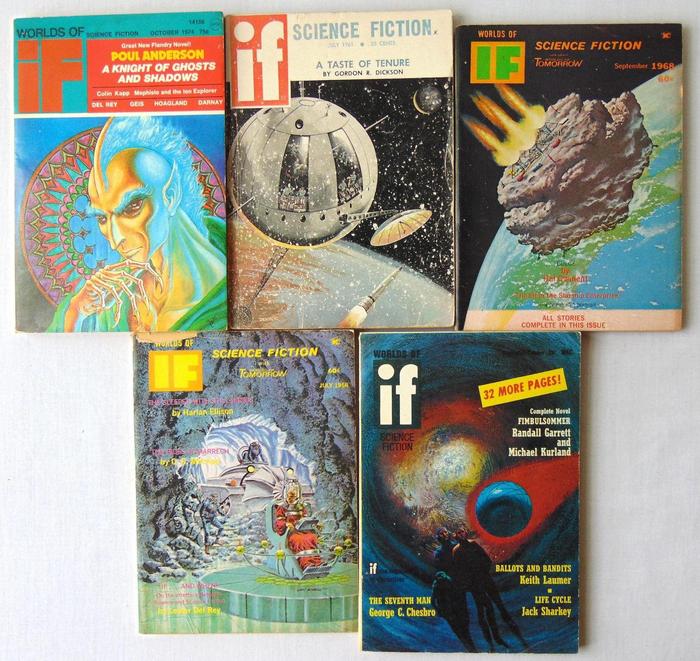 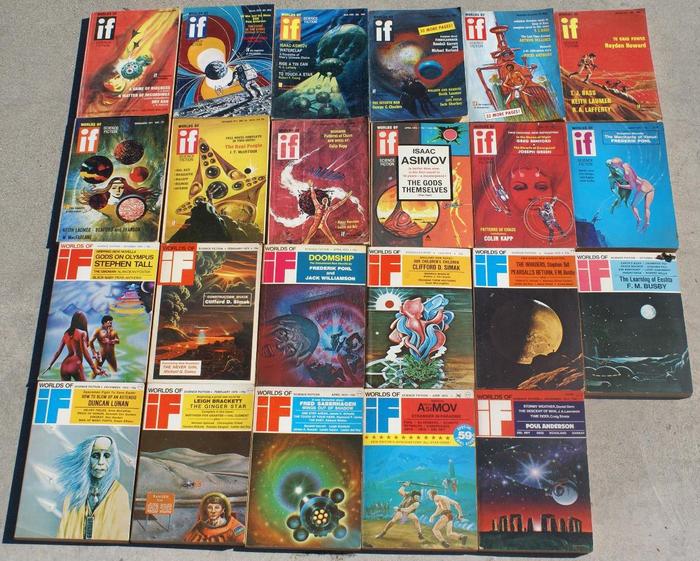 See all of our magazine coverage here.

One of my real regrets is that when I first discovered SF magazines, in late July 1974, IF was on its last legs, and the newsstand I frequented didn’t carry it. So I never saw a copy until a long time later, when I was able to buy some used copies.

IF was my favorite SF magazine in the late 1960s. Fred Pohl was a brilliant editor. Loved the covers, too!

There was a bookstore in Ottawa in the mid-70s that used to sell bundles of new issues. Looking back on it now, it was probably of questionable legality. But they had half a dozen new issues of If and Galaxy wrapped up in plastic, selling at a deep discount. I spent every cent I had on them, and in a few weeks assembled a great collection of 70s Galaxy and IF. It was my intro to both magazines.

I wish I had been able to buy IF while it was still publishing… I think the first bundle of issues I bought was in 1977 or 78. I envy you that!

When I am done with Galaxy and F&SF I will begin my journey through If. I am one issue short of a full run so if anyone has an extra copy of December 1958 laying around let me know 🙂

Wow! That’s quite a collection. I’m envious of your treasures… and the time you have to read them!

I got the first issue of Jim Baen’s IF as a birthday gift while it was still new on the stands. Unfortunately, the last issue appeared later that same year. That was the period of GALAXY’s autumnal glory, too, although it lasted for a few more wonderful years. Lots of GALAXY is also available at the Internet Archive, although I don’t know if they have the complete run yet.