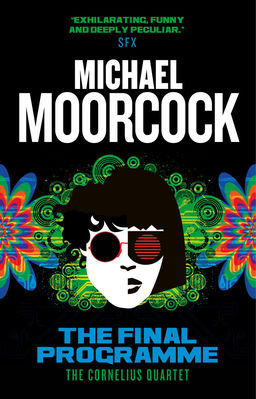 Woo hoo! We have three winners!

Last week we invited you to enter a contest to win one of three copies of The Final Programme, the opening volume in Michael Moorcock’s classic Cornelius Quartet, available again in a brand new edition from Titan Books. To enter, all you had to do was send us an e-mail with a one-sentence review of your favorite Michael Moorcock tale.

We don’t have room to present all the entries here, but we can offer up a half-dozen of the best. The very first one we received was from Stu White, who gets extra points for using our word of the week, ‘reconceptualization,’ in a grammatically correct sentence:

Elric of Melnibone is a stellar reconceptualization of the fantasy genre, and was perhaps the first time I read a book that focused on an antihero.

Meanwhile, Stephen Milligan gets points for taking the pulp angle.

The Jewel in the Skull is a masterclass in pulp, introducing exquisitely-named hero Dorian Hawkmoon and his battle against the inspired evil empire that mixes history and horror equally well, all in a swift little volume that sates the need for sword and sorcery while whetting the appetite for the next volume.

While Rob Baseel sounds just like a 1970s Marvel supervillian villain, by making terrific use of the phrase ‘musclebound do-gooder.’

Elric of Melnibone masterfully subverts the stereotype of a musclebound do-gooder — by telling the tale of a weak-bodied, albino emperor of a decadent, declining kingdom who consumes drugs, takes lives, and aligns himself with the forces of chaos in order to gain strength and power.

You just don’t see the words ‘musclebound do-gooder’ used the way you used to, and we miss it.

George Kelley shows some love for Corum — also the subject of a handsome set of reprints from Titan Books last year.

Who doesn’t love Corum, the man with the Hand of Kwll and the Eye of Rhynn, who summons the undead from the underworld?

And Alan Phillips reminds us of The Warlord of the Air, the previous Moorcock series to get the deluxe treatment from Titan.

Being an alternative world, proto-steampunk, anti-colonialist adventure, The Warlord of the Air has everything one could ask for in a novel.

Finally, here’s Yagiz Erkan’s entry. Which we find a little confusing, because The Eternal Champion is both the title of a novel and Moorcok’s entire hero cycle, so we’re not sure what book he’s talking about.

In the first story featured in The Eternal Champion, Moorcock paints the picture of an anti-hero who is in disagreement with his own actions using a not-so-smooth prose.

Ah, what the hell. We’ll allow it.

Well, enough stalling. It’s time to announce our winners. Three winners were selected from the pool of eligible entries by the most reliable method known to modern science: D&D dice. 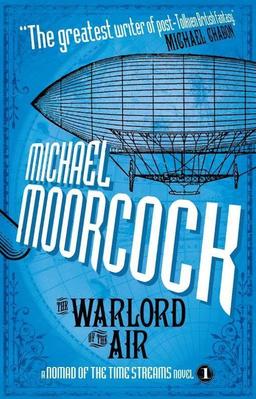 Once again, we’d like to thank Titan Books for providing the prizes and making the contest possible.

Thank you so much for a copy of THE FINAL PROGRAMME. I consider Michael Moorcock the best fantasy writer of the 20th Century (better than Lovecraft and Tolkien).

Glad to hear it, George. You’ve had quite the lucky streak in February!

It’s Luck of the Irish, John. You should know all about that with those wonderful eBay scores you’ve pulled off!