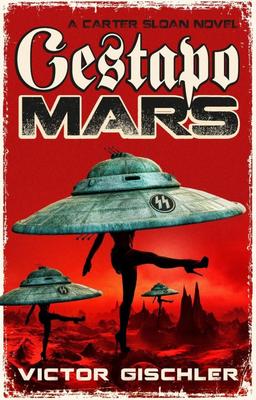 Last week we invited Black Gate readers to win one of three copies of Victor Gischler’s brand new novel of interstellar Nazi mayhem, Gestapo Mars, by submitting a one-sentence review of their favorite Nazi science fiction story. As you can imagine, we received a wide range of entries, and today we announce our three winners. Winners were selected from the pool of eligible entries by the most reliable method known to modern science: D&D dice.

Our first winner is Dave Ritzlin, who submitted this concise gem:

The Little People by John Christopher sucks, but it has a whip-wielding Nazi leprechaun on the cover, so that’s my favorite NS SF story.

Can’t argue with that. Our next winner is Don Carpenter:

Lightning! by Dean Koontz is my favorite Nazi Science Fiction because you don’t find out they’re involved until the origin of the mystery man is revealed. (Trying to avoid spoilers)

We appreciate the lack of spoilers, Don. Finally, congratulations to Kevin Walters, for his comic-themed entry:

The Nazis of Hellboy (first story arc) and their scheme to combine science & sorcery to rule the world but resulted in bringing Hellboy to Earth.

Although he didn’t win, we’d like to give a special shout-out to Chris La Tray for his entry:

I don’t know that it’s necessarily science fiction, but any time Captain America foils some out there Nazi plot to dominate the world, I’m 100% in.

We’re right with you, Chris.

Congratulations to the winners! Once again, we’d like to thank Titan Books for providing the prizes and making the contest possible.