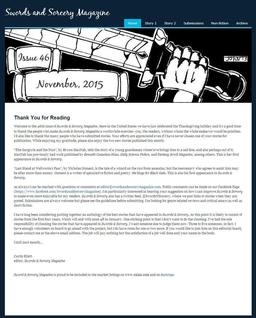 Issue 46 of Swords and Sorcery Magazine, cover-dated November 2015, is now available — with a brand new story by Black Gate blogger Nicholas Ozment. “Last Stand at Wellworm’s Pass” is the tale of one of the most feared and powerful mages in Rilsthorn, on the run from assassins and dread night creatures.

Editor Curtis Ellett is still looking for volunteers to help him select the contents of a Best of Swords and Sorcery Magazine anthology:

I have long been considering putting together an anthology of the best stories that have appeared in Swords & Sorcery. At this point it is likely to consist of stories from the first four years, which will end with issue 48 in January. One sticking point is that I don’t want to do the choosing. I’ve had the sole responsibility of choosing the stories that have appeared in Swords & Sorcery, I want someone else to judge them now. Three to five someones, in fact. I have enough volunteers on board to go ahead with the project, but I do have room for one or two more. If you would like to join him on this editorial board, please contact me at the above email address. The job will pay nothing but the satisfaction of a job well done and your name in the book.

Each issue of Swords and Sorcery Magazine contains two short stories, and is available free online. This issue contains stories by Brynn MacNab and Nicholas Ozment.

“The Gargoyle and the Nun,” by Brynn MacNab, tells the story of a young guardsman whose love brings him to a sad fate, and also perhaps out of it. MacNab has previously had work published by Beneath Ceaseless Skies, Daily Science Fiction, and Fantasy Scroll Magazine, among others. This is her first appearance in Swords & Sorcery.

“Last Stand at Wellworm’s Pass,” by Nicholas Ozment, is the tale of a wizard on the run from assassins, but the mercenary who agrees to assist him may be after more than money. Ozment is a writer of speculative fiction and poetry. He blogs for Black Gate. This is also his first appearance in Swords & Sorcery.

See our Late-November Fantasy Magazine Rack here, and all of our recent magazine coverage here.

I’m looking forward to read the story from the Great Nick Ozment. Am I reading this correctly that issue 48 will be the last or is this the last before you make the best of stories and there will be an issue 49?

Thanks, Wild Ape! I hope you enjoy it; I had fun writing it.

I may be wrong, but the way I read the announcement was that the best-of anthology would pull from the first four years (up through issue 48) but the online magazine will continue unabated.

I like the part where the wizard used the chameleon for a spell and how the pass got its name. That was clever.

I’m glad that the magazine will continue. Like Black Gate, who knows what future writers will traffic S&S magazine. Are there more Kor stories in the making? I hope so. I’m debating on sending in a story of my own.

I hope you do submit a story, Wild Ape. I’d look forward to reading it.