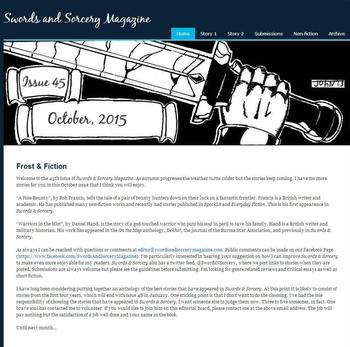 In his editorial Frost & Fire, editor Curtis Ellett repeats his call for volunteers to help him select the contents of a Best of Swords and Sorcery Magazine anthology:

I have long been considering putting together an anthology of the best stories that have appeared in Swords & Sorcery. At this point it is likely to consist of stories from the first four years, which will end with issue 48 in January. One sticking point is that I don’t want to do the choosing. I’ve had the sole responsibility of choosing the stories that have appeared in Swords & Sorcery, I want someone else to judge them now. Three to five someones, in fact. One brave soul has contacted me to volunteer. If you would like to join him on this editorial board, please contact me at the above email address. The job will pay nothing but the satisfaction of a job well done and your name in the book.

Each issue of Swords and Sorcery Magazine contains two short stories, and is available free online. This issue contains stories by Rob Francis and Daniel Hand.

“A Fine Bounty,” by Rob Francis, tells the tale of a pair of bounty hunters down on their luck on a fantastic frontier. Francis is a British writer and academic. He has published many non-fiction works and recently had stories published in SpeckLit and Everyday Fiction. This is his first appearance in Swords & Sorcery.

“Warriors in the Mist,” by Daniel Hand, is the story of a god-touched warrior who puts his soul in peril to save his family. Hand is a British writer and military historian. His work has appeared in the On the Map anthology, Dekho!, the journal of the Burma Star Association, and previously in Swords & Sorcery.

See our mid-October Fantasy Magazine Rack here, and all of our recent magazine coverage here.

Now that’s something I could see myself reading. Even though my experience with S&S collections in the last years was just plain horrible. But a fan selected Best Of could get it right and actually make it about Sword & Sorcery and not just generic fantasy stories.

You could be right, Martin. Have you thought about signing up to be a judge?