Here we are again, friends, with a passel of new heroic fantasy tales to extol. And September was a splendid month for new stories. In fact, one is in contention for my favorite of the year so far…

…and I’ll start with that particular story: “Poor Bright Folk” by James Lecky in the latest issue of Curtis Ellett’s Swords and Sorcery Magazine, #44. Elathan is a bard of the Aos Si (more commonly called the Sidhe, or fey folk) traveling through the once brightly-colored land of Orialla. On entering a forest glade he meets a woman whose very appearance unnerves him:

Her hair hung in a long braid almost as far as her knees, deep lines marked her cheeks and forehead, yet she stood straight as a staff, her movements fluid and easy. Her clothing – a straight dress and a short cape – were a patchwork of various colours and materials, some smooth and strong, others coarse and faded.

The sight of her disturbed me in a way I could not give voice to and I wished for nothing more than to be away from this place and this strange woman.

Her name is Mual and when she asks him to play for her at her home he finds himself saying yes in words that seem to come from outside himself.

In Mual’s castle Elathan discovers she is working a vampiric sort of magic over her servants and now him. To escape her clutches and free his fellow captives the bard must use his wit and wiles. Lecky didn’t try, thankfully, to emulate some sort of old-timey style with his prose, yet “Poor Bright Folk” has the feel and resonance of the best fairy tales from out of the deeps of time.

“Truth Be Told” by Reid Perkins is, dare I say it, a charming tale, set in a village in a fairy tale land. The town’s boys, when they come of age, must face the challenge of stealing a scale from the dragon that lives in a nearby valley. As Saug prepares to make his expedition to the dragon’s lair he begins to realize the stories told by those who’ve gone before him are not adding up. With trepidation he leaves his home in search of the beast that is said to “scorch the ground beneath it simply for its own sick amusement.” What he finds and what he does about it is perfectly told. This appears to be Perkins’ first published story and I hope to see more by him soon.

As John Fultz asserted in an essay in Grimdark #4, there’s a very good case to be made for claiming grimdark as the new swords & sorcery. By his content choices in Grimdark Magazine #5, editor Adrian Collins only bolsters this assertion.

The issue’s very first story, “Lessons of Necessity” by T.C. Powell, is a reminder that grimdark needn’t be fantasy. Sometimes it can be about a mother with terminal cancer trying to teach her twelve-year-old son what he’ll need to know in order to survive the zombie apocalypse. Short, dark, and brutal. I’m not a big fan of zombie stories (too many, too similar, etc.), but with its focus on maternal love, this is good. 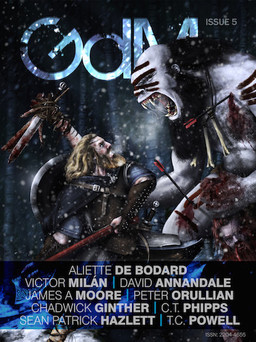 “First They Came For the Pigs” by Chadwick Ginther is a wonderfully weird story about a moneylender who has fallen afoul of Cygaricus, a fungoid thing called “the god of shit and muck and what things grow there,” or “the Vile Truffle.” The man hires a band of the worst cutthroats in the city of Khyber and with them goes into the black tunnels of the Undercity to take the Vile Truffle out. There’s not much more to the story than brutal nastisness, and it’s great. Not surprisingly, the story’s a reprint from an anthology of mushroom-themed stories titled Fungi from Innsmouth Free Press.

Some people can’t stand the baby boomer generation, what with hippies, the Me Generation, and bellbottoms. Sometimes I’m one of those people. But I can’t see myself going as far as the narrator of Sean Patrick Hazlett’s wickedly satirical “Boomer Hunter.” It’s a story that had me chuckling out loud several times.

When the Chinese called their treasury bonds, interest rates went ballistic, and Uncle Sam needed a quick fix to service its ballooning interest. Hiking up the death tax was the easy part, but the goddamn boomers wouldn’t die fast enough. So the feds passed the Septuagenarian Protection Act of 2020 to accelerate the process.

When the law was passed the bulk of the boomers were rounded up and sent to resettlement centers where no one really knew what happened to them. But a large contingent, particularly those with combat experience, have proved more intractable. So bounty hunters like the narrator are sent out to round them up. Things take a turn for the worse for him when he’s sent to bring in Alvarez, a nearly eighty-year-old Viet Nam Marine vet.

As in earlier issues, #5 includes an excerpt from a recent novel, this time Victor Milán’s The Dinosaur Lords (discussed here at Black Gate). The excerpt presents a disastrous short and sharp encounter between a party of knights atop duckbilled dinosaurs and soldiers mounted on triceratops. I’d never read anything by Milán before and his writing is clean and precise. Unfortunately, unless you’re immediately hooked by the thought of knights on dinosaurs (which I freely admit is pretty darn enticing), it’s a tough introduction to the novel. Instead of being caught up in the debate over battlefield tactics and the fight, I became distracted by the welter of character and place names. The book’s world is a complex one and I’m not sure a short snippet’s able to do it proper justice.

David Annadale’s “The Right Hand of Decay” is a moody work about a queen who is able to back up her threat to destroy her enemy with awful magic. There’s little action to this appropriately grim story, but there is more than enough horrifying imagery:

Harrad looked at the immese mound of bodies. His gut twisted. It was a monstrosity, not a funeral pyre. Soldiers climbed to the top, crushing limbs beneath their feet, hauling more corpses, tossing them to the peak. Most of the dead had been collected now. The troops not involved in the assembly of the mound lined up at its base.

The last piece of fiction in the issue is “Against The Encroaching Darkness” by Aliette De Bodard. In an alternate Paris, fallen angels rule over a city devastated by war and sorcery. In the wake of the death of its founder, House Lazarus’ new leader, Victoire, is trying to figure out what to do next. Faced with many more powerful houses, in fear of the future, she is approached by Morningstar, the head of the leading house, Silverspires. Like Milán’s world, Bodard’s appears to be complicated and in need of far more pages to afford the reader a proper introduction to it.

Collins has included a number of reviews, essays, and interviews. C.T. Phipps’ contribution, “Who is the Grimdark Hero?” provides a nice overview of several past and present grimdark protagonists. In addition to discussing their own fiction, the interviews with James A. Moore and Peter Orullian give each the opportunity to speak to what they think of grimdark and where they see themselves in relation to it. Oh, and Orullian gives a shout out to his friend Terry Brooks, pointing out that for a man who is fairly neglected in discussions of the fantasy genre, he does have “like 35 New York Times bestsellers.”

So there’s a pair of free stories, and a batch of six stories and articles for a mere $2.99.  That’s eight new tales you should be checking out for your wonderment and enjoyment. I know I said I’d look at Fantasy Scroll and I will — next month. Till October, just keep reading.

[…] his September Short Story Roundup, which appeared here in Tuesday, Fletcher Vredenburgh speaks very highly of one of this […]

2015 Writing Statistics and Revenue | Reflections of a Rational Republican

2015 Writing Statistics and Revenue – Through a Glass Darkly