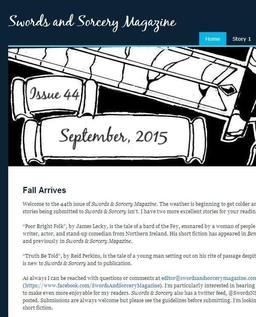 In his September Short Story Roundup, which appeared here in Tuesday, Fletcher Vredenburgh speaks very highly of one of this issue’s stories, “Poor Bright Folk” by James Lecky, which Fletcher says “is in contention for my favorite of the year so far.”

Elathan is a bard of the Aos Si (more commonly called the Sidhe, or fey folk) traveling through the once brightly-colored land of Orialla. On entering a forest glade he meets a woman whose very appearance unnerves him… Her name is Mual and when she asks him to play for her at her home he finds himself saying yes in words that seem to come from outside himself.

In Mual’s castle Elathan discovers she is working a vampiric sort of magic over her servants and now him. To escape her clutches and free his fellow captives the bard must use his wit and wiles. Lecky didn’t try, thankfully, to emulate some sort of old-timey style with his prose, yet “Poor Bright Folk” has the feel and resonance of the best fairy tales from out of the deeps of time.

“Poor Bright Folk” by James Lecky, is the tale of a bard of the Fey, ensnared by a woman of people even more ancient and eldritch than his. Lecky is a writer, actor, and stand-up comedian from Northern Ireland. His short fiction has appeared in Beneath Ceaseless Skies, Heroic Fantasy Quarterly, Arcane, and previously in Swords & Sorcery Magazine.

“Truth Be Told” by Reid Perkins, is the tale of a young man setting out on his rite of passage despite the obvious lies of those who have gone before. Perkins is new to Swords & Sorcery and to publication.