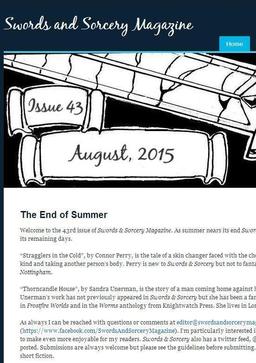 “Stragglers in the Cold,” by Connor Perry, is the tale of a skin changer faced with the choice of dying of starvation in the snow or breaking the rules of his kind and taking another person’s body. Perry is new to Swords & Sorcery but not to fantasy. His work can be seen on-line in his web serial, Monsters of Nottingham.

“Thorncandle House,” by Sandra Unerman, is the story of a man coming home against his will to a house that wants him more than he wants it. Unerman’s work has not previously appeared in Swords & Sorcery but she has been a fantasy writer for many years. She has recently published stories in Frostfire Worlds and in the Worms anthology from Knightwatch Press. She lives in London and is a member of the Clockhouse Writers’ Group.