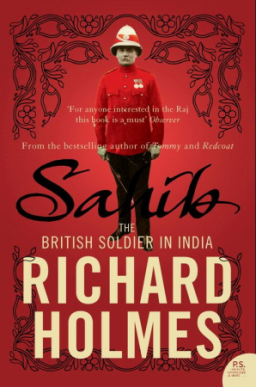 If you are in the Northumbrian town of Alnwick, chasing Hogwarts or visiting the Hotspur School of Defence, stop by Barter Books — it’s like that library in Name of the Rose, except all the books are for sale and the coffee’s better. Imagine a Victorian station turned into a used book store and you’re there.

It’s where I get random stuff, or regret not buying it. For example, there was this 1930s book on WWI air warfare in Bulgaria but it was too pricy, and now I wish I’d splashed out anyway…

“Make your choice, adventurous Stranger,
Strike the bell and bide the danger,
Or wonder, till it drives you mad,
What would have followed if you had.” (CS Lewis)

In the past, I returned to Edinburgh laden with Leigh Brackett books. This time, among my finds was a copy of Sahib: The British Soldier in India by Richard Holmes.

It’s a book you can read as history, especially if you are British, but also as context for Steampunk and Space Opera.

The Empire casts a long shadow on our islands.

If you explore Scottish castles and grand houses, there’s always a room with swords decking the walls, bits of uniform, trophies from India, and portraits of young men in red coats. It’s nice, then, to find out where they went, though shocking to discover how few returned.

The empire didn’t just draw on the aristocrats. My own poverty-stricken great great grandfather joined the Sherwood Foresters rather than sponge off his newly-wed brother. There’s a good chance he fought in Tibet, and on the North West Frontier, modern Pakistan (my grandmother, 99, keeps recognizing placenames on the news). He reached the rank of sergeant, once shot a man-eating tiger, and returned to Nottingham in his 40s, bringing home a monkey — that went to the zoo — spears, antlers, an Afghan sleeve dagger that hangs on my wall as I type this… and malaria.

Like a roleplaying sourcebook, Holmes puts us in the boots of both officers and “other ranks.” It’s all in there — bungalows and hill stations, the overabundance of specialised native servants, native wives, battles and last stands, medical care, homesickness, mental health — we Brits still use the term doolally to refer to a “obviously a bit crazy”, its origins being the hospital where the burnouts stayed prior to return to Blighty — disease, death, more death, execution by being strapped to a canon, elephants as part of your logistics, and plenty of stiff upper lips.

If your interest is historical, read a popular account of British India first, or at least get into the Flashman books (which got me through my high school history). This book is thematic rather than narrative. Holmes brings to life the famous names and well-known wars of yesteryear, but it helps if you already know who and what they were.

You can also read Sahib as research or background for our kind of literature.

Victorian England doesn’t make sense without the Empire, so if you like or write Steampunk with a specifically Victorian feel, then this is a good — if not always comfortable — read.

However, I found myself reading as a fan of old Space Opera and Sword and Planet. After all, when American pre-WWII writers wrote about space empires, they had one big obvious example to hand.

And the resonance is there.

The British in India went through several phases, each rippling out from the colonial centers of power, and each reflected in Pulp Science Fiction:

For British incomers, Indian culture quickly stops being exotic and starts being a fact of life. British and locals enjoy a mutual but wary respect. It’s not always clear who comes out on top, however the incomers often have useful technical knowledge, and less to lose. Thus, John Carter-style adventurers make their fortune, sometimes marry a princess (or two), and more or less “go native”.

This never quite stops, and you can find mercenaries and soldiers of fortune on the fringes of the empire right into the later 19th century.

British have an increasingly strong sense of being the natural rulers, but still within the matrix of Indian culture.

People still intermarry. Imperial armies are made up of local troops, including contingents supplied by semi-independent allies.

The British, at least as they see themselves, are a lot like Edmond Hamilton’s Star Kings, benignly ruling over a multi-ethnic empire made up of loyal subject peoples, some with warrior cultures.

Again, this never quite goes away. Even as the officer class British became more divorced from India, the active soldiers bond over soldiering, for example Highlanders and Sikhs find common ground in martial and highland traditions.

The British become influenced by pseudo scientific racism, missionary zeal, and snobbery, much of this fostered by wives shipped in from Britain — don’t blame them, though, you try to think straight and be even tempered while wearing corsets and caring for cholera-ridden children, with only a parochial Victorian education with which to make sense of your new experiences!

This is much like Leigh Brackett’s vision of Mars, with Earthmen administering a world of — to them — exotic barbarians; Not that she wholly sides with the colonialists, of course — her hero, John Stark, is a hangover from Barsoom.

“British go home!” And we did, eventually. Mostly outside the scope of Holmes’s book, but much like colonial Mars as portrayed by Lin Carter. Pretty unedifying.

Empires, of course, are nowadays — and always were, in some quarters — held to be a Bad Thing.

This book is a reminder that for most of the players, empire was also a Fixed Thing, just part of the landscape they had to navigate in order to survive and thrive. In doing this some of them had interesting adventures, or performed awe-inspiring feats of arms.

Though we might judge them harshly from the big picture viewpoint, I think we can still regard the British men and women with their boots on the ground as interesting human beings, some worthy of respect even now.

Is this an approach that could let us revisit pre-modern adventures in far off places? Or do the old imperialist and racist tropes simply have too much gravity?

Can the comparatively recent imperial past be an escapist playground? Or is it all too unpleasant?

M Harold Page (www.mharoldpage.com) has written more historical fiction than he expected, but is soon making up for it by launching an old-school Heroic Fantasy trilogy, Swords Versus Tanks. While you’re waiting for that, you can buy his action-packed Dark Age adventure, Shieldwall: Barbarians! (UK, Epub) and also learn how to plan and write your novels using Storyteller Tools (UK, Epub).

You got me – Barter Books, I go there every time I visit Northumberland. Sherwood Foresters – both my grandfathers served with the regiment in WW1. On to the meat of your article, the East India Company encouraged their agents to intermarry, though not necessarily with a princess! It was seen as a method of promoting trade and understanding. When the East India Company failed and the British government had to wade in, then India became prey to colonization and occupation. I’m not disagreeing with your argument – far from it. But, given that assimilation was seen as a legitimate method of trade, I feel that the book you picked up needs a sequel which shows how people came out to India with all manner of British imperialist and racist belief and were transformed by the culture of India. Neil

My great uncle was also Sherwood Foresters in WWI! He was mentioned in despatches – family legend has it he was away from the front, came back and found his entire battalion had been wiped out. Hence the oakleaf on his medals.
(That H isn’t “Hopcraft” is it?)

Re the East India company and integration, yes the book does cover that, including stories of happy marriages as well as Madam Butterfly tragedies. Don’t recall accounts of views changing, though. A book must exist…

I’m reading the first volume of “The Last Lion” and I can’t help but relate all the Victorian and colonial references to “Flashman.” I like your points regarding Sword and Planet novels, a genre I have a certain affection for.

No, the H is for Harvey which was my paternal grandfather’s name. I hardly knew him as he died when I was 7. My brother tells stories of how he talked about that war. I believe my maternal grandfather lied about his age, when he enlisted. He never talked about his experiences – probably too horrible to talk about. So, all I know, really is that they both served in the Sherwood Foresters! Neil

Mr. Page, if this was a hockey game you would have scored a hat trick—-Flashman, Steampunk, the Victorian Age, and Lin Carter!

I have a special place in my heart for the Ghurkas. I also have a deep respect for the British military and their fine traditions. I learned to appreciate Kipling during one of my encounters with them. I like that y’all name your units like that. It just screams heritage and honor.

[…] 300 without the attack rhinos, Greece versus the known world, and — best of all — the Persian Wars from the Persian perspective. You can see how Persian Fire by Tom Holland ended up as another one of my Barter Books finds. […]